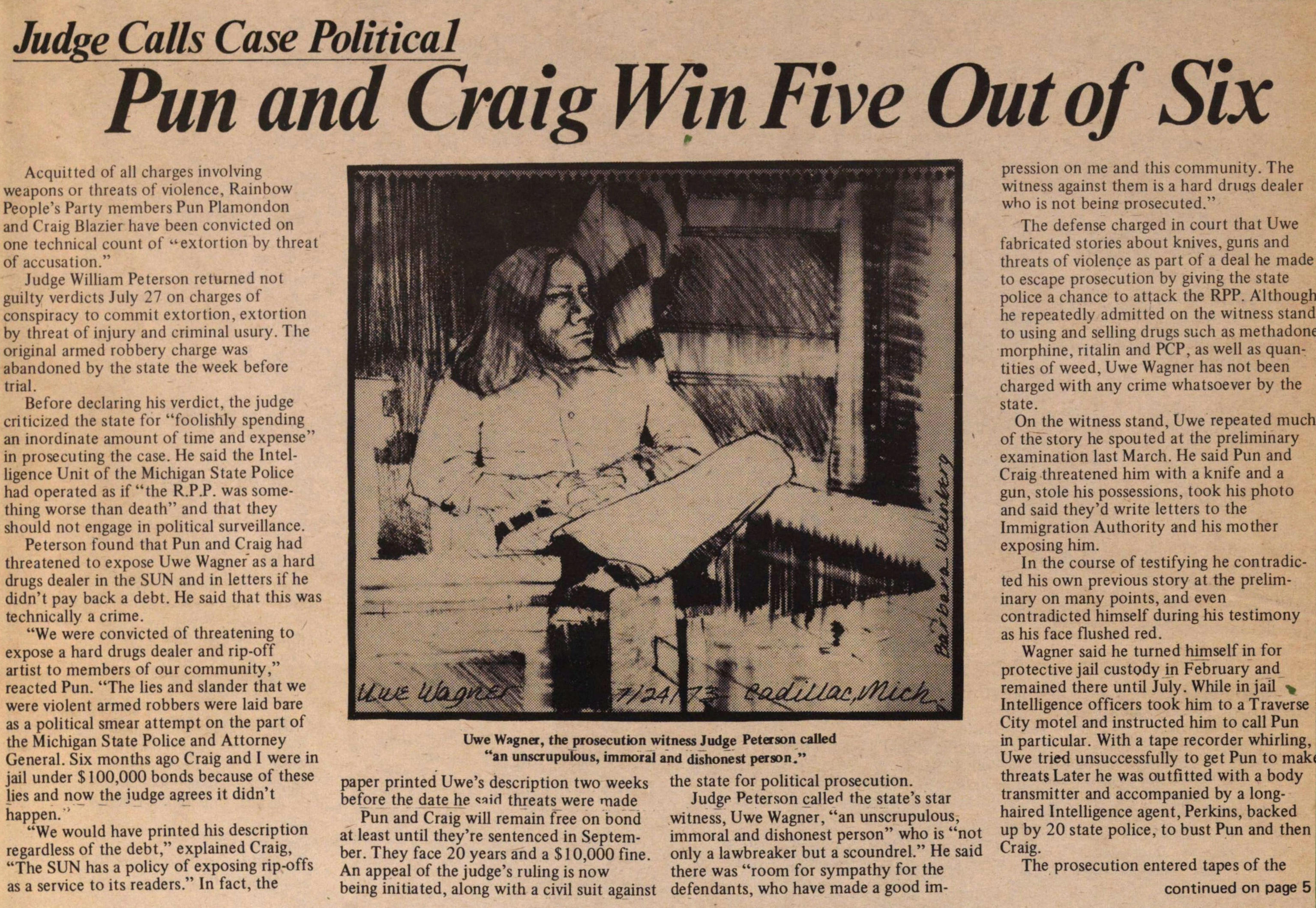 Pun and Craig Win Five Out of Six

Acquitted of all charges involving weapons or threats of violence, Rainbow People's Party members Pun Plamondon and Craig Blazier have been convicted on one technical count of "extortion by threat of accusation."

Judge William Peterson returned not guilty verdicts July 27 on charges of conspiracy to commit extortion, extortion by threat of injury and criminal usury. The original armed robbery charge was abandoned by the state the week before trial.

Before declaring his verdict, the judge criticized the state for "foolishly spending an inordinate amount of time and expense" in prosecuting the case. He said the Intelligence Unit of the Michigan State Police had operated as if "the R.P.P. was something worse than death" and that they should not engage in political surveillance.

Peterson found that Pun and Craig had threatened to expose Uwe Wagner as a hard drugs dealer in the SUN and in letters if he didn't pay back a debt. He said that this was technically a crime.

"We were convicted of threatening to expose a hard drugs dealer and rip-off artist to members of our community," reacted Pun. "The lies and slander that we were violent armed robbers were laid bare as a political smear attempt on the part of the Michigan State Police and Attorney General. Six months ago Craig and I were in jail under $100,000 bonds because of these lies and now the judge agrees it didn't happen.

"We would have printed his description regardless of the debt," explained Craig, "The SUN has a policy of exposing rip-offs as a service to its readers." In fact, the paper printed Uwe's description two weeks before the date he said threats were made.

Pun and Craig will remain free on bond at least until they're sentenced in September. They face 20 years and a $ 10,000 fine. An appeal of the judge's ruling is now being initiated, along with a civil suit against the state for political prosecution.

Judge Peterson called the state's star witness, Uwe Wagner, "an unscrupulous, immoral and dishonest person" who is "not only a lawbreaker but a scoundrel." He said there was "room for sympathy for the defendants, who have made a good impression on me and this community. The witness against them is a hard drugs dealer who is not being prosecuted."

The defense charged in court that Uwe fabricated stories about knives, guns and threats of violence as part of a deal he made to escape prosecution by giving the state police a chance to attack the RPP. Although he repeatedly admitted on the witness stand to using and selling drugs such as methadone, morphine, ritalin and PCP, as well as quantities of weed, Uwe Wagner has not been charged with any crime whatsoever by the state.

On the witness stand, Uwe repeated much of the story he spouted at the preliminary examination last March. He said Pun and Craig threatened him with a knife and a gun, stole his possessions, took his photo and said they'd write letters to the Immigration Authority and his mother exposing him.

In the course of testifying he contradicted his own previous story at the preliminary on many points, and even contradicted himself during his testimony as his face flushed red.

Wagner said he turned himself in for protective jail custody in February and remained there until July. While in jail Intelligence officers took him to a Traverse City motel and instructed him to call Pun in particular. With a tape recorder whirling, Uwe tried unsuccessfully to get Pun to make threats.  Later he was outfitted with a body transmitter and accompanied by a long-haired Intelligence agent, Perkins, backed up by 20 state police, to bust Pun and then Craig.

The prosecution entered tapes of the