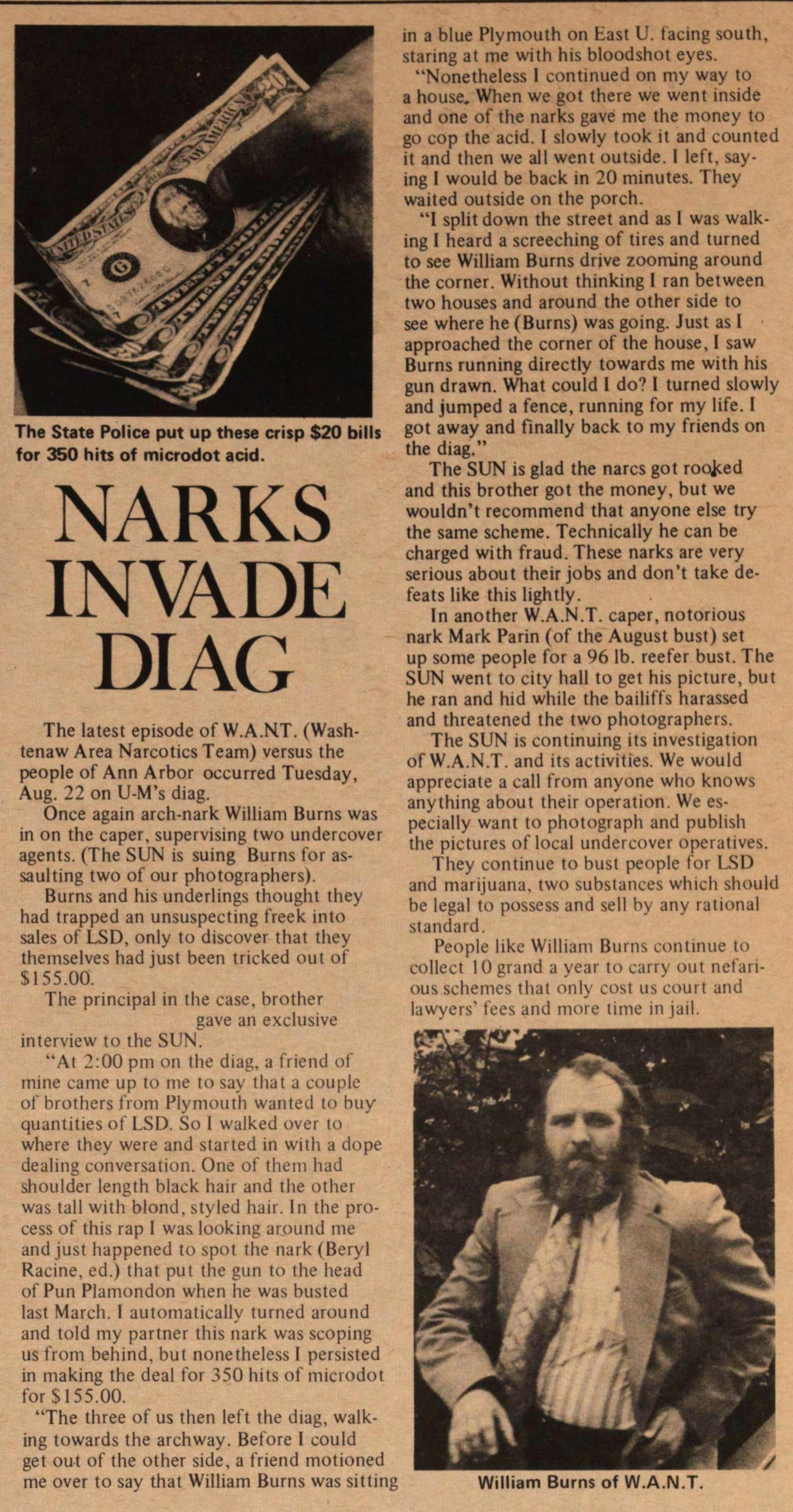 Once again arch-nark William Burns was in on the caper, supervising two undercover agents. (The SUN is suing Burns for assaulting two of our photographers).

Burns and his underlings thought they had trapped an unsuspecting freek into sales of LSD, only to discover that they themselves had just been tricked out of $155.00.

The principal in the case, brother            gave an exclusive interview to the SUN.

"At 2:00 pm on the diag, a friend of mine came up to me to say that a couple of brothers from Plymouth wanted to buy quantities of LSD. So I walked over to where they were and started in with a dope dealing conversation. One of them had shoulder length black hair and the other was tall with blond, styled hair. In the process of this rap I was looking around me and just happened to spot the nark (Beryl Racine, ed.) that put the gun to the head of Pun Plamondon when he was busted last March. I automatically turned around and told my partner this nark was scoping us from behind, but nonetheless I persisted in making the deal for 350 hits of microdot for $155.00.

"The three of us then left the diag, walking towards the archway. Before I could get out of the other side, a friend motioned me over to say that William Burns was sitting in a blue Plymouth on East U. facing south, staring at me with his bloodshot eyes.

"Nonetheless I continued on my way to a house. When we got there we went inside and one of the narks gave me the money to go cop the acid. I slowly took it and counted it and then we all went outside. I left, saying I would be back in 20 minutes. They waited outside on the porch.

"I split down the street and as I was walking I heard a screeching of tires and turned to see William Burns drive zooming around the corner. Without thinking I ran between two houses and around the other side to see where he (Burns) was going. Just as I approached the corner of the house, I saw Burns running directly towards me with his gun drawn. What could I do? I turned slowly and jumped a fence, running for my life. I got away and finally back to my friends on the diag."

The SUN is glad the narcs got rooked and this brother got the money, but we wouldn't recommend that anyone else try the same scheme. Technically he can be charged with fraud. These narks are very serious about their jobs and don't take defeats like this lightly.

In another W.A.N.T. caper, notorious nark Mark Parin (of the August bust) set up some people for a 96 lb. reefer bust. The SUN went to city hall to get his picture, but he ran and hid while the bailiffs harassed and threatened the two photographers.

The SUN is continuing its investigation of W.A.N.T. and its activities. We would appreciate a call from anyone who knows anything about their operation. We especially want to photograph and publish the pictures of local undercover operatives.

They continue to bust people for LSD and marijuana, two substances which should be legal to possess and sell by any rational standard.

People like William Burns continue to collect 10 grand a year to carry out nefarious schemes that only cost us court and lawyers' fees and more time in jail.

The State Police put up these crisp $20 bills for 350 hits of microdot acid.