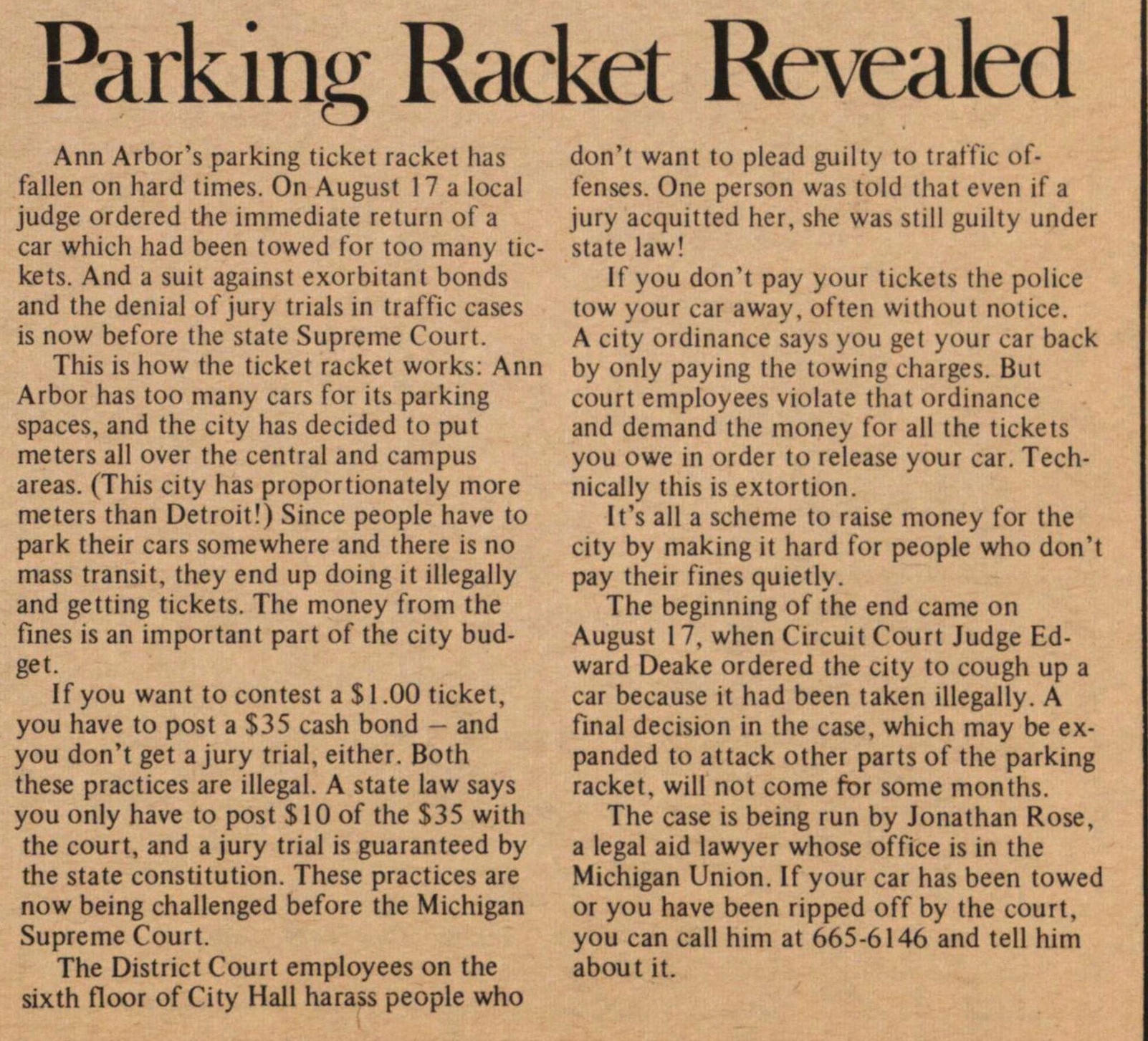 Ann Arbor's parking ticket racket lias fallen on hard times. On August 1 7 a local judge ordered the immediate return of a car which had been towed for too many tickets. And a suit against exorbitant bonds and the denial of jury trials in traffic cases is now before the state Supreme Court. This is how the ticket racket works: Ann Arbor has too many cars for its parking spaces, and the city has decided to put meters all over the central and campus areas. (This city has proportionately more meters than Detroit!) Since people have to park their cars somewhere and there is no mass transit, they end up doing it illegally and getting tickets. The money from the fines is an important part of the city budget. If you want to contest a $1 .00 ticket, you have to post a $35 cash bond - and you don't get a jury trial, either. Both these practices are Ilegal. A state law says you only have to post $10 of the $35 with the court, and a jury trial is guaranteed by the state constitution. These practices are now being challenged before the Michigan Supreme Court. The District Court employees on the sixth floor of City Hall harass people who don't want to plead guilty to tratïic oft'enses. One person was told that even if a jury acquitted her, she was still guilty under state law! If you don't pay your tickets the pólice tow your car away, often without notice. A city ordinance says you get your car back by only paying the towing charges. But court employees viólate that ordinance and demand the money for all the tickets you owe in order to release your car. Technically this is extortion. It's all a scheme to raise money for the city by making it hard for people who don't pay their fines quietly. The beginning of the end carne on August 1 7, when Circuit Court Judge Edward Deake ordered the city to cough up a car because it had been taken illegally. A final decisión in the case, which may be expanded to attack other parts of the parking racket, will not come for some months. The case is being run by Jonathan Rose, a legal aid lawyer whose office is in the Michigan Union. If your car has been towed or you have been ripped off by the court, you can cali him at 665-6146 and teil him about it.