A2 Bars Getting Down Uptown 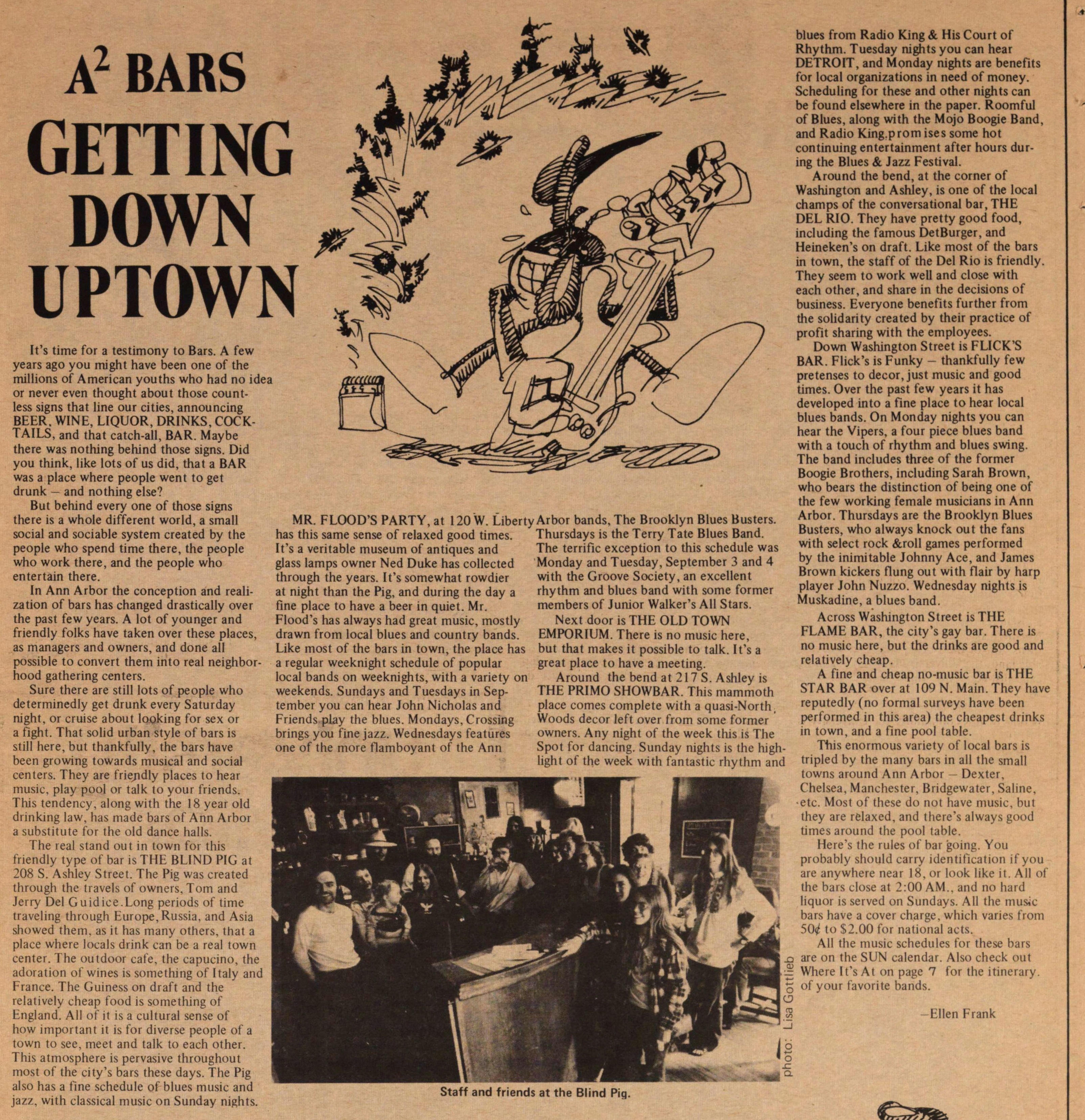 A2 BARS GETTING DOWN UPTOWN

It's time for a testimony to Bars. A few years ago you might have been one of the millions of American youths who had no ides or never even thought about those countless signs that line our cities, announcing BEER. WINE, LIQUOR, DRINKS, COCKTAILS, and that catch-all, BAR. Maybe there was nothing behind those signs. Did you think, like lots of us did, that a BAR was a place where people went to get drunk - and nothing else?

In Ann Arbor the conception and realization of bars has changed drastically over the past few years. A lot of younger and friendly folks have taken over these places, as managers and owners, and done all possible to convert them into real neighborhood gathering centers.

Sure there are still lots of people who determinedly get drunk every Saturday night, or cruise about looking for sex or a fight. That solid urban style of bars is still here, but thankfully, the bars have been growing towards musical and social centers. They are friendly places to hear music, play pool or talk to your friends. This tendency , along with the 18 year old drinking law, has made bars of Ann Arbor a substitute for the old dance halls.

The real stand out in town for this friendly type of bar is THE BLIND PIG at 208 S. Ashley Street. The Pig was created through the travels of owners. Tom and Jerry Del Guidice. Long periods of time traveling through Europe,Russia, and Asia showed them, as it has many others, that a place where locals drink can be a real town center. The outdoor cafe, the cappuccino, the adoration of wines is something of Italy and France. The Guinness on draft and the relatively cheap food is something of England. All of it is a cultural sense of how important it is for diverse people of a town to see, meet and talk to each other. This atmosphere is pervasive throughout most of the city's bars these days. The Pig also has a fine schedule of blues music and jazz, with classical music on Sunday nights.

MR. FLOOD'S PARTY, at 120 W. Liberty has this same sense of relaxed good times. It's a veritable museum of antiques and glass lamps owner Ned Duke has collected through the years. It's somewhat rowdier at night than the Pig, and during the day a fine place to have a beer in quiet. Mr. Flood's has always had great music, mostly drawn from local blues and country bands. Like most of the bars in town, the place has a regular weeknight schedule of popular local bands on weeknights, with a variety on weekends. Sundays and Tuesdays in September you can hear John Nicholas and Friends play the blues. Mondays, Crossing brings you fine jazz. Wednesdays features one of the more flamboyant of the Ann Arbor bands, The Brooklyn Blues Busters. Thursdays is the Terry Tate Blues Band. The terrific exception to this schedule was Monday and Tuesday, September 3 and 4 with the Groove Society, an excellent rhythm and blues band with some former members of Junior Walker's All Stars.

Next door is THE OLD TOWN EMPORIUM. There is no music here, but that makes it possible to talk. It's a great place to have a meeting.

Around the bend at 217 S. Ashley is THE PRIMO SHOWBAR. This mammoth place comes complete with a quasi-North Woods decor left over from some former owners. Any night of the week this is The Spot for dancing. Sunday nights is the highlight of the week with fantastic rhythm and blues from Radio King & His Court of Rhythm. Tuesday nights you can hear DETROIT, and Monday nights are benefits for local organizations in need of money. Scheduling for these and other nights can be found elsewhere in the paper. Roomful of Blues, along with the Mojo Boogie Band, and Radio King promises some hot continuing entertainment after hours during the Blues & Jazz Festival.

Around the bend, at the corner of Washington and Ashley, is one of the local champs of the conversational bar, THE DEL RIO. They have pretty good food, including the famous DetBurger, and Heineken's on draft. Like most of the bars in town, the staff of the Del Rio is friendly. They seem to work well and close with each other, and share in the decisions of business. Everyone benefits further from the solidarity created by their practice of profit sharing with the employees.

Down Washington Street is FLICK'S BAR. Flick's is Funky - thankfully few pretenses to decor, just music and good times. Over the past few years it has developed into a fine place to hear local blues bands. On Monday nights you can hear the Vipers, a four piece blues band with a touch of rhythm and blues swing. The band includes three of the former Boogie Brothers, including Sarah Brown, who bears the distinction of being one of the few working female musicians in Ann Arbor. Thursdays are the Brooklyn Blues Busters, who always knock out the fans with select rock &roll games performed by the inimitable Johnny Ace, and James Brown kickers flung out with flair by harp player John Nuzzo. Wednesday nights is Muskadine, a blues band.

Across Washington Street is THE FLAME BAR, the city's gay bar. There is no music here, but the drinks are good and relatively cheap.

A fine and cheap no-music bar is THE STAR BAR over at 109 N. Main. They have reputedly (no formal surveys have been performed in this area) the cheapest drinks in town, and a fine pool table.

This enormous variety of local bars is tripled by the many bars in all the small towns around Ann Arbor - Dexter, Chelsea, Manchester, Bridgewater, Saline, etc. Most of these do not have music, but they are relaxed, and there's always good times around the pool table.

Here's the rules of bar going. You probably should carry identification if you are anywhere near 18, or look like it. All of the bars close at 2:00 AM., and no hard liquor is served on Sundays. All the music bars have a cover charge, which varies from $0.50 to $2.00 for national acts.

All the music schedules for these bars are on the SUN calendar. Also check out Where It's At on page 7 for the itinerary of your favorite bands. -Ellen Frank

Staff and friends at the Blind Pig.