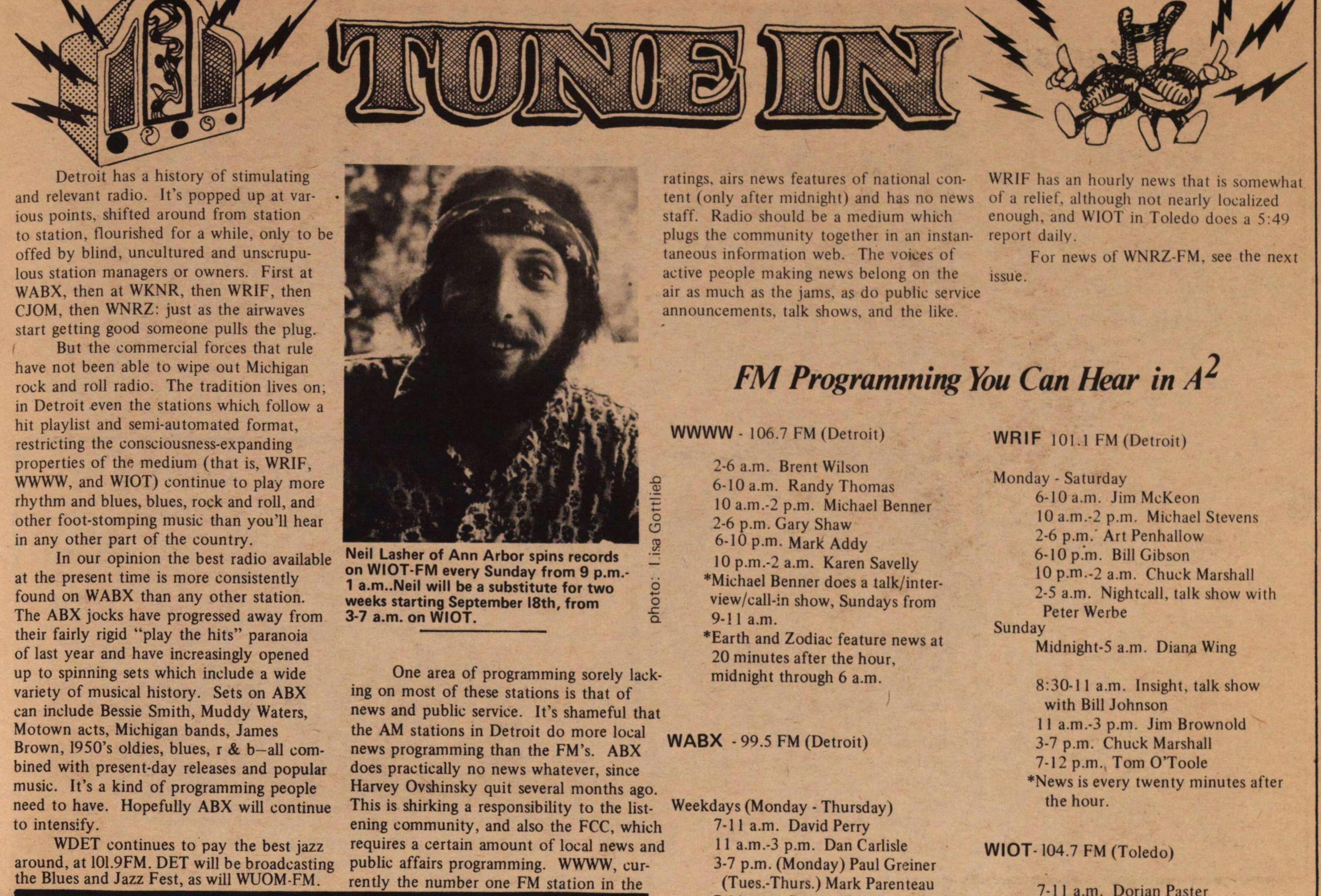 Detroit has a history of stimulating and relevant radio. It's popped up at various points, shifted around from station to station, flourished for a while, only to be offed by blind, uncultured and unscrupulous station managers or owners. First at WABX, then at WKNR, then WRIF, then CJOM, then WNRZ: just as the airwaves start getting good someone pulls the plug.

But the commercial forces that rule have not been able to wipe out Michigan rock and roll radio. The tradition lives on; in Detroit even the stations which follow a hit playlist and semi-automated format, restricting the consciousness-expanding properties of the medium (that is, WRIF, WWWW, and WIOT) continue to play more rhythm and blues, blues, rock and roll, and other foot-stomping music than you'll hear in any other part of the country.

In our opinion the best radio available at the present time is more consistently found on WABX than any other station. The ABX jocks have progressed away from their fairly rigid "play the hits" paranoia of last year and have increasingly opened up to spinning sets which include a wide variety of musical history. Sets on ABX can include Bessie Smith, Muddy Waters, Motown acts, Michigan bands, James Brown, 1950's oldies, blues, r & b -- all combined with present-day releases and popular music. It's a kind of programming people need to have. Hopefully ABX will continue to intensify.

WDET continues to pay the best jazz around, at 101.9 FM. DET will be broadcasting the Blues and Jazz Fest, as will WUOM-FM.

One area of programming sorely lacking on most of these stations is that of news and public service. It's shameful that the AM stations in Detroit do more local news programming than the FM's. ABX does practically no news whatever, since Harvey Ovshinsky quit several months ago. This is shirking a responsibility to the listening community, and also the FCC, which requires a certain amount of local news and public affairs programming. WWWW, currently the number one FM station in the ratings, airs news features of national content (only after midnight) and has no news staff. Radio should be a medium which plugs the community together in an instantaneous information web. The voices of active people making news belong on the air as much as the jams. as do public service announcements, talk shows, and the like. WRIF has an hourly news that is somewhat of a relief, although not nearly localized enough, and WIOT in Toledo does a 5:49 report daily.

For news of WNRZ-FM. see the next issue.

Programming You Can Hear in A2

*Michael Benner does a talk/interview/call-in show, Sundays from 9-11 a.m.

*Earth and Zodiac feature news at 20 minutes after the hour, midnight through 6 a.m.

*News is every twenty minutes after the hour

photo caption -- Neil Lasher of Ann Arbor spins records on WIOT-FM every Sunday from 9 p.m. - 1 a.m.. Neil will be a substitute for two weeks starting September 18th, from 3-7 a.m. on WIOT.