Play It Again, One String 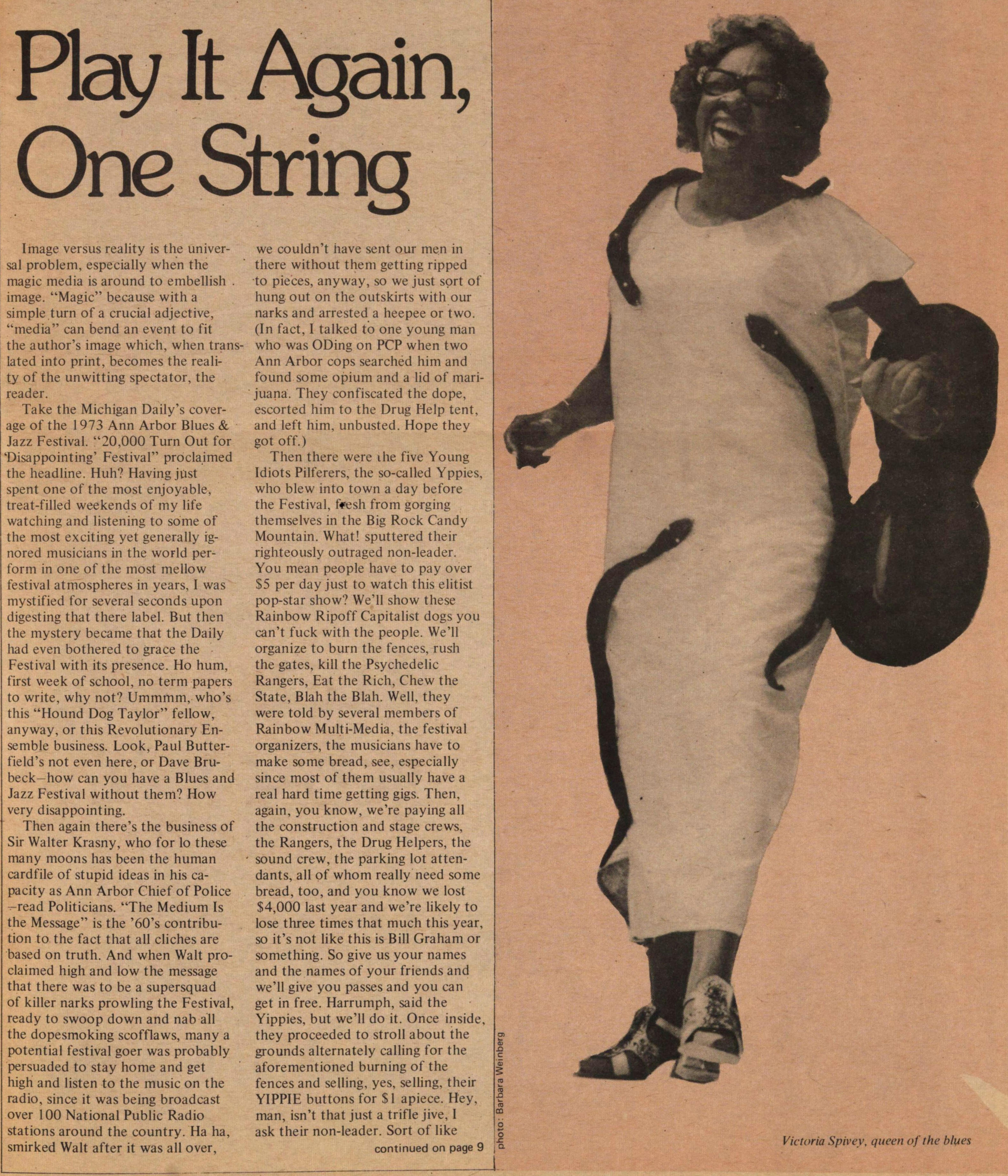 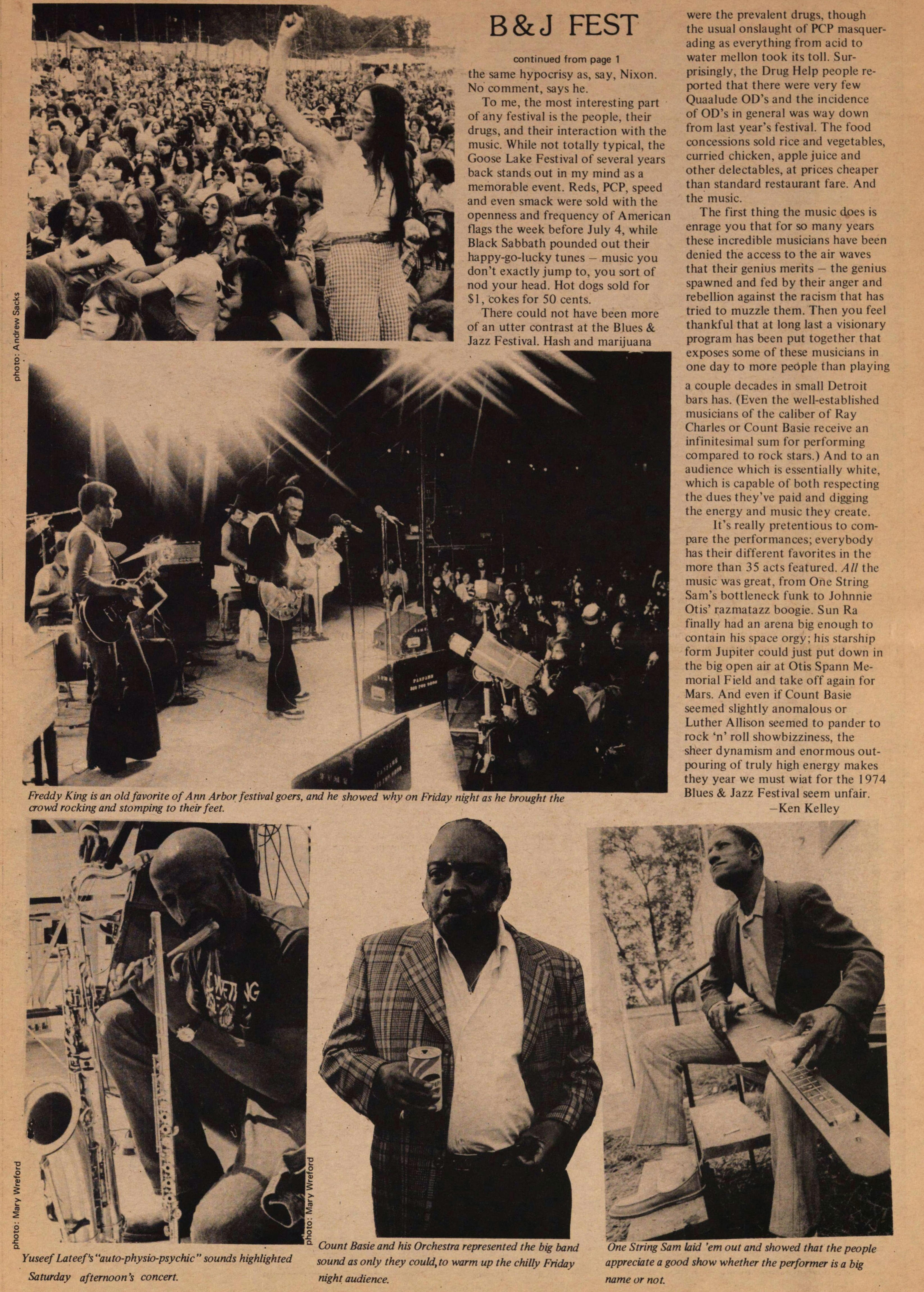 Image versus reality is the universal problem, especially when the magic media is around to embellish image. "Magic" because with a simple turn of a crucial adjective, "media" can bend an event to fit the author's image which, when translated into print, becomes the reality of the unwitting spectator, the reader.

Take the Michigan Daily's coverage of the 1973 Ann Arbor Blues & Jazz Festival. "20,000 Turn Out for 'Disappointing' Festival" proclaimed the headline. Huh? Having jüst spent one of the most enjoyable, treat-filled weekends of my life watching and listening to some of the most exciting yet generally ignored musicians in the world perform in one of the most mellow festival atmospheres in years, I was mystified for several seconds upon digesting that there label. But then the mystery became that the Daily had even bothered to grace the Festival with its presence. Ho hum, first week of school, no term papers to write, why not? Ummmm, who's this "Hound Dog Taylor" fellow, anyway, or this Revolutionary Ensemble business. Look, Paul Butterfield's not even here, or Dave Brubeck- how can you have a Blues and Jazz Festival without them? How very disappointing.

Then again there's the business of Sir Walter Krasny, who for lo these many moons has been the human cardfile of stupid ideas in his capacity as Ann Arbor Chief of Police - read Politicians. "The Medium Is the Message" is the '60's contribution to the fact that all cliches are based on truth. And when Walt proclaimed high and low the message that there was to be a supersquad of killer narks prowling the Festival, ready to swoop down and nab all the dopesmoking scofflaws, many a potential festival goer was probably persuaded to stay home and get high and listen to the music on the radio, since it was being broadcast over 100 National Public Radio stations around the country. Ha ha, smirked Walt after it was all over, we couldn't have sent our men in there without them getting ripped to pieces, anyway, so we just sort of hung out on the outskirts with our narks and arrested a heepee or two. (In fact, I talked to one young man who was ODing on PCP when two Ann Arbor cops searched him and found some opium and a lid of marijuana. They confiscated the dope, escorted him to the Drug Help tent, and left him, unbusted. Hope they got off.)

Then there were the five Young Idiots Pilferers, the so-called Yppies, who blew into town a day before the Festival, fresh from gorging themselves in the Big Rock Candy Mountain. What! sputtered their righteously outraged non-leader. You mean people have to pay over $5 per day just to watch this elitist pop-star show? We'll show these Rainbow Ripoff Capitalist dogs you can't fuck with the people. We'll organize to burn the fences, rush the gates, kill the Psychedelic Rangers, Eat the Rich, Chew the State, Blah the Blah. Well, they were told by several members of Rainbow Multi-Media, the festival organizers, the musicians have to make some bread, see, especially since most of them usually have a real hard time getting gigs. Then, again, you know, we're paying all the construction and stage crews, the Rangers, the Drug Helpers, the sound crew, the parking lot attendants, all of whom really need some bread, too, and you know we lost $4,000 last year and we're likely to lose three times that much this year, so it's not like this is Bill Graham or something. So give us your names and the names of your friends and we'll give you passes and you can get in free. Harrumph, said the Yippies, but we'll do it. Once inside, they proceeded to stroll about the grounds alternately calling for the aforementioned burning of the fences and selling, yes, selling, their YIPPIE buttons for $1 apiece. Hey, man, isn't that just a trifle jive, I ask their non-leader. Sort of like, continued on page 9,

B&J FEST, continued from page 1, the same hypocrisy as, say, Nixon. No comment, says he. To me, the most interesting part of any festival is the people, their drugs, and their interaction with the music. While not totally typical, the Goose Lake Festival of several years back stands out in my mind as a memorable event. Reds, PCP, speed and even smack were sold with the openness and frequency of American flags the week before July 4, while Black Sabbath pounded out their happy-go-lucky tunes - music you don't exactly jump to, you sort of nod your head. Hot dogs sold for $1 , cokes for 50 cents.

There could not have been more of an utter contrast at the Blues & Jazz Festival. Hash and marijuana were the prevalent drugs, though the usual onslaught of PCP masquerading as everything from acid to water mellon took its toll. Surprisingly, the Drug Help people reported that there were very few Quaalude OD's and the incidence of OD's in general was way down from last year's festival. The food concessions sold rice and vegetables, curried chicken, apple juice and other delectables, at prices cheaper than standard restaurant fare. And the music.

The first thing the music does is enrage you that for so many years these incredible musicians have been denied the access to the air waves that their genius merits - the genius spawned and fed by their anger and rebellion against the racism that has tried to muzzle them. Then you feel thankful that at long last a visionary program has been put together that exposes some of these musicians in one day to more people than playing a couple decades in small Detroit bars has. (Even the well-established musicians of the caliber of Ray Charles or Count Basie receive an infinitesimal sum for performing compared to rock stars.) And to an audience which is essentially white, which is capable of both respecting the dues they've paid and digging the energy and music they create.

It's really pretentious to compare the performances; everybody has their different favorites in the more than 35 acts featured. All the music was great, from One String Sam's bottleneck funk to Johnnie Otis' razmatazz boogie. Sun Ra finally had an arena big enough to contain his space orgy; his starship form Jupiter could just put down in the big open air at Otis Spann Memorial Field and take off again for Mars. And even if Count Basie seemed slightly anomalous or Luther Allison seemed to pander to rock 'n' roll showbizziness, the sheer dynamism and enormous outpouring of truly high energy makes they year we must wait for the 1974 Blues & Jazz Festival seem unfair.