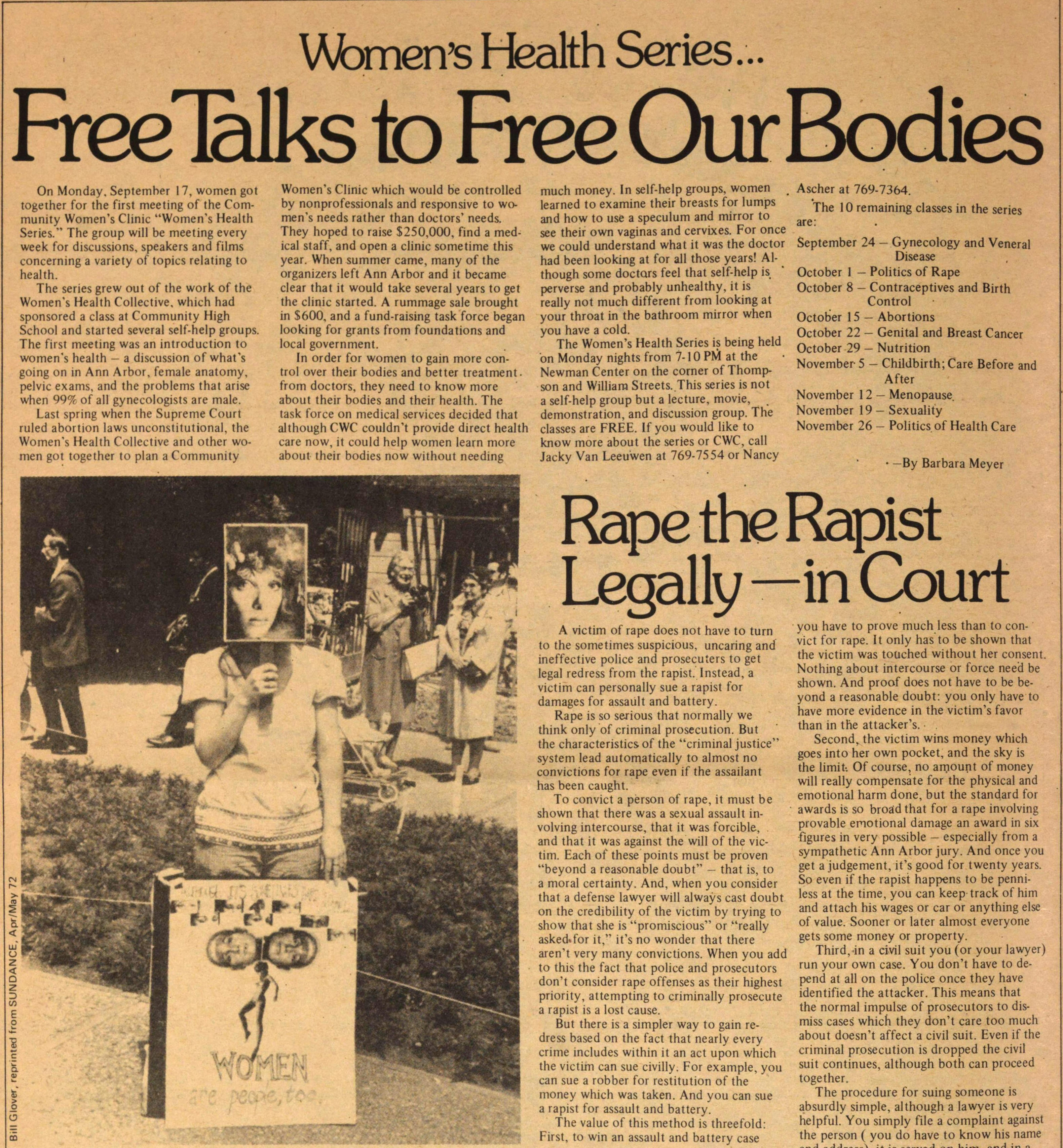 On Monday. September 17, women got together for the first meeting of the Community Women's Clinic "Women's Health Series." The group will be meeting every week for discussions, speakers, and films concerning a variety of topics relating to health.

The series grew out of the work of the Women's Health Collective. which had sponsored a class at Community High School and started several self-help groups. The first meeting was an introduction to women's health - a discussion of what's going on in Ann Arbor, female anatomy, pelvic exams, and the problems that arise when 99% of all gynecologists are male.

Last spring when the Supreme Court ruled abortion laws unconstitutional, the Women's Health Collective and other women got together to plan a Community Women's Clinic which would be controlled by nonprofessionals and responsive to women's needs rather than doctors' needs. They hoped to raise $250,000, find a medical staff, and open a clinic sometime this year. When summer came, many of the organizers left Ann Arbor and it became clear that it would take several years to get the clinic started. A rummage sale brought in $600, and a fund-raising task force began looking for grants from foundations and local government.

In order for women to gain more control over their bodies and better treatment. from doctors, they need to know more about their bodies and their health. The task force on medical services decided that although CWC couldn't provide direct health care now, it could help women learn more about their bodies now without needing much money. In self-help groups, women learned to examine their breasts for lumps and how to use a speculum and mirror to see their own vaginas and cervixes. For once we could understand what it was the doctor had been looking at for all those years! Although some doctors feel that self-help is perverse and probably unhealthy, it is really not much different from looking at your throat in the bathroom mirror when you have a cold.

The Women's Health Series is being held on Monday nights from 7-10 PM at the Newman Center on the corner of Thompson and William Streets. This series is not a self-help group but a lecture, movie, demonstration, and discussion group. The classes are FREE. If you would like to know more about the series or CWC, cali Jacky Van Leeuwen at 769-7554 or Nancy Ascher at 769-7364.

The 10 remaining classes in the series are:

November 5 - Childbirth; Care Before and After