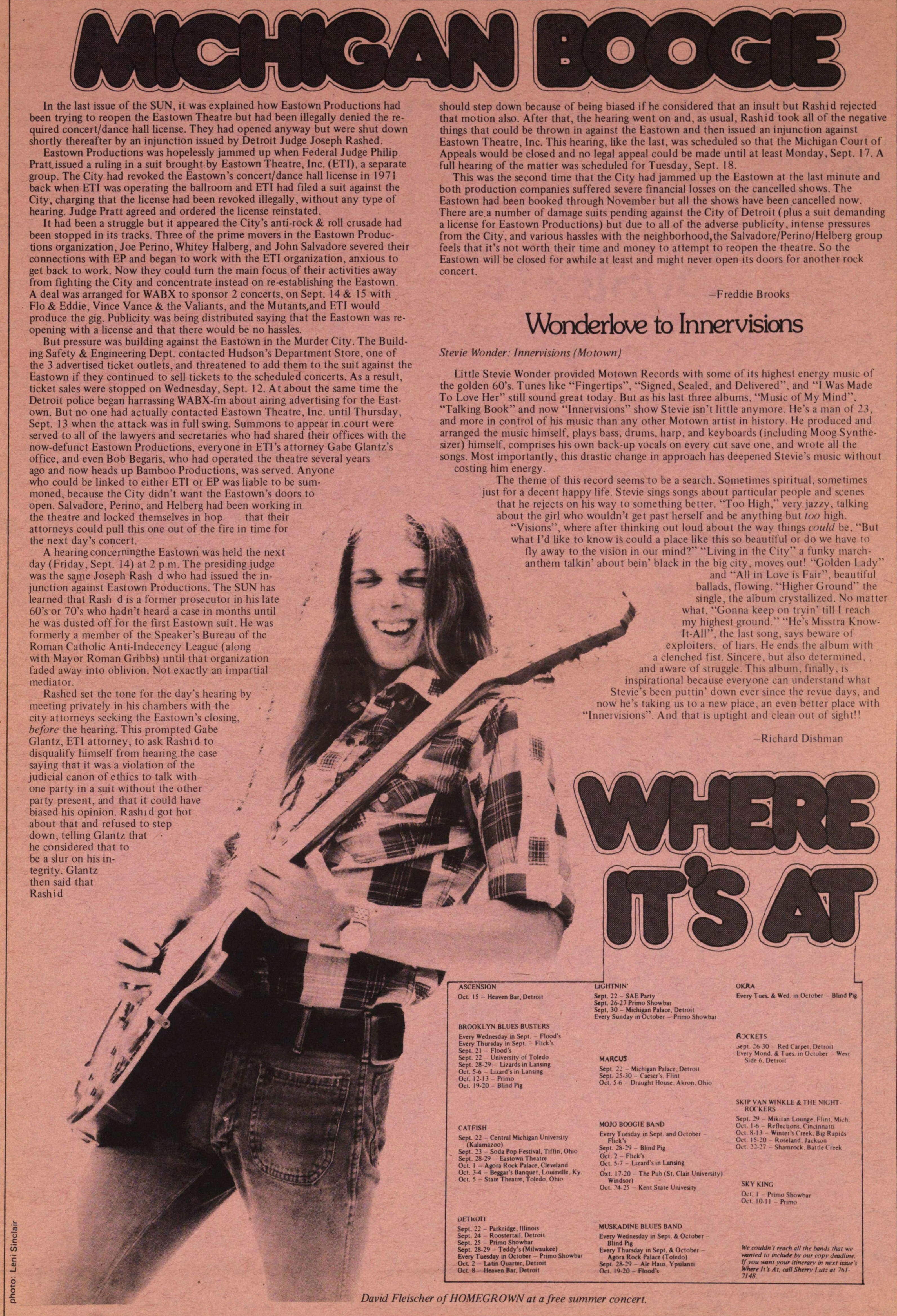 In the last issue of the SUN, it was explained how Eastown Productions had been trying to reopen the Eastown Theatre but had been illegally denied the required concert/dance hall license. They had opened anyway but were shut down shortly thereafter by an injunction issued by Detroit Judge Joseph Rashed.

Eastown Productions was hopelessly jammed up when Federal Judge Philip Pratt, issued a ruling in a suit brought by Eastown Theatre, Inc. (ETI), a separate group. The City had revoked the Eastown 's concert/dance hall license in 1971 back when ETI was operating the ballroom and ETI had filed a suit against the City, charging that the license had been revoked illegally, without any type of hearing. Judge Pratt agreed and ordered the license reinstated.

It had been a struggle but it appeared the City's anti-rock & roll crusade had been stopped in its tracks. Three of the prime movers in the Eastown Productions organization, Joe Perino, Whitey Halberg, and John Salvadore severed their connections with EP and began to work with the ETI organization, anxious to get back to work. Now they could turn the main focus of their activities away from fighting the City and concentrate instead on re-establishing the Eastown. A deal was arranged for WABX to sponsor 2 concerts, on Sept. 14 & 15 with Flo & Eddie, Vince Vanee & the Valiants, and the Mutants, and ETI would produce the gig. Publicity was being distributed saying that the Eastown was reopening with a license and that there would be no hassles.

But pressure was building against the Eastown in the Murder City. The Building Safety & Engineering Dept. contacted Hudson's Department Store, one of the 3 advertised ticket outlets, and threatened to add them to the suit against the Eastown if they continued to sell tickets to the scheduled concerts. As a result, ticket sales were stopped on Wednesday, Sept. 12. At about the same time the Detroit police began harassing WABX-fm about airing advertising for the Eastown. But no one had actually contacted Eastown Theatre, Inc. until Thursday, Sept. 13 when the attack was in full swing. Summons to appear in court were served to all of the lawyers and secretaries who had shared their offices with the now-defunct Eastown Productions, everyone in ETI's attorney Gabe Glantz's office, and even Bob Begaris. who had operated the theatre several years ago and now heads up Bamboo Productions, was served. Anyone who could be linked to either ETI or EP was liable to be summoned because the City didn't want the Eastown's doors to open. Salvadore, Perino, and Helberg had been working in the theatre and locked themselves in hopes that their attorneys could pull this one out of the fire in time for the next day's concert.

A hearing concerning the Eastown was held the next day (Friday.Sept. 14) at 2 p.m. The presiding judge was the same Joseph Rashed who had issued the junction against Eastown Productions. The SUN has learned that Rashed is a former prosecutor in his late 60's or 70's who hadn't heard a case in months until he was dusted off for the first Eastown suit. He was formerly a member of the Speaker's Bureau of the Roman Catholic Anti-Indecency League (along with Mayor Roman Gribbs) until that organization faded away into oblivion. Not exactly an impartial mediator.

Rashed set the tone tor the day's hearing by meeting privately in his chambers with the city attorneys seeking the Eastown's closing before the hearing. This prompted Gabe Glantz,z ETI attorney to ask Rashid to disqualify himself from hearing the case saying that it was a violation of the judicial canon of ethics to talk with one party in a suit without the other party present and that it could have biased his opinion. Rashid got hot about that and refused to step down, telling Glantz that he considered that to be a slur on his integrity. Glantz then said that Rashid should step down because of being biased if he considered that an insult but Rashid rejected that motion also. After that, the hearing went on and, as usual, Rashid took all of the negative things that could be thrown in against the Eastown and then issued an injunction against Eastown Theatre, Inc. This hearing, like the last, was scheduled so that the Michigan Court of Appeals would be closed and no legal appeal could be made until at least Monday, Sept. 17. A full hearing of the matter was scheduled for Tuesday, Sept. 18.

This was the second time that the City had jammed up the Eastown at the last minute and both production companies suffered severe financial losses on the cancelled shows. The Eastown had been booked through November but all the shows have been cancelled now. There are. a number of damage suits pending against the City of Detroit (plus a suit demanding a license for Eastown Productions) but due to all of the adverse publicity, intense pressures from the City, and various hassles with the neighborhood, the Salvadore Perino Helberg group feels that it's not worth their time and money to attempt to reopen the theatre. So the Eastown will be closed for a while at least and might never open its doors for another rock concert.