"tuition Hike Has Got To Go" 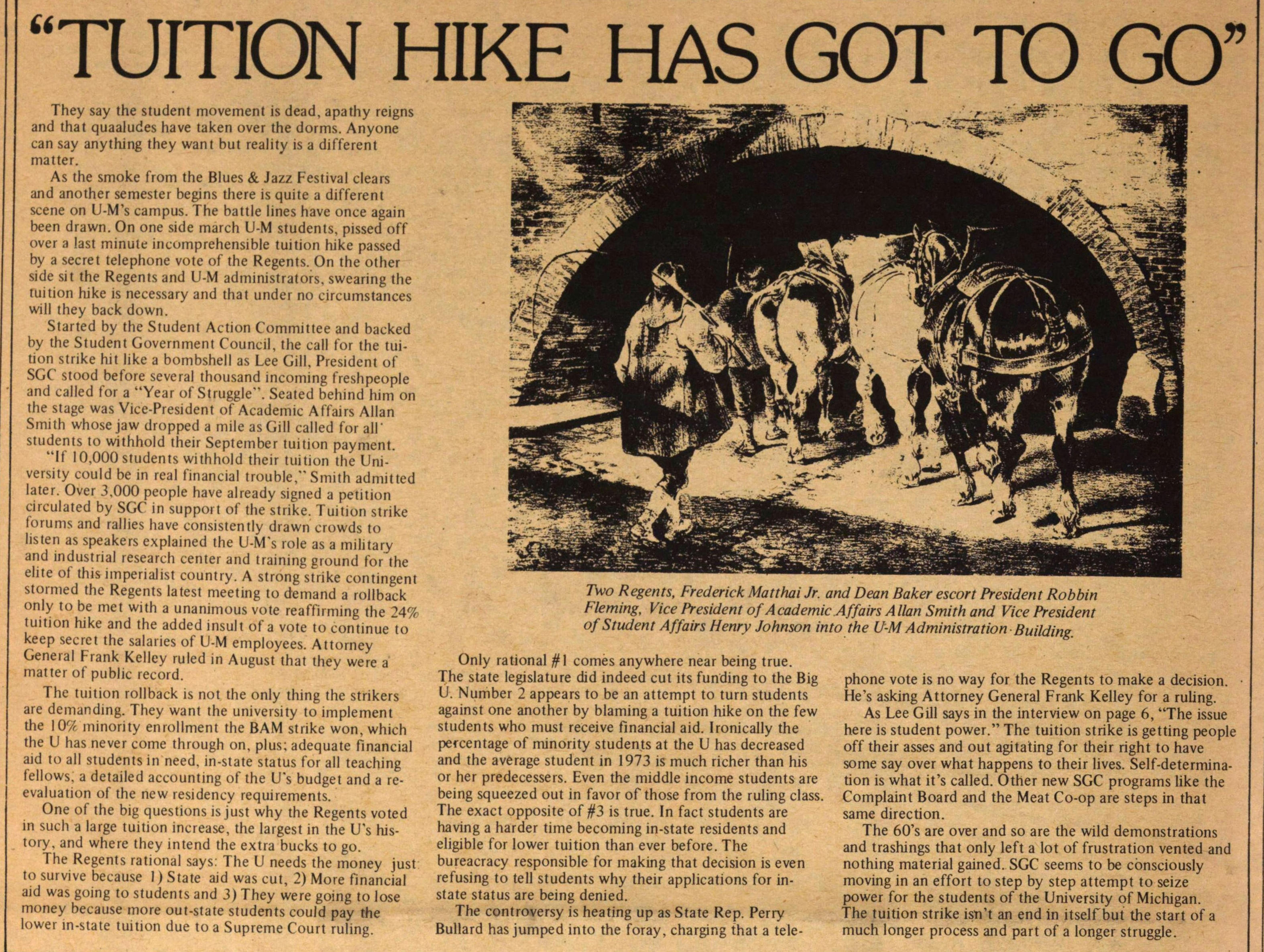 I hey say trie student movement ís dead, apathy reigns and that quaaludes have taken over the dorms. Anyone can say anything they want hut reality is a different matter. As the smoke from the Blues & Jazz Festival clears and another semester begins there is quite a different scène on U-M's campus. The battle lines have once again been drawn. On one side march U-M students, pissed off over a last minute incomprehensible tuition hike passed by a secret telephone vote of the Regents. On the other side sit the Regents and U-M administrators. swearing the Cüition hike is necessary and that under no circumstances wil! they back down. Started by the Student Action Committee and backed by the Student Government Council, the cali for the tuition strike hit like a bombshell as Lee Gil!. President of SGC stood before several thousand incoming freshpeople and called for a "Year of Struggle". Seated behind him on the stage was Vice-President of Academie Affairs Alian Smith whosejawdroppeda mileasGill called for all' students to withhold their September tuition payment. "II 10,000 students withhold their tuition the University could be in real financial trouble," Smith admitted later. Over 3,000 people have already signed a petition dreulated by SGC in support of the strike. Tuition strike forums and rallies have consisten tly drawn crowds to listen as speakers explained the U-M's role as a military and industrial research center and training ground for the elite of this imperialist country. A strong strike contingent stormed the Regents la test meeting to demand a rollback only to be met with a unanimous vote reaffirming the 24% tuition hjke and the added insult of a vote to continue to keep secret the salaries of U-M employees. Attorney General Frank Kelley ruled in August that they were a matter of public record. The tuition rollback is not the only thing the strikers are demanding. They want the university to implement the 07r minority enrollment the BAM strike won, which the U has never come through on, plus; adequate financial aid to all students in need. in-state status for all teaching fellows. a detailed accounting of the U's budget and a reevaluation of the new residency requirements. One of the big questions is just why the Regents voted in such a large tuition increase, the largest in the U's history, and where they intend the extra bucks to go. The Regents rational says: The U needs the money just to survive because I ) State aid was cut, 2) More financial aid was going to students and 3) They were going to lose money because more out-state students could pay the lower in-state tuition due to a Supreme Court ruling. Only rational #1 comes anywhere near being true. The state legislature did indeed cut its funding to the Big U. Number 2 appears to be an attempt to turn students against one another by blaming a tuition hike on the few students who must receive financial aid. Ironically the percentage of minority students at the U has decreased and the average student in 1973 is much richer than his or her predecessers. Even the middle income students are being squeezed out in favor of those from the ruling class. The exact opposite of #3 is true. In fact students are having a harder time becoming in-state residents and eligible for lower tuition than ever before. The bureacracy responsible for making that decisión is even refusing to teil students why their applications for instate status are being denied. The controversy is heating up as State Rep. Perry Bullard has jumped into the foray, charging that a phone vote is no way for the Regents to make a decisión. He's asking Attorney General Frank Kelley for a ruling. As Lee Gilí says in the interview on page 6, "The issue here is student power." The tuition strike is getting people off their asses and out agitating for their right to have some say over what happens to their lives. Self-determination is what it's called. Other new SGC programs like the Complaint Board and the Meat Co-op are steps in that same direction. The 60's are over and so are the wild demonstrations and trashings that only left a lot of frustration vented and nothing material gained. SGC seems to be cönsciously moving in an effort to step by step attempt to seize power for the students of the University of Michigan. The tuition strike isti't an end in itself but the start of a much longer process and part of a longer struggle.