A Touch Of Peking Right In A2 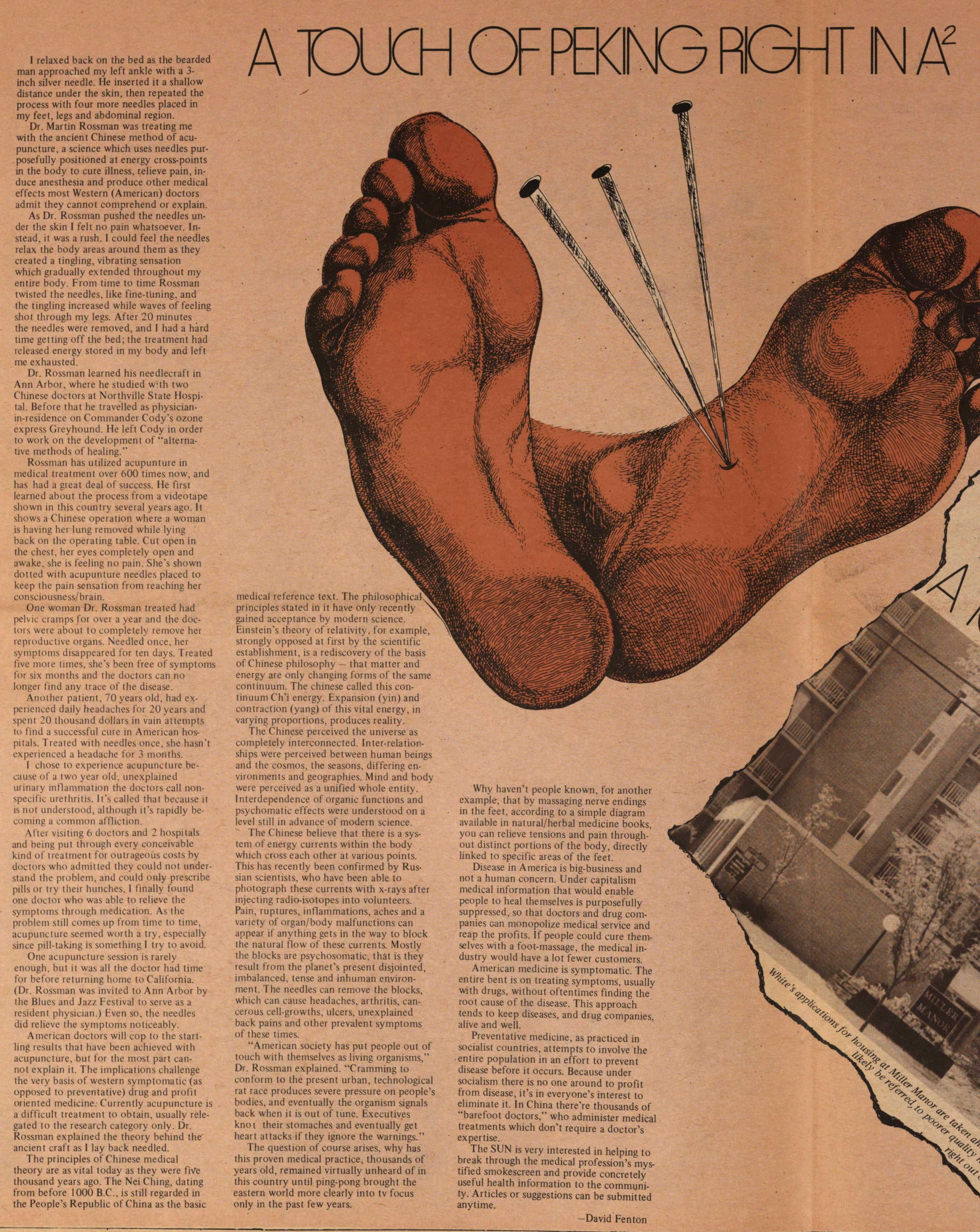 I relaxed back on the bed as the bearded man approached my left ankle with a 3-inch silver needle. He inserted it a shallow distance under the skin, then repeated the process with four more needies placed in my feet, legs, and abdominal region.

Dr. Martin Rossman was treating me with the ancient Chinese method of acupuncture, a science which uses needles purposefully positioned at energy cross-points in the body to cure illness, relieve pain, induce anesthesia and produce other medical effects most Western (American) doctors admit they cannot comprehend or explain. As Dr. Rossman pushed the needles under the skin I felt no pain whatsoever. Instead, it was a rush. I could feel the needles relax the body areas around them as they created a tingling, vibrating sensation which gradually extended throughout my entire body. From time to time Rossman twisted the needles, like fine-tuning, and the tingling increased while waves of feeling shot through my legs. After 20 minutes the needles were removed, and I had a hard time getting off the bed; the treatment had released energy stored in my body and left me exhausted.

Dr. Rossman learned his needlecraft in Ann Arbor, where he studied with two Chinese doctors at Northville State Hospital. Before that he traveled as physician-in-residence on Commander Cody's ozone express Greyhound. He left Cody in order to work on the development of "alternative methods of healing."

Rossman has utilized acupuncture in medical treatment over 600 times now and has had a great deal of success. He first [earned about the process from a videotape shown in this country several years ago. It shows a Chinese operation where a woman is having her lung removed while lying back on the operating table. Cut open in the chest. her eyes completely open and awake, she is feeling no pain. She's shown dotted with acupuncture needles placed to keep the pain sensation from reaching her consciousness brain.

One woman Dr. Rossman treated had pelvic cramps for over a year and the doctors were about to completely remove her reproductive organs. Needled once, her symptoms disappeared for ten days. Treated five more times, she's been free of symptoms for six months and the doctors can no longer find any trace of the disease.

Another patient. 70 years old, had experienced daily headaches for 20 years and spent 20 thousand dollars in vain attempts to find a successful cure in American hospitals. Treated with needles once, she hasn't experienced a headache for 3 months.

I chose to experience acupuncture because of a two-year-old, unexplained urinary inflammation the doctors call nonspecific urethritis. It's called that because it is not understood, although it's rapidly becoming a common affliction.

After visiting 6 doctors and 2 hospitals and being put through every conceivable kind of treatment for outrageous costs by doctors who admitted they could not understand the problem and could only prescribe pills or try their hunches. I finally found one doctor who was able to relieve the symptoms through medication. As the problem still comes up from time to time, acupuncture seemed worth a try, especially since pill-taking is somethlng I try to avoid.

One acupuncture session is rarely enough, but it was all the doctor had time for before returning home to California. (Dr. Rossman was invited to Ann Arbor by the Blues and Ja Festival to serve as a resident physician.) Even so, the needles did relieve the symptoms noticeably.

American doctors will cop to the startling results that have been achieved with acupuncture, but for the most part, cannot explain it. The implications challenge the very basis of western symptomatic (as opposed to preventative) drug and profit-oriented medicine. Currently, acupuncture is a difficult treatment to obtain, usually relegated to the research category only. Dr. Rossman explained the theory behind the ancient craft as I lay back needled.

The principles of Chinese medical theory are as vital today as they were five thousand years ago. The Nei Ching, dating from before 1000 B.C., is still regarded in the People's Republic of China as the basic medical reference text. The philosophical principles stated in it have only recently gained acceptance by modern science. Einstein's theory of relativity, for example, strongly opposed at first by the scientific establishment, is a rediscovery of the basis of Chinese philosophy - that matter and energy are only changing forms of the same continuum. The Chinese called this continuum Ch'i energy. Expansion (yin) and contraction (yang) of this vital energy, in varying proportions, produces reality.

The Chinese perceived the universe as completely interconnected. Inter-relationships were perceived between human beings and the cosmos, the seasons, differing environments and geographies. Mind and body were perceived as a unified whole entity. Interdependence of organic functions and psychomatic effects were understood on a level still in advance of modern science.

The Chinese believe that there is a system of energy currents within the body which cross each other at various points. This has recently been confirmed by Russian scientists, who have been able to photograph these currents with x-rays after injecting radio-isotopes into volunteers. Pain, ruptures, inflammations, aches, and a variety of organ body malfunctions can appear if anything gets in the way to block the natural flow of these currents. Mostly the blocks are psychomatic, that is the result from the planet's present disjointed, imbalanced, tense, and inhuman environment. The needles can remove the blocks, which can cause headaches, arthritis, cancerous cell-growths, ulcers, unexplained back pains and other prevalent symptoms of these times.

"American society has put people out of touch with themselves as living organisms," Dr. Rossman explained. "Cramming to conform to the present urban, technological rat race produces severe pressure on people's bodies, and eventually the organism signals back when it is out of tune. Executives knot their stomachs and eventually get heart attacks if they ignore the warnings."

The question of course arises, why has this proven medical practice, thousands of years old, remained virtually unheard of in this country until ping-pong brought the eastern world more clearly into tv focus only in the past few years.

Why haven't people known, for another example, that by massaging nerve endings in the feet, according to a simple diagram available in natural herbal medicine books, you can relieve tensions and pain out distinct portions of the body, directly linked to specific areas of the feet?

Disease in America is big business and not a human concern. Under capitalism, medical information that would enable people to heal themselves is purposefully suppressed, so that doctors and drug companies can monopolize medical service and reap the profits. If people could cure themselves with a foot-massage, the medical industry would have a lot fewer customers.

American medicine is symptomatic. The entire bent is on treating symptoms, usually with drugs, without oftentimes finding the root cause of the disease. This approach tends to keep diseases, and drug companies, alive and well. Preventative medicine, as practiced in socialist countries, attempts to involve the entire population in an effort to prevent disease before it occurs. Because under socialism there is no one around to profit from disease, it's in everyone's interest to elimínate it. In China, there are thousands of "barefoot doctors," who administer medical treatments which don't require a doctor's expertise. The SUN is very interested in helping to break through the medical profession's mystified smokescreen and provide concretely useful health information to the community. Articles or suggestions can be submitted anytime.