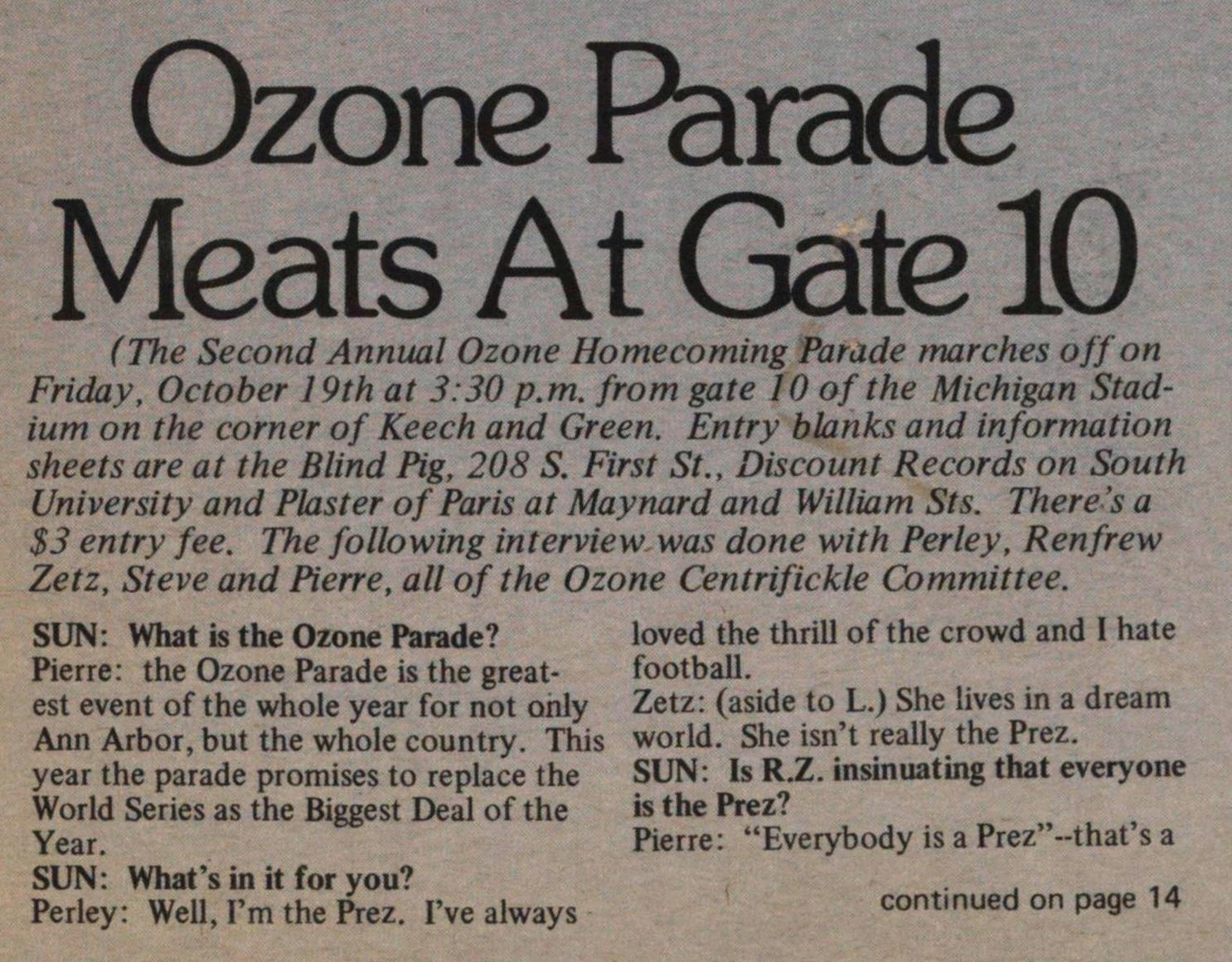 (The Second Annual Ozone Homecoming Parade marches off on Friday, October 19th at 3:30 p.m. front gate 10 of the Michigan Stadium on the corner of Keech and Green. Entry blanks and information sheets are at the Blind Pig, 208 S. First St., Discount Records on South University and Plaster of Paris at Maynard and William Sts. There's a $3 entry fee. The following interview was done with Perley, Renfrew Zetz, Steve and Pierre, all of the Ozone Centrifickle Committee.

SUN: What is the Ozone Parade?

Pierre: the Ozone Parade is the greatest event of the whole year for not only Ann Arbor, but the whole country. This year the parade promises to replace the World Series as the Biggest Deal of the Year.

Perley: Well, I'm the Prez. I've always loved the thrill of the crowd and I hate football.

Zetz: (aside to L.) She lives in a dream world. She isn't really the Prez.

SUN: Is R.Z. insinuating that everyone is the Prez?

Pierre: "Everybody is a Prez"-that's a

Zetz: Well. there's prizes: 1st prize is a $25 gift certificate to the Meat Palace or Applerose; 2nd prize is a Genoa salami and a free tour of the Stroh's Brewery in Detroit; 3rd prize is a year's subscription to Hog Farm Management Magazine plus pig's feet for two at Metzgers'.

Pierre: There will be a Marching Band only if the People can get behind it. People with high school or college (or any kind of...) marching band experience are desperately needed!

SUN: How can these people contact you about the band?

Pierre: My number is 663-0729. There will be a Surprise Reward for anyone whose information and/or talent can lead to the temporary arresting of a Marching Band at gate 10.

SUN: Who is this year's Homecoming Queen?

The Prez: Naturally we tried to get last year's and everyone's favorite Queen Pat Oleszko back. but she is touring about Nova Scotia and winging to North Carolina as well. So we spun the barrel of governmental forms and pulled out these two ....monarchy and democracy. We worked them into the following Monarchial Formula: ANYONE CAN BE IF APPROPRIATELY DRESSED, King or Queen for a Day. Just come down to the parade grounds by 2:30 and report to the Ozone Float as one of the Kings or Queens. Dress extraordinaire.

SUN: Where and when is the Ozone Parade taking place?

Prez: October 19. Floats should line up at Gate 10 of Michigan Stadium at the corner of Keech and Green, at 2:30 in the afternoon. For lining up and marching good, this year we've even got an Orderer of Spacing and his own personal squad.

SUN: Who's invited to participate in the parade (other than marching-banders), and how do they enter?

Prez: There's a $3 entry fee. Official entry blanks and info sheets are at the Blind Pig (208 S. First St.), Discount Records on South University St., and Plaster of Paris at Maynard and William. We sincerely invite the Mayor and all the city council members to build floats, play in the band, whatever.

Steve: In fact, Jerry DeGrieck, a member of that Weighty Body, will be one of the Jerry Judges.

Pierre: Along with Gerri Bond and Old Grey (her car).

Zetz: And other Jerrys too humorous to mention.

SUN: What's the theme of the parade?

Zetz: Those Philistines! They all think Art is dead! Art is not dead! It will live forever!

Steve: Yes! This Parade could be interpreted as a Rabelaisian celebration, at which the wine of life is guzzled with the enthusiasm with which one quaffs the delightful liquids of the brothers Gallo!

Prez: And it's cheaper.

SUN: What events are being planned for people who want to participate, but not necessarily initiate?

Prez: Well, is anyone out there in Reader Land interested in the Battle of the Herbivores versus the Carnivores? Or the boxing match between white and whole wheat bread, and the amazing Army of Marching Meatheads?

SUN: Besides bread and Art, what other celebrities will be at the Parade?

Steve: The Boogie-Woogie Piggity will be there, and a Life-Sized 45.

Pierre: That's a record in itself!

SUN: You're not discouraging Eggplants this year?

Steve: We'll eat our words about them!

Pierre: In addition, we pledge there will be no rip-offs and no profits!

Prez: (intensely serious) And no debts. Last year, our meagerly-lined pockets were relieved of mucho bucks.

Prez: Well, us here. I'd like to now reveal the major financial assistants of last year's Parade. ..The Sugar Daddies and Moms of the First Annual Ozone Homecoming Parade...

Prez: ...those Floundering Fathers of the Ozone, Commander Cody and His Lost Planet Airmen (and Family). This year they'll be distributing the Ozone version to Homecoming in North Carolina, but his brother. Captain Cody, will be here.

SUN: What about the Ozone float itself?

Zetz: It will be a Protest Float concerning the McDonalds Consciousness.

Prez: Seriously, the destruction of a beautiful house (on Maynard St., next to the Arcade Post Office) for the sake of a McDonalds is a serious reflection on the now-defunct Apathetic Movement.

SUN: So, to wrap-up the Parade Experience you'd say...?

Pierre: An opportunity to drop the burden of responsibility for your Act and become one with...

Steve: Truth, Beauty and the American Way, or all of the above. Words fail me... I fail words...

Prez: That's a perfect example of the kind of paralysis that can be overcome by Parade Participation!

Pierre: Right! And remember, no cause is too obscure!

Steve: Remember, our Motto is: "Everybody loves a parade and this parade loves everybody right back!" Any man, woman, child, animal, mineral, vegetable or meatball who's interested should come!