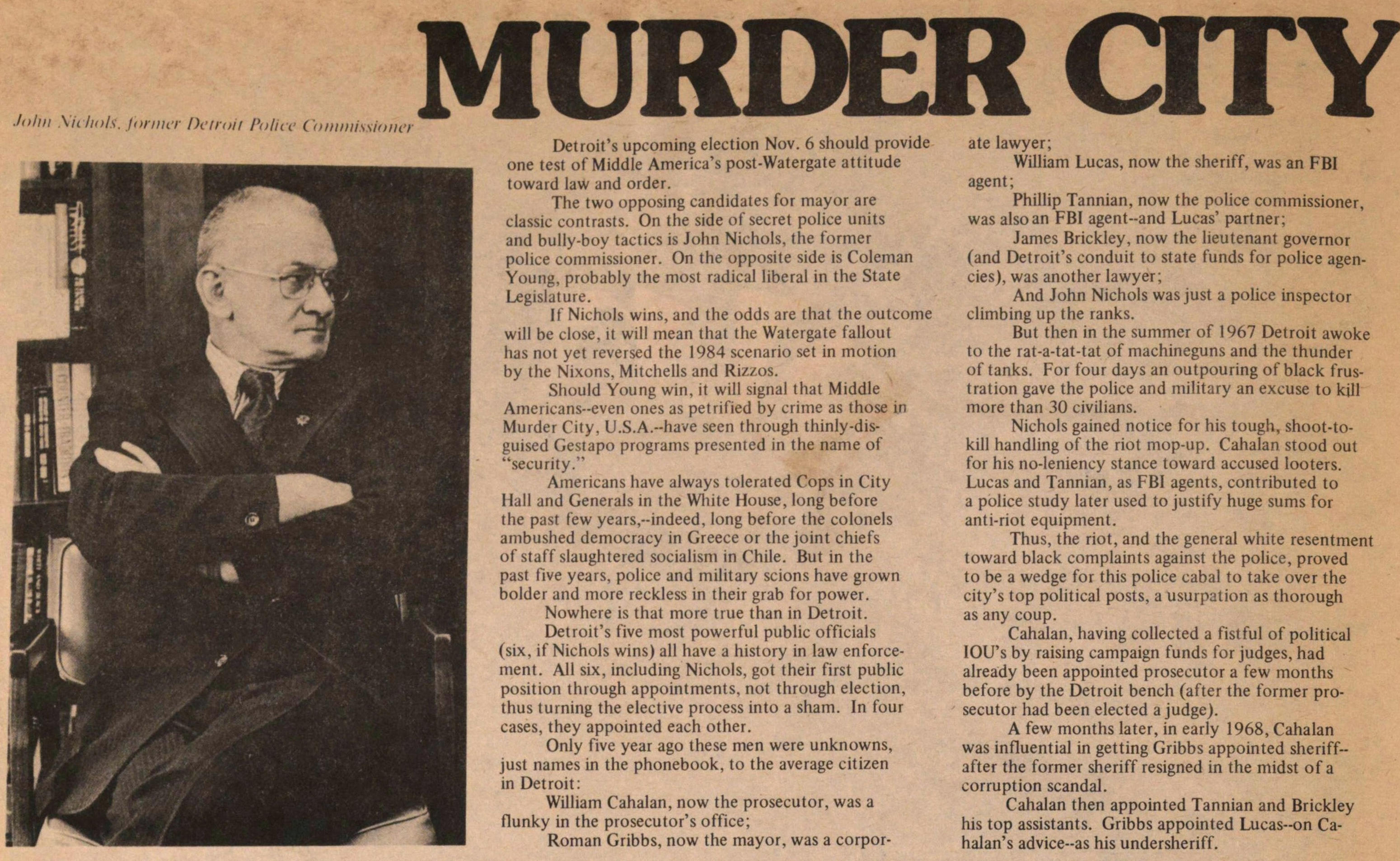 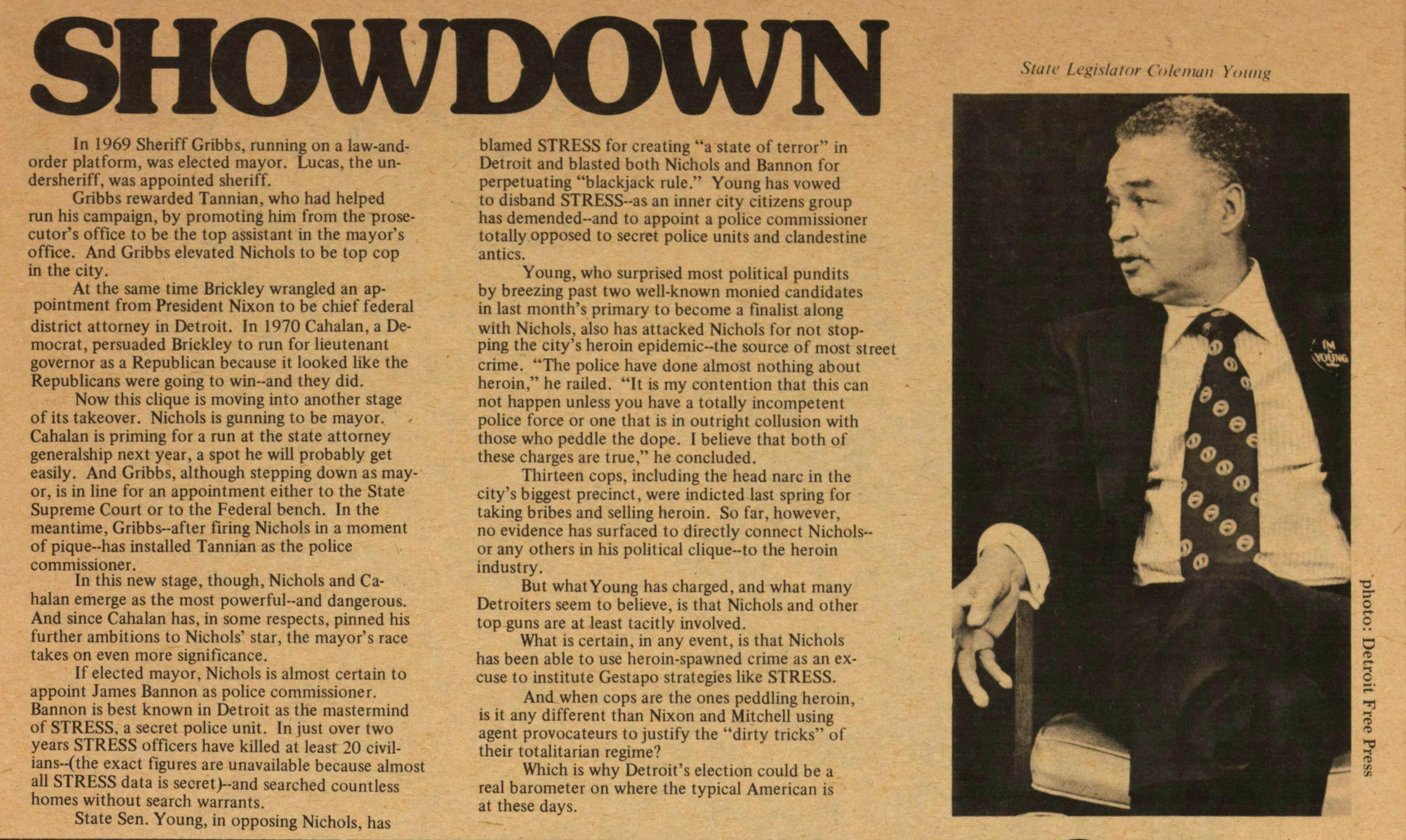 The two opposing candidates for mayor are classic contrasts. On the side of secret police units and bully-boy tactics is John Nichols, the former police commissioner. On the opposite side is Coleman Young, probably the most radical liberal in the State Legislature.

If Nichols wins, and the odds are that the outcome will be close, it will mean that the Watergate fallout has not yet reversed the 1984 scenario set in motion by the Nixons, Mitchells and Rizzos.

Should Young win, it will signal that Middle Americans--even ones as petrified by crime as those in Murder City, U.S. A. --have seen through thinly-disguised Gestapo programs presented in the name of "security."

Americans have always tolerated Cops in City Hall and Generals in the White House, long before the past few years,--indeed, long before the colonels ambushed democracy in Greece or the joint chiefs of staff slaughtered socialism in Chile. But in the past five years, police and military scions have grown bolder and more reckless in their grab for power.

Nowhere is that more true than in Detroit.

Detroit's five most powerful public officials (six, if Nichols wins) all have a history in law enforcement. All six, including Nichols, got their first public position through appointments, not through election, thus turning the elective process into a sham. In four cases, they appointed each other.

Only five year ago these men were unknowns, just names in the phonebook, to the average citizen in Detroit:

Roman Gribbs, now the mayor, was a corporate lawyer;

William Lucas, now the sheriff, was an FBI agent;

James Brickley, now the lieutenant governor (and Detroit's conduit to state funds for police agencies), was another lawyer;

And John Nichols was just a police inspector climbing up the ranks.

But then in the summer of 1967 Detroit awoke to the rat-a-tat-tat of machine guns and the thunder of tanks. For four days an outpouring of black frustration gave the police and military an excuse to kill more than 30 civilians.

Nichols gained notice for his tough, shoot-to-kill handling of the riot mop-up. Cahalan stood out for his no-leniency stance toward accused looters. Lucas and Tannian, as FBI agents, contributed to a police study later used to justify huge sums for anti-riot equipment.

Thus, the riot, and the general white resentment toward black complaints against the police, proved to be a wedge for this police cabal to take over the city's top political posts, a usurpation as thorough as any coup.

Cahalan, having collected a fistful of political IOU's by raising campaign funds for judges, had already been appointed prosecutor a few months before by the Detroit bench (after the former prosecutor had been elected a judge).

A few months later, in early 1968, Cahalan was influential in getting Gribbs appointed sheriff after the former sheriff resigned in the midst of a corruption scandal.

In 1969 Sheriff Gribbs, running on a law-and-order platform, was elected mayor. Lucas, the undersheriff, was appointed sheriff.

Gribbs rewarded Tannian, who had helped run his campaign, by promoting him from the prosecutor's office to be the top assistant in the mayor's office. And Gribbs elevated Nichols to be top cop in the city.

At the same time Brickley wrangled an appointment from President Nixon to be chief federal district attorney in Detroit. In 1970 Cahalan, a Democrat, persuaded Brickley to run for lieutenant governor as a Republican because it looked like the Republicans were going to win-and they did.

Now this clique is moving into another stage of its takeover. Nichols is gunning to be mayor. Cahalan is priming for a run at the state attorney generalship next year, a spot he will probably get easily. And Gribbs, although stepping down as mayor, is in line for an appointment either to the State Supreme Court or to the Federal bench. In the meantime, Gribbs-after firing Nichols in a moment of pique--has installed Tannian as the pólice commissioner.

In this new stage, though, Nichols and Cahalan emerge as the most powerful-and dangerous. And since Cahalan has, in some respects, pinned his further ambitions to Nichols' star, the mayor's race takes on even more significance.

If elected mayor, Nichols is almost certain to appoint James Bannon as police commissioner. Bannon is best known in Detroit as the mastermind of STRESS, a secret police unit. In just over two years STRESS officers have killed at least 20 civilians--(the exact figures are unavailable because almost all STRESS data is secret-and searched countless homes without search warrants.

State Sen. Young, in opposing Nichols, has blamed STRESS for creating "a state of terror" in Detroit and blasted both Nichols and Bannon for perpetuating "blackjack rule." Young has vowed to disband STRESS--as an inner city citizens group has demanded--and to appoint a police commissioner totally opposed to secret police units and clandestine antics.

Young, who surprised most political pundits by breezing past two well-known monied candidates in last month's primary to become a finalist along with Nichols, also has attacked Nichols for not stopping the city's heroin epidemic-the source of most street crime. "The police have done almost nothing about heroin," he railed. "It is my contention that this can not happen unless you have a totally incompetent police force or one that is in outright collusion with those who peddle the dope. I believe that both of these charges are true," he concluded.

Thirteen cops, including the head narc in the city's biggest precinct, were indicted last spring for taking bribes and selling heroin. So far, however, no evidence has surfaced to directly connect Nichols or any others in his political clique-to the heroin industry.

But what Young has charged, and what many Detroiters seem to believe, is that Nichols and other top guns are at least tacitly involved.

What is certain, in any event, is that Nichols has been able to use heroin-spawned crime as an excuse to institute Gestapo strategies like STRESS.

And when cops are the ones peddling heroin, is it any different than Nixon and Mitchell using agent provocateurs to justify the "dirty tricks" of their totalitarian regime?

Which is why Detroit's election could be a real barometer on where the typical American is at these days.