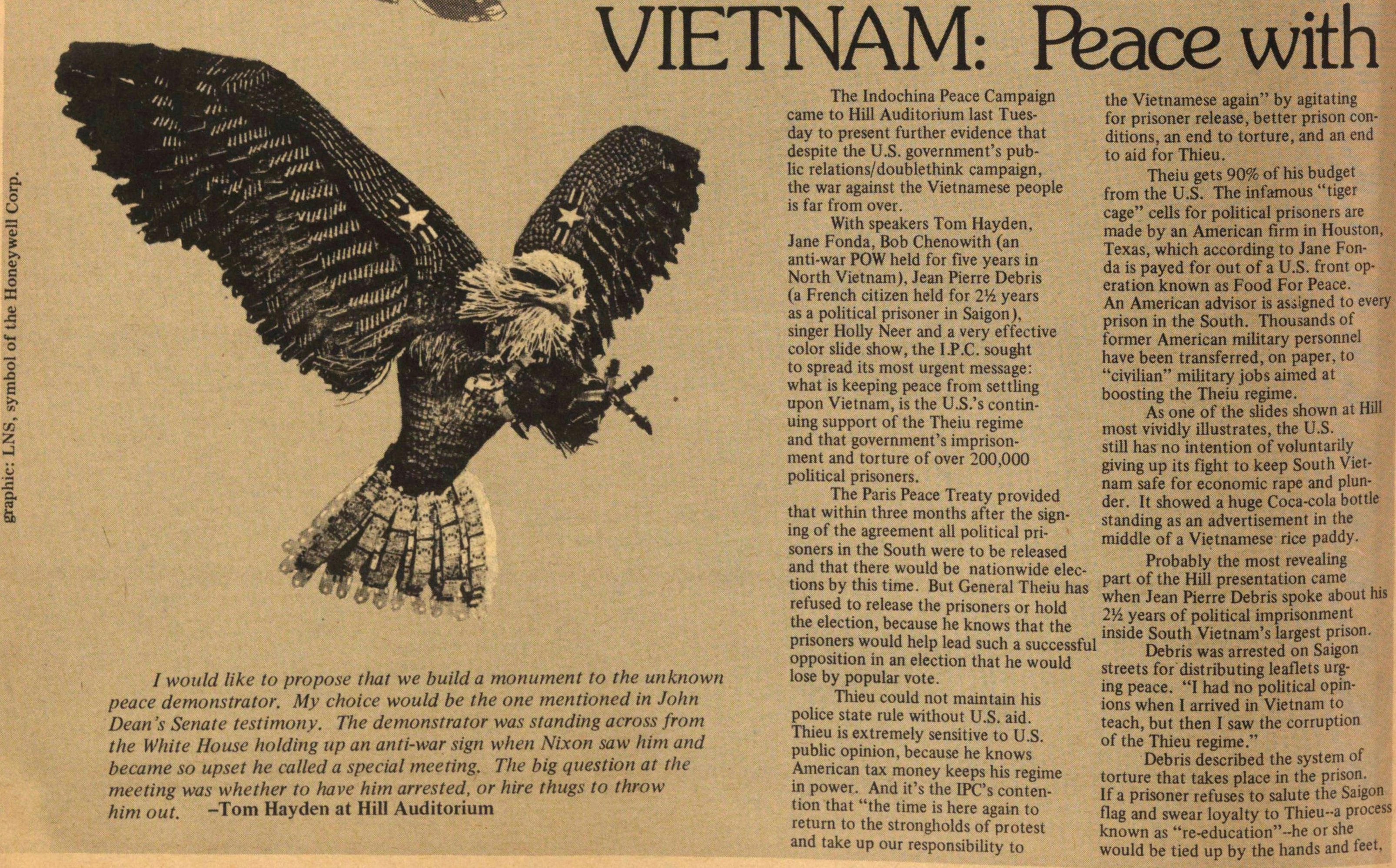 I would like to propose that we build a monument to the unknown peace demonstrator. My choice would be the one mentioned in John Dean’s Senate testimony. The demonstrator was standing across from the White House holding up an anti-war sign when Nixon saw him and became so upset he called a special meeting. The big question at the meeting was whether to have him arrested, or hire thugs to throw him out. – Tom Hayden at Hill Auditorium

The Indochina Peace Campaign came to Hill Auditorium last Tuesday to present further evidence that despite the U.S. government’s public relations/doublethink campaign, the war against the Vietnamese people is far from over.

With speakers Torn Hayden, Jane Fonda, Bob Chenowith (an anti-war POW held for five years in North Vietnam), Jean Pierre Debris (a French citizen held for 2 ½ years as a political prisoner in Saigon), singer Holly Neer and a very effective color slide show, the I.P.C sought to spread its most urgent message: what is keeping peace from settling upon Vietnam, is the U.S.’s continuing support of the Theiu regime and that government’s imprisonment and torture of over 200,000 political prisoners.

The Paris Peace Treaty provided that within three months after the signing of the agreement all political prisoners in the South were to be released and that there would be nationwide elections by this time. But General Theiu has refused to release the prisoners or hold the election, because he knows that the prisoners would help lead such a successful opposition in an election that he would lose by popular vote.

Thieu could not maintain his police state rule without U.S. aid. Thieu is extremely sensitive to U.S. public opinion, because he knows American tax money keeps his regime in power. And it’s the IPC’s contention that “the time is here again to return to the strongholds of protest and take up our responsibility to the Vietnamese again” by agitating for prisoner release, better prison conditions, an end to torture, and an end to aid for Thieu.

Theiu gets 90% of his budget from the U.S. The infamous “tiger cage” cells for political prisoners are made by an American firm in Houston, Texas, which according to Jane Fonda is payed for out of a U.S. front operation known as Food For Peace. An American advisor is assigned to every prison in the South. Thousands of former American military personnel have been transferred, on paper, to “civilian” military jobs aimed at boosting the Theiu regime.

As one of the slides shown at Hill most vividly illustrates, the U.S. still has no intention of voluntarily giving up its fight to keep South Vietnam safe for economic rape and plunder. It showed a huge Coca-Cola bottle standing as an advertisement in the middle of a Vietnamese rice paddy.

Probably the most revealing part of the Hill presentation came when Jean Pierre Debris spoke about his 2½ years of political imprisonment inside South Vietnam’s largest prison.

Debris was arrested on Saigon streets for distributing leaflets urging peace. “I had no political opinions when I arrived in Vietnam to teach, but then I saw the corruption of the Thieu regime.”

Debris described the system of torture that takes place in the prison. If a prisoner refuses to salute the Saigon flag and swear loyalty to Thieu – a process known as “re-education” – he or she would be tied up by the hands and feet, held by the hair back against a plank while guards would force feed them soapy water and then motor oil through the mouth until the victim fainted. Then the guards would force the prisoner to vomit the contents of his stomach through the nose. The political prisoners would either be chained upright in tiger cages or sent to the “movie room”, so designated because whenever Red Cross officials came to inspect the premises the room would be cleared for movie showings. Other times, 300-400 prisoners would be chained by the hands and feet in rows so that they couldn’t lie on the ground. People remained chained this way for months and years at a time.

When prisoners would protest by shouting slogans for more food or medical care, the guards would shoot American -made tear gas into the cells and have street criminals and murderers gang up to beat the political prisoners unconscious. The point of the torture is to break the patriotic spirit of the prisoners, the spirit which Thieu and the U.S. know is the greatest single threat to their planned conquest of the culture and commerce of South Vietnam.

Jean Debris said that “the keys to the prisons in South Vietnam are in this country.” He described how demonstrations in the U.S. were always known about both to the jailers and the prisoners during his incarceration. How when he was able to smuggle letters out describing the tortures and have them printed in