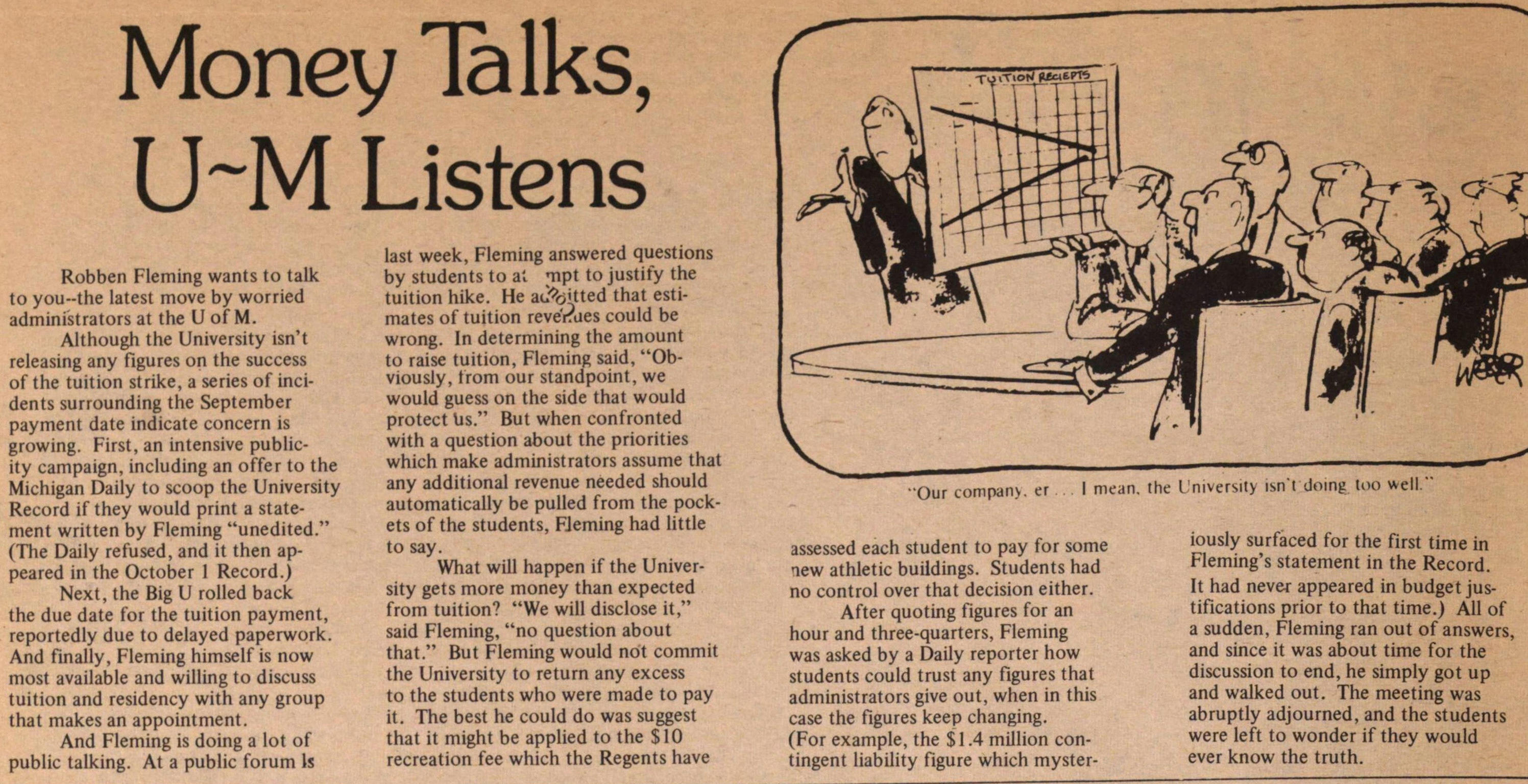 Robben Fleming wants to talk to you – the latest move by worried administrators at the U of M.

Although the University isn’t releasing any figures on the success of the tuition strike, a series of incidents surrounding the September payment date indicate concern is growing. First, an intensive publicity campaign, including an offer to the Michigan Daily to scoop the University Record if they would print a statement written by Fleming “unedited.” (The Daily refused, and it then appeared in the October 1 Record.)

Next, the Big U rolled back the due date for the tuition payment, reportedly due to delayed paperwork. And finally, Fleming himself is now most available and willing to discuss tuition and residency with any group that makes an appointment.

And Fleming is doing a lot of public talking. At a public forum last week, Fleming answered questions by students to attempt to justify the tuition hike. He admitted that estimates of tuition revenues could be wrong. In determining the amount to raise tuition, Fleming said, “Obviously, from our standpoint, we would guess on the side that would protect us.” But when confronted with a question about the priorities which make administrators assume that any additional revenue needed should automatically be pulled from the pockets of the students, Fleming had little to say.

What will happen if the University gets more money than expected from tuition? “We will disclose it,” said Fleming, “no question about that.” But Fleming would not commit the University to return any excess to the students who were made to pay it. The best he could do was suggest that it might be applied to the $10 recreation fee which the Regents have assessed each student to pay for some new athletic buildings. Students had no control over that decision either.

After quoting figures for an hour and three-quarters, Fleming was asked by a Daily reporter how students could trust any figures that administrators give out, when in this case the figures keep changing. (For example, the $1.4 million contingent liability figure which mysteriously surfaced for the first time in Fleming’s statement in the Record. It had never appeared in budget justifications prior to that time.) All of a sudden, Fleming ran out of answers, and since it was about time for the discussion to end, he simply got up and walked out. The meeting was abruptly adjourned, and the students were left to wonder if they would ever know the truth.