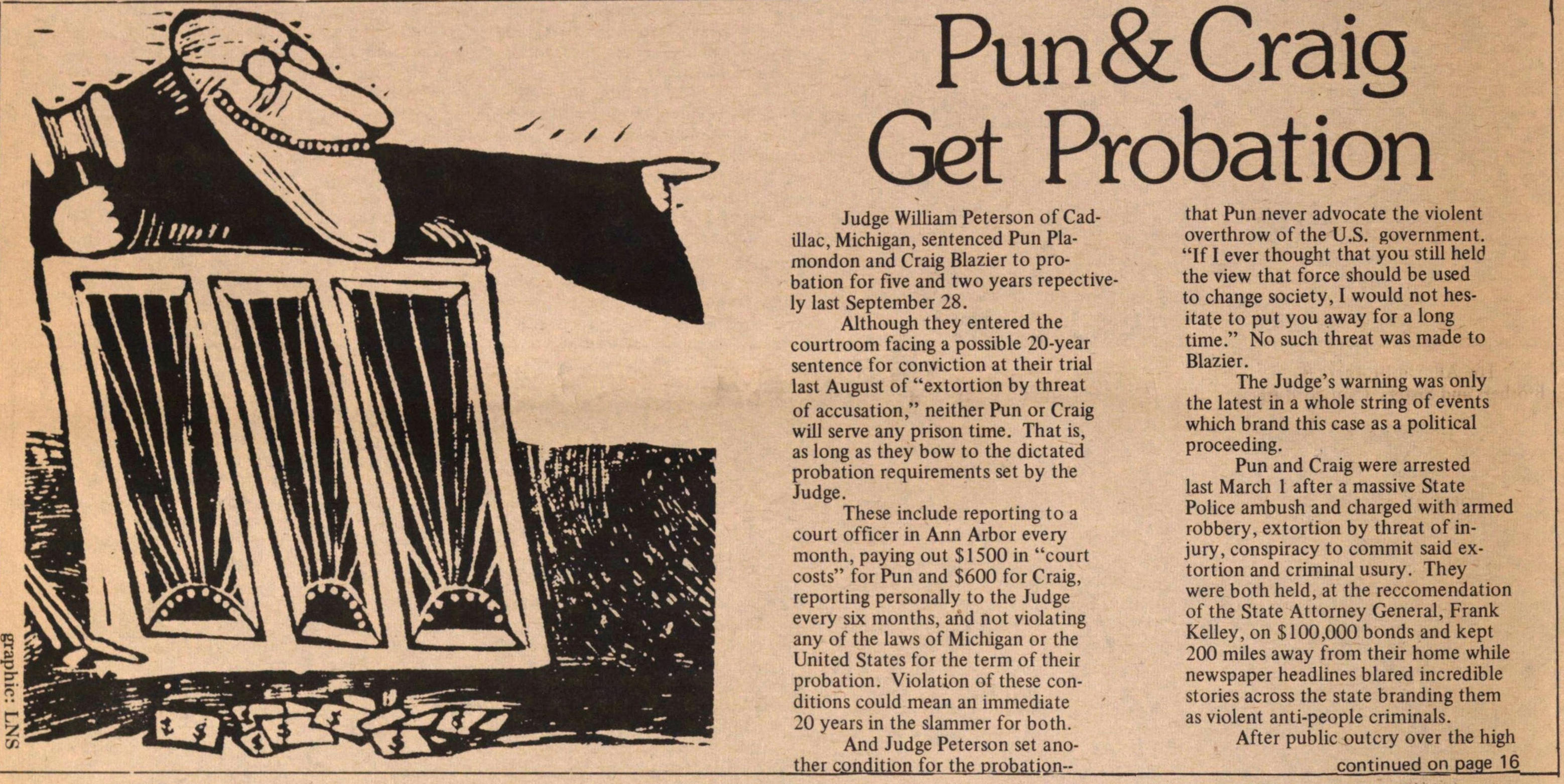 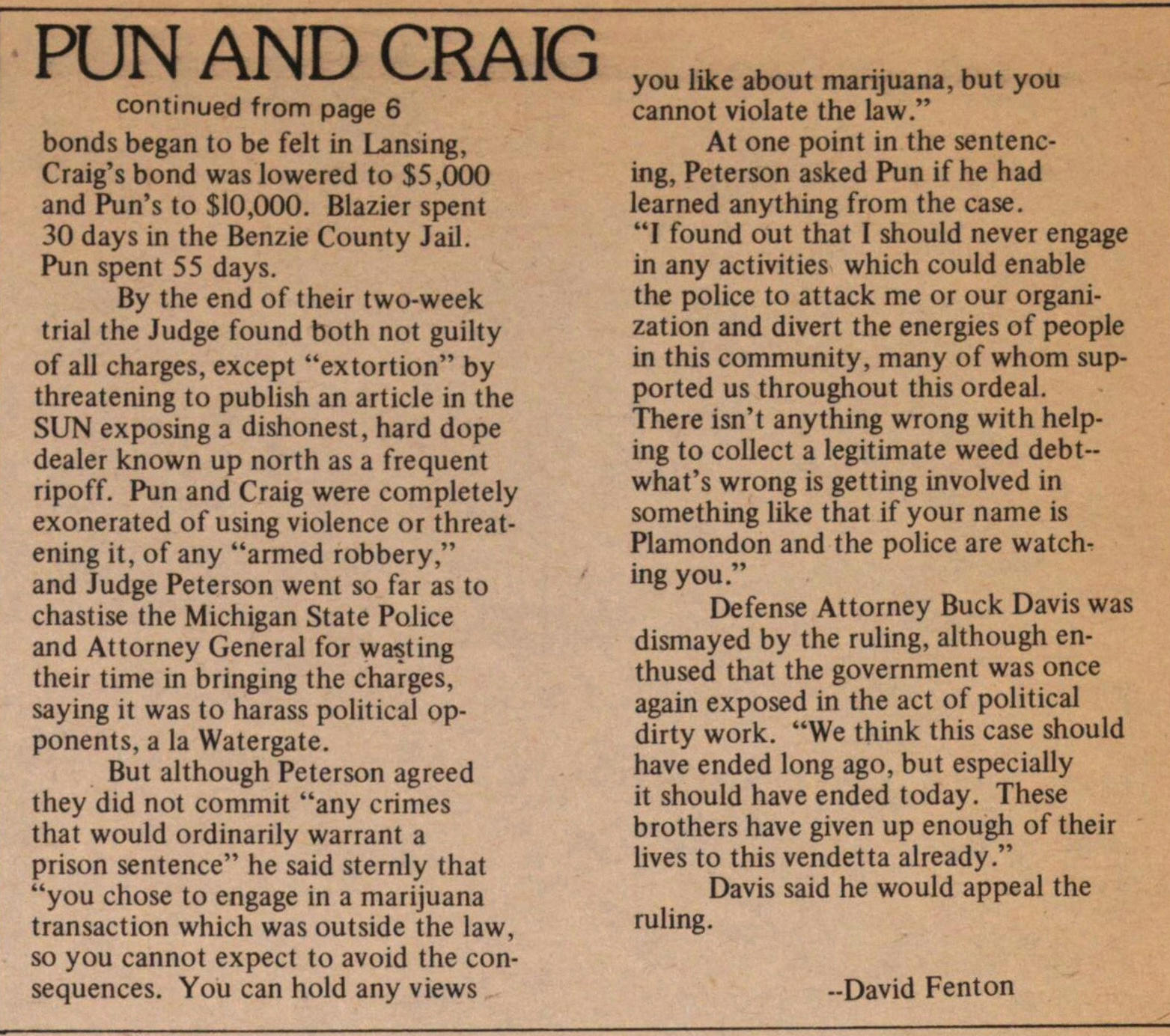 Although they entered the courtroom facing a possible 20-year sentence for conviction at their trial last August of “extortion by threat of accusation,” neither Pun or Craig will serve any prison time. That is, as long as they bow to the dictated probation requirements set by the Judge.

These include reporting to a court officer in Ann Arbor every month, paying out $1500 in “court costs” for Pun and $600 for Craig, reporting personally to the Judge every six months, and not violating any of the laws of Michigan or the United States for the term of their probation. Violation of these conditions could mean an immediate 20 years in the slammer for both.

And Judge Peterson set another condition for the probation – that Pun never advocate the violent overthrow of the U.S. government. “If I ever thought that you still held the view that force should be used to change society, I would not hesitate to put you away for a long time.” No such threat was made to Blazier.

The Judge’s warning was only the latest in a whole string of events which brand this case as a political proceeding.

Pun and Craig were arrested last March 1 after a massive State Police ambush and charged with armed robbery, extortion by threat of injury, conspiracy to commit said extortion and criminal usury. They were both held, at the recommendation of the State Attorney General, Frank Kelley, on $100,000 bonds and kept 200 miles away from their home while newspaper headlines blared incredible stories across the state branding them as violent anti-people criminals. After public outcry over the high bonds began to be felt in Lansing, Craig’s bond was lowered to $5,000 and Pun’s to $10,000. Blazier spent 30 days in the Benzie County Jail. Pun spent 55 days.

By the end of their two-week trial the Judge found both not guilty of all charges, except “extortion” by threatening to publish an article in the SUN exposing a dishonest, hard dope dealer known up north as a frequent ripoff. Pun and Craig were completely exonerated of using violence or threatening it, of any “armed robbery,” and Judge Peterson went so far as to chastise the Michigan State Police and Attorney General for wasting their time in bringing the charges, saying it was to harass political opponents, a la Watergate.

But although Peterson agreed they did not commit “any crimes that would ordinarily warrant a prison sentence” he said sternly that “you chose to engage in a marijuana transaction which was outside the law, so you cannot expect to avoid the consequences. You can hold any views you like about marijuana, but you cannot violate the law.”

At one point in the sentencing, Peterson asked Pun if he had learned anything from the case. “I found out that I should never engage in any activities which could enable the police to attack me or our organization and divert the energies of people in this community, many of whom supported us throughout this ordeal. There isn’t anything wrong with helping to collect a legitimate weed debt – what’s wrong is getting involved in something like that if your name is Plamondon and the police are watching you.”

Defense Attorney Buck Davis was dismayed by the ruling, although enthused that the government was once again exposed in the act of political dirty work. “We think this case should have ended long ago, but especially it should have ended today. These brothers have given up enough of their lives to this vendetta already.”

Davis said he would appeal the ruling.