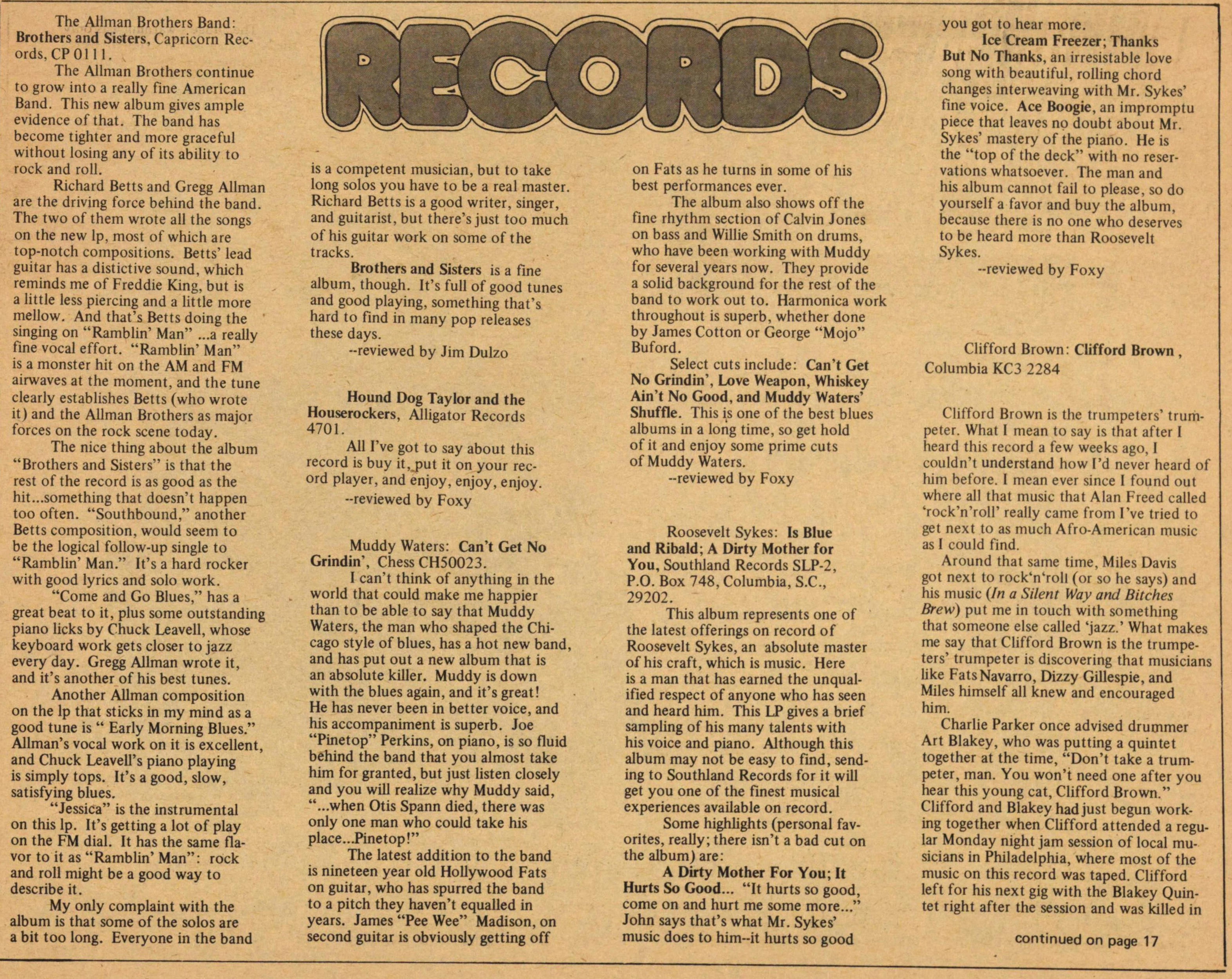 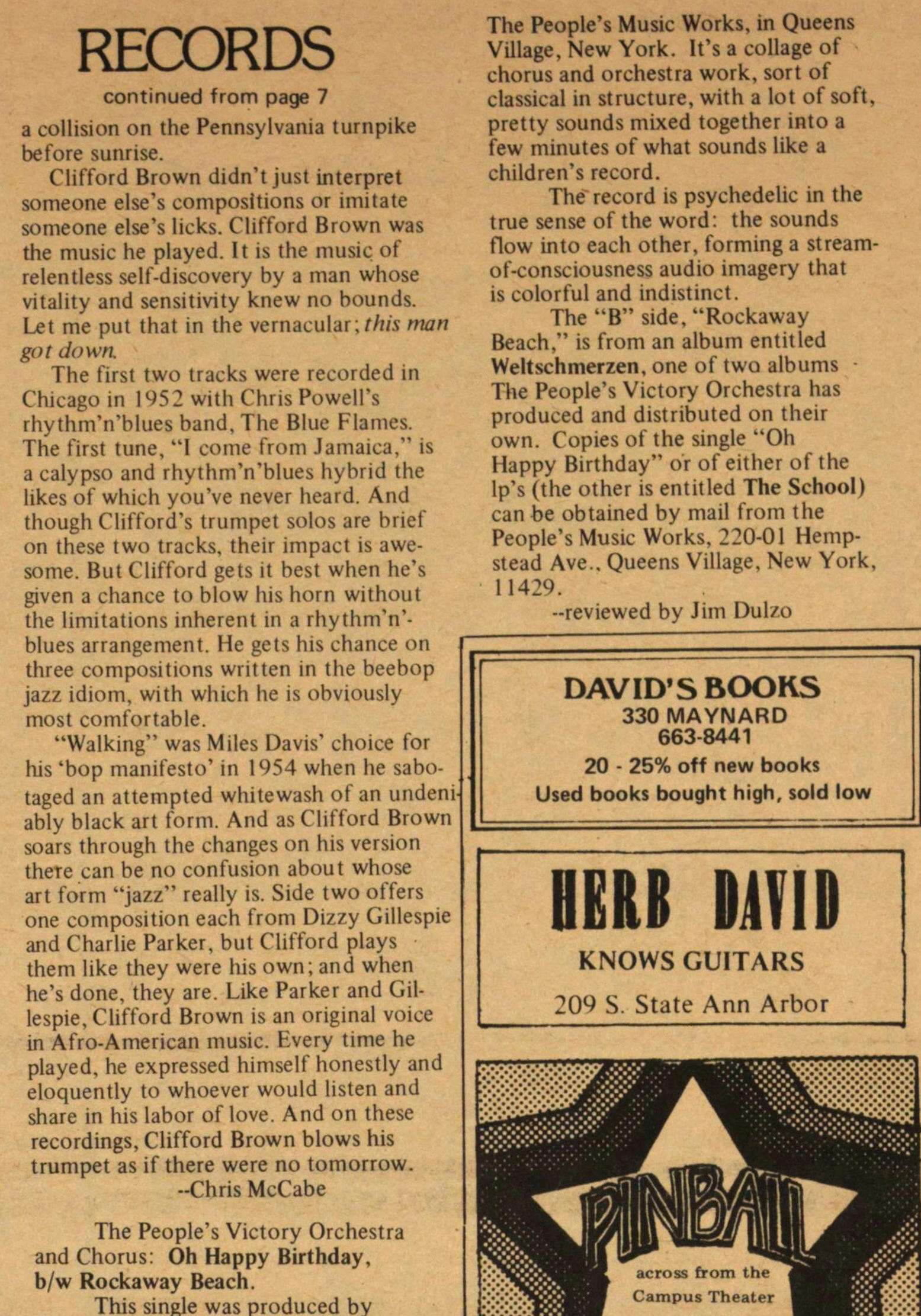 The Allman Brothers continue to grow into a really fine American Band. This new album gives ample evidence of that. The band has become tighter and more graceful without losing any of its ability to rock and roll.

Richard Betts and Gregg Allman are the driving force behind the band. The two of them wrote all the songs on the new lp, most of which are top-notch compositions. Betts' lead guitar has a distinctive sound, which reminds me of Freddie King, but is a little less piercing and a little more mellow. And that's Betts doing the singing on "Ramblin' Man"...a really fine vocal effort. "Ramblin' Man" is a monster hit on the AM and FM airwaves at the moment, and the tune clearly establishes Betts (who wrote it) and the Allman Brothers as major forces on the rock scène today.

The nice thing about the album "Brothers and Sisters" is that the rest of the record is as good as the hit...something that doesn't happen too often. "Southbound," another Betts composition, would seem to be the logical follow-up single to "Ramblin' Man." It's a hard rocker with good lyrics and solo work.

"Come and Go Blues," has a great beat to it, plus some outstanding piano licks by Chuck Leavell, whose keyboard work gets closer to jazz every day. Gregg Allman wrote it, and it's another of his best tunes.

Another Allman composition on the lp that sticks in my mind as a good tune is "Early Morning Blues." Allman's vocal work on it is excellent, and Chuck Leavell's piano playing is simply tops. It's a good, slow, satisfying blues.

"Jessica" is the instrumental on this lp. It's getting a lot of play on the FM dial. It has the same flavor to it as "Ramblin' Man": rock and roll might be a good way to describe it.

My only complaint with the album is that some of the solos are a bit too long. Everyone in the band is a competent musician, but to take long solos you have to be a real master. Richard Betts is a good writer, singer, and guitarist, but there's just too much of his guitar work on some of the tracks.

Brothers and Sisters is a fine album, though. It's full of good tunes and good playing, something that's hard to find in many pop releases these days.

All I've got to say about this record is buy it, put it on your record player, and enjoy, enjoy, enjoy.

I can't think of anything in the world that could make me happier than to be able to say that Muddy Waters, the man who shaped the Chicago style of blues, has a hot new band, and has put out a new album that is an absolute killer. Muddy is down with the blues again, and it's great! He has never been in better voice, and his accompaniment is superb. Joe "Pinetop" Perkins, on piano, is so fluid behind the band that you almost take him for granted, but just listen closely and you will realize why Muddy said, "...when Otis Spann died, there was only one man who could take his place...Pinetop!"

The latest addition to the band is nineteen year old Hollywood Fats on guitar, who has spurred the band to a pitch they haven't equaled in years. James "Pee Wee" Madison, on second guitar is obviously getting off on Fats as he turns in some of his best performances ever.

The album also shows off the fine rhythm section of Calvin Jones on bass and Willie Smith on drums, who have been working with Muddy for several years now. They provide a solid background for the rest of the band to work out to. Harmonica work throughout is superb, whether done by James Cotton or George "Mojo" Buford.

Select cuts include: Can't Get No Grindin', Love Weapon, Whiskey Ain't No Good, and Muddy Waters' Shuffle. This is one of the best blues albums in a long time, so get hold of it and enjoy some prime cuts of Muddy Waters.

This album represents one of the latest offerings on record of Roosevelt Sykes, an absolute master of his craft, which is music. Here is a man that has earned the unqualified respect of anyone who has seen and heard him. This LP gives a brief sampling of his many talents with his voice and piano. Although this album may not be easy to find, sending to Southland Records for it will get you one of the finest musical experiences available on record.

Some highlights (personal favorites, really; there isn't a bad cut on the album) are:

A Dirty Mother For You; It Hurts So Good... "It hurts so good, come on and hurt me some more..." John says that's what Mr. Sykes' music does to him--it hurts so good you got to hear more.

Ice Cream Freezer; Thanks But No Thanks, an irresistible love song with beautiful, rolling chord changes interweaving with Mr. Sykes' fine voice. Ace Boogie, an impromptu piece that leaves no doubt about Mr. Sykes' mastery of the piano. He is the "top of the deck" with no reservations whatsoever. The man and his album cannot fail to please, so do yourself a favor and buy the album, because there is no one who deserves to be heard more than Roosevelt Sykes.

Clifford Brown is the trumpeters' trumpeter. What I mean to say is that after I heard this record a few weeks ago, I couldn't understand how I'd never heard of him before. I mean ever since I found out where all that music that Alan Freed called 'rock'n'roll' really carne from I've tried to get next to as much Afro-American music as I could find.

Around that same time, Miles Davis got next to rock'n'roll (or so he says) and his music (In a Silent Way and Bitches Brew) put me in touch with something that someone else called 'jazz.' What makes me say that Clifford Brown is the trumpeters' trumpeter is discovering that musicians like Fats Navarro, Dizzy Gillespie, and Miles himself all knew and encouraged him.

Charlie Parker once advised drummer Art Blakey, who was putting a quintet together at the time, "Don't take a trumpeter, man. You won't need one after you hear this young cat, Clifford Brown." Clifford and Blakey had just begun working together when Clifford attended a regular Monday night jam session of local musicians in Philadelphia, where most of the music on this record was taped. Clifford left for his next gig with the Blakey Quintet right after the session and was killed in

a collision on the Pennsylvania turnpike before sunrise.

The first two tracks were recorded in Chicago in 1952 with Chris Powell's rhythm'n'blues band, The Blue Flames. The first tune, "I come from Jamaica," is a calypso and rhythm'n'blues hybrid the likes of which you've never heard. And though Clifford's trumpet solos are brief on these two tracks, their impact is awesome. But Clifford gets it best when he's given a chance to blow his horn without the limitations inherent in a rhythm'n'blues arrangement. He gets his chance on three compositions written in the beebop jazz idiom, with which he is obviously most comfortable.

"Walking" was Miles Davis' choice for his 'bop manifesto' in 1954 when he sabotaged an attempted whitewash of an undeniably black art form. And as Clifford Brown soars through the changes on his version there can be no confusion about whose art form "jazz" really is. Side two offers one composition each from Dizzy Gillespie and Charlie Parker, but Clifford plays them like they were his own; and when he's done, they are. Like Parker and Gillespie, Clifford Brown is an original voice in Afro-American music. Every time he played, he expressed himself honestly and eloquently to whoever would listen and share in his labor of love. And on these recordings, Clifford Brown blows his trumpet as if there were no tomorrow.

This single was produced by The People's Music Works, in Queens Village, New York. It's a collage of chorus and orchestra work, sort of classical in structure, with a lot of soft, pretty sounds mixed together into a few minutes of what sounds like a children's record.

The record is psychedelic in the true sense of the word: the sounds flow into each other, forming a stream-of-consciousness audio imagery that is colorful and indistinct.

The "B" side, "Rockaway Beach," is from an album entitled Weltschmerzen, one of two albums The People's Victory Orchestra has produced and distributed on their own. Copies of the single "Oh Happy Birthday" or of either of the lp's (the other is entitled The School) can be obtained by mail from the People's Music Works, 220-01 Hempstead Ave., Queens Village, New York, 11429.