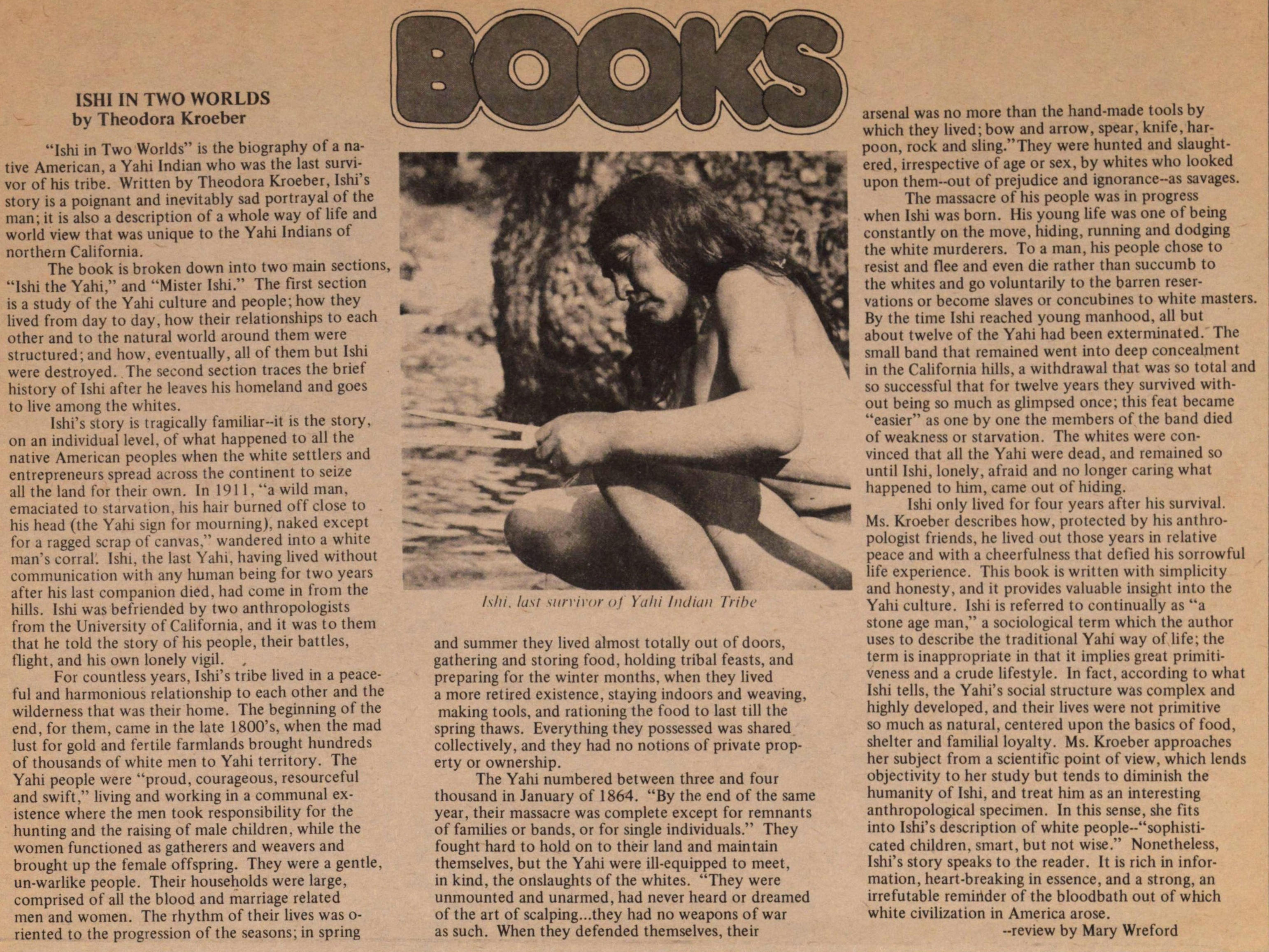 "Ishi in Two Worlds" is the biography of a native American, a Yahi Indian who was the last survivor of his tribe. Written by Theodora Kroeber, Ishi's story is a poignant and inevitably sad portrayal of the man; it is also a description of a whole way of life and world view that was unique to the Yahi Indians of northern California.

The book is broken down into two main sections, "Ishi the Yahi," and "Mister Ishi." The first section is a study of the Yahi culture and people; how they lived from day to day, how their relationships to each other and to the natural world around them were structured; and how, eventually, all of them but Ishi were destroyed. The second section traces the brief history of Ishi after he leaves his homeland and goes to live among the whites.

Ishi's story is tragically familiar--it is the story, on an individual level, of what happened to all the native American peoples when the white settlers and entrepreneurs spread across the continent to seize all the land for their own. In 1911, "a wild man, emaciated to starvation. his hair burned off close to . his head (the Yahi sign for mourning), naked except for a ragged scrap of canvas," wandered into a white man's corral. Ishi, the last Yahi, having lived without communication with any human being for two years after his last companion died. had come in from the hills. Ishi was befriended by two anthropologists from the University of California, and it was to them that he told the story of his people, their battles, flight, and hisown lonely vigil.

For countless years, Ishi's tribe lived in a peaceful and harmonious relationship to each other and the wilderness that was their home. The beginning of the end for them, came in the late 1800's, when the mad lust for gold and fertile farmlands brought hundreds of thousands of white men to Yahi territory. The Yahi people were "proud, courageous, resourceful and swift," living and working in a communal existence where the men took responsibility for the hunting and the raising of male children. while the women functioned as gatherers and weavers and brought up the female offspring. They were a gentle, un-warlike people. Their households were large, comprised of all the blood and marriage related men and women. The rhythm of their lives was oriented to the progression of the seasons; in spring and summer they lived almost totally out of doors, gathering and storing food, holding tribal feasts, and preparing for the winter months, when they lived a more retired existence, staying indoors and weaving, making tools, and rationing the food to last till the spring thaws. Everything they possessed was shared collectively, and they had no notions of private property or ownership.

The Yahi numbered between three and four thousand in January of 1864. "By the end of the same year, their massacre was complete except for remnants of families or bands, or for single individuals." They fought hard to hold on to their land and maintain themselves, but the Yahi were ill-equipped to meet, in kind, the onslaughts of the whites. "They were unmounted and unarmed, had never heard or dreamed of the art of scalping...they had no weapons of war as such. When they defended themselves, their arsenal was no more than the hand-made tools by which they lived; bow and arrow, spear, knife, harpoon, rock and sling."They were hunted and slaughtered, irrespective of age or sex, by whites who looked upon them--out of prejudice and ignorance--as savages.

The massacre of his people was in progress when Ishi was born. His young life was one of being constantly on the move, hiding, running and dodging the white murderers. To a man, his people chose to resist and flee and even die rather than succumb to the whites and go voluntarily to the barren reservations or become slaves or concubines to white masters. By the time Ishi reached young manhood, all but about twelve of the Yahi had been exterminated. The small band that remained went into deep concealment in the California hills, a withdrawal that was so total and so successful that for twelve years they survived without being so much as glimpsed once; this feat became "easier" as one by one the members of the band died of weakness or starvation. The whites were convinced that all the Yahi were dead, and remained so until Ishi, lonely, afraid and no longer caring what happened to him, came out of hiding.

Ishi only lived for four years after his survival. Ms. Kroeber describes how, protected by his anthropologist friends, he lived out those years in relative peace and with a cheerfulness that defied his sorrowful life experience. This book is written with simplicity and honesty, and it provides valuable insight into the Yahi culture. Ishi is referred to continually as "a stone age man," a sociological term which the author uses to describe the traditional Yahi way of life; the term is inappropriate in that it implies great primitiveness and a crude lifestyle. In fact, according to what Ishi tells, the Yahi's social structure was complex and highly developed, and their lives were not primitive so much as natural, centered upon the basics of food, shelter and familial loyalty. Ms. Kroeber approaches her subject from a scientific point of view, which lends objectivity to her study but tends to diminish the humanity of Ishi, and treat him as an interesting anthropological specimen. In this sense, she fits into Ishi's description of white people--"sophisticated children, smart, but not wise." Nonetheless, Ishi's story speaks to the reader. It is rich in information, heart-breaking in essence, and a strong, an irrefutable reminder of the bloodbath out of which white civilization in America arose.