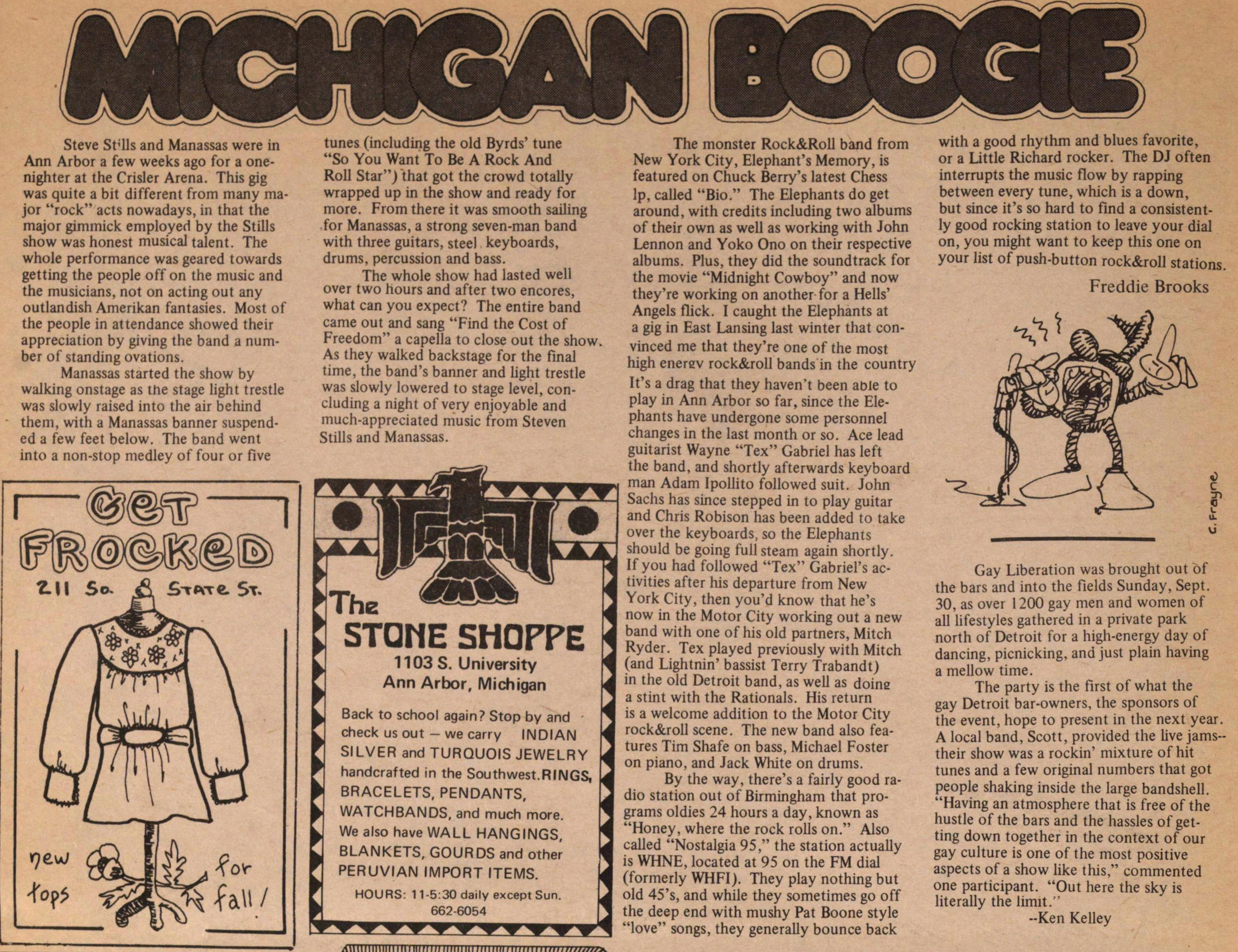 Steve Stills and Manassas were in Ann Arbor a few weeks ago for a one-nighter at the Crisler Arena. This gig was quite a bit different from many major "rock" acts nowadays, in that the major gimmick employed by the Stills show was honest musical talent. The whole performance was geared towards getting the people off on the music and the musicians, not on acting out any outlandish Amerikan fantasies. Most of the people in attendance showed their appreciation by giving the band a number of standing ovations.

Manassas started the show by walking onstage as the stage light trestle was slowly raised into the air behind 1 them, with a Manassas banner suspended a few feet below. The band went into a non-stop medley of four or five tunes (includíng the old Byrds' tune "So You Want To Be A Rock And Roll Star") that got the crowd totally wrapped up in the show and ready for more. From there it was smooth sailing for Manassas, a strong seven-man band with three guitars, steel keyboards, drums, percussion and bass.

The whole show had lasted well over two hours and after two encores, what can you expect? The entire band came out and sang "Find the Cost of Freedom" a capella to close out the show. As they walked backstage for the final time, the band's banner and light trestle was slowly lowered to stage level, concluding a night of very enjoyable and much-appreciated music from Steven Stills and Manassas.

The monster Rock&Roll band from New York City, Elephant's Memory, is featured on Chuck Berry's latest Chess lp, called "Bio." The Elephants do get around, with credits including two albums of their own as well as working with John Lennon and Yoko Ono on their respective albums. Plus, they did the soundtrack for the movie "Midnight Cowboy" and now they're working on another for a Hells' Angels flick. I caught the Elephants at a gig in East Lansing last winter that convinced me that they're one of the most high energy rock&roll bands in the country. It's a drag that they haven't been able to play in Ann Arbor so far, since the Elephants have undergone some personnel changes in the last month or so. Ace lead guitarist Wayne "Tex" Gabriel has left the band, and shortly afterwards keyboard man Adam Ipollito followed suit. John Sachs has since stepped in to play guitar and Chris Robison has been added to take over the keyboards, so the Elephants should be going full steam again shortly. If you had followed "Tex" Gabriel's activities after his departure from New York City, then you'd know that he's now in the Motor City working out a new band with one of his old partners, Mitch Ryder. Tex played previously with Mitch (and Lightnin' bassist Terry Trabandt) in the old Detroit band, as well as doing a stint with the Rationals. His return is a welcome addition to the Motor City rock&roll scene. The new band also features Tim Shafe on bass, Michael Foster on piano, and Jack White on drums.

By the way, there's a fairly good radio station out of Birmingham that programs oldies 24 hours a day, known as "Honey, where the rock rolls on." Also called "Nostalgia 95," the station actually is WHNE, located at 95 on the FM dial (formerly WHFI). They play nothing but old 45's, and while they sometimes go off the deep end with mushy Pat Boone style "love" songs, they generally bounce back with a good rhythm and blues favorite, or a Little Richard rocker. The DJ often interrupts the music flow by rapping between every tune, which is a down, but since it's so hard to find a consistently good rocking station to leave your dial on, you might want to keep this one on your list of push-button rock&roll stations.

Gay Liberation was brought out of the bars and into the fields Sunday, Sept. 30, as over 1200 gay men and women of all lifestyles gathered in a private park north of Detroit for a high-energy day of dancing, picnicking, and just plain having a mellow time.

The party is the first of what the gay Detroit bar-owners, the sponsors of the event, hope to present in the next year. A local band, Scott, provided the live jams-their show was a rockin' mixture of hit tunes and a few original numbers that got people shaking inside the large bandshell. "Having an atmosphere that is free of the hustle of the bars and the hassles of getting down together in the context of our gay culture is one of the most positive aspects of a show like this," commented one participant. "Out here the sky is literally the limit."

Get Frocked
211 So. State St
New Tops For Fall!

Back to school again? Stop by and check us out -- we carry INDIAN SILVER and TURQUOIS JERELRY handcrafted in the Southwest. RINGS, BRACELETS, PENDANTS, WATCHBANDS, and much more. We also have WALL HANGINGS, BLANKETS, GOURDS, and other PERUVIAN IMPORT ITEMS.
HOURS: 11-5:30 daily except Sun.
662-6054