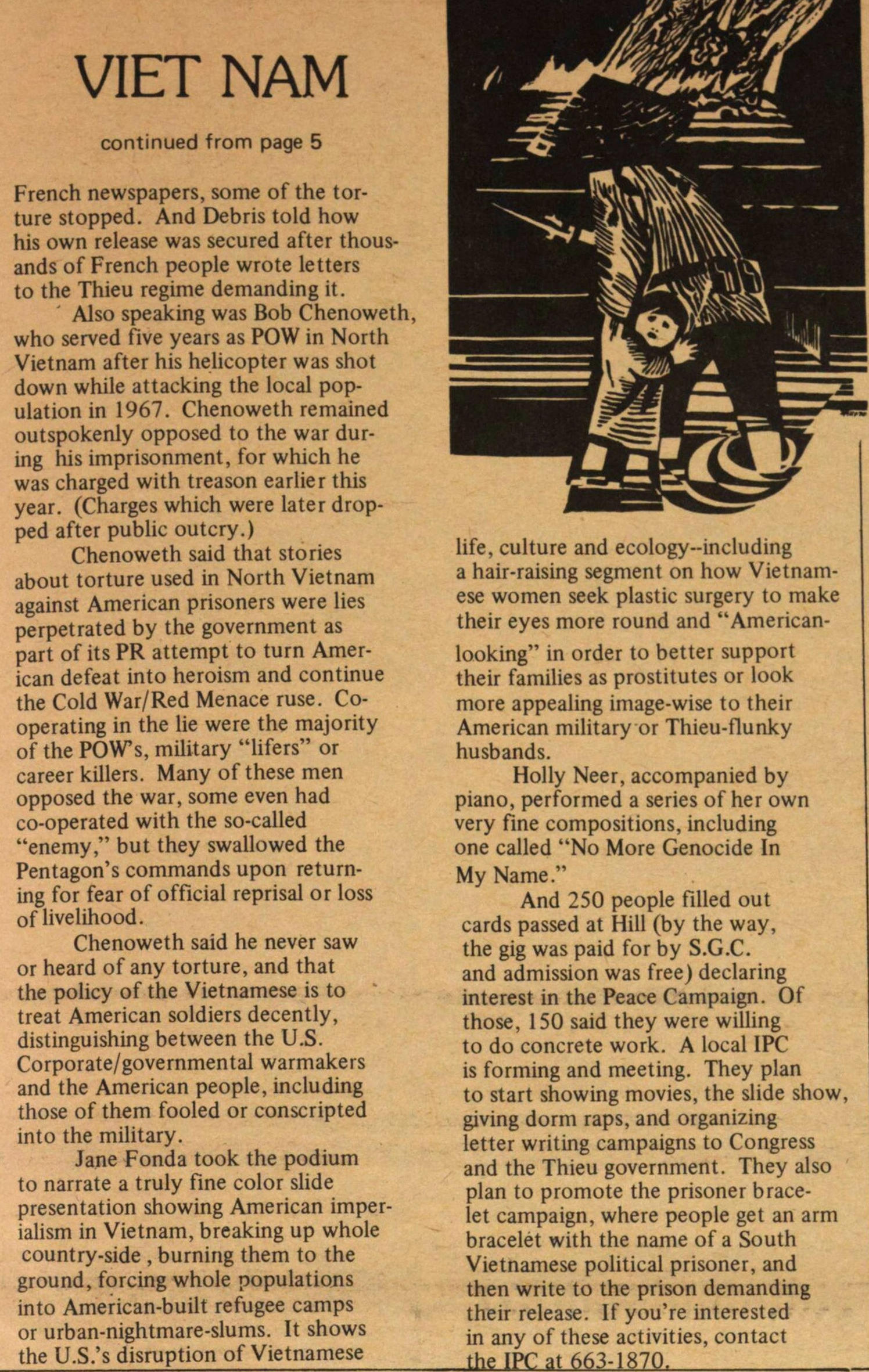 French newspapers, some of the torture stopped. And Debris told how his own release was secured after thousands of French people wrote letters to the Thieu regime demanding it.

Also speaking was Bob Chenoweth, who served five years as POW in North Vietnam after his helicopter was shot down while attacking the local population in 1967. Chenoweth remained outspokenly opposed to the war during his imprisonment, for which he was charged with treason earlier this year. (Charges which were later dropped after public outcry.)

Chenoweth said that stories about torture used in North Vietnam against American prisoners were lies perpetrated by the government as part of its PR attempt to turn American defeat into heroism and continue the Cold War/Red Menace ruse. Cooperating in the lie were the majority of the POW's, military "lifers" or career killers. Many of these men opposed the war, some even had co-operated with the so-called "enemy," but they swallowed the Pentagon's commands upon returning for fear of official reprisal or loss of livelihood.

Chenoweth said he never saw or heard of any torture, and that the policy of the Vietnamese is to treat American soldiers decently, distinguishing between the U.S. Corporate/governmental war makers and the American people, including those of them fooled or conscripted into the military.

Jane Fonda took the podium to narrate a truly fine color slide presentation showing American imperialism in Vietnam, breaking up the whole country-side, burning them to the ground, forcing whole populations into American-built refugee camps or urban-nightmare-slums. It shows the U.S.'s disruption of Vietnamese life, culture and ecology-including a hair-raising segment on how Vietnamese women seek plastic surgery to make their eyes more round and "American looking" in order to better support their families as prostitutes or look more appealing image-wise to their American military or Thieu flunky husbands.

Holly Neer, accompanied by piano, performed a series of her own very fine compositions, including one called "No More Genocide In My Name."

And 250 people filled out cards passed at Hill (by the way, the gig was paid for by S.G.C. and admission was free) declaring interest in the Peace Campaign. Of those, 150 said they were willing to do concrete work. A local IPC is forming and meeting. They plan to start showing movies, the slide show, giving dorm raps, and organizing letter writing campaigns to Congress and the Thieu government. They also plan to promote the prisoner bracelet campaign, where people get an arm bracelet with the name of a South Vietnamese political prisoner, and then write to the prison demanding their release. If you're interested in any of these activities, contact the IPT at 663-1870.