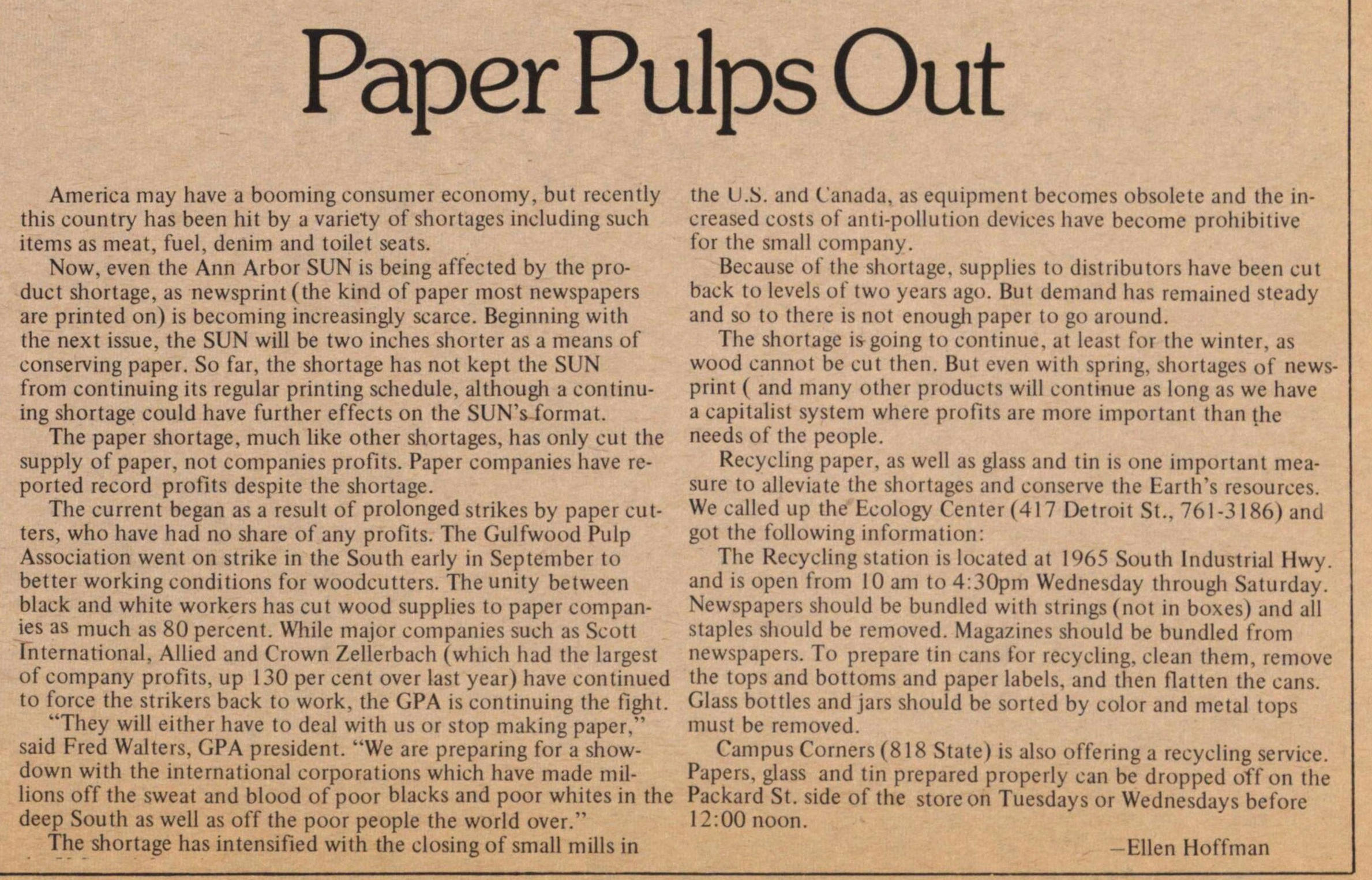 America may have a booming consumer economy, but recently this country has been hit by a variety of shortages including such items as meat, fuel, denim and toilet seats. Now, even the Ann Arbor SUN is being affected by the product shortage, as newsprint(the kind of paper most newspapers are printed on) is becoming increasingly scarce. Beginning with the next issue, the SUN will be two inches shorter as a means of conserving paper. So far, the shortage has not kept the SUN trom continuing its regular printing schedule, although a continuing shortage could have further effects on the SUN's formal. The paper shortage, much like other shortages, has only cut the supply of paper, not companies profits. Paper companies have reported record profits despite the shortage. The current began as a result of prolonged strikes by paper cutters, who have had no share of any profits. The Gulfwood Pulp Association went on strike in the South early in September to better working conditions for woodcutters. The unity between black and white workers has cut wood supplies to paper companies as much as 80 percent. While major companies such as Scott international, Allied and Crown Zellerbach (which had the largest ofcompany profits, up 130 per cent over last year) have continued to force the strikers back to work, the GPA is continuing the tlglit. "They will either have to deal with us or stop making paper," said Fred Walters, GPA president. "We are preparing for a showdown with the international corporations which have made millions off the sweat and blood of poor blacks and poor whites in the deep South as well as off the poor people the world over." The shortage has intensified with the closing of small milis in the U.S. and Canada, as equipmcnt becomes obsolete and the increasedcosts of anti-poüution deviceshave become prohibitivo for the small company. Because of the shortage, supplies to distributors have been cut back to levéis of two years ago. But demand has remained steady and so to there is not enough paper to go around. The shortage isgoing to continue, at least for the winter, as wood cannot be cut then. But even with spring, shortages of newsprint ( and man y othei producís will continue as long as we have a capitalist system where profits are more important than the needs of the people. Recycling paper, as well as glass and tin is one important measure to alleviate the shortages and conserve the Earth's resources. Wecalled up the Ecology Center (41 7 Detroit St., 761-3 1X6) and got the following information: The Recycling station is located at 1965 South Industrial Hwy. and is open from 10 am to 4:30pm Wednesday througli Saturday. Newspapers should be bundled with Jtrings (not in boxes) and ail staples should be removed. Magazines should be bundled from newspapers. To prepare tin cans for recycling, clean them, remove the tops and bottoms and paper labels, and then Ratten the cans. Glass bottles and jars should be sorted by color and metal tops must be removed. Campus Corners (818 State) is also offering a recycling service. Papers, glass and tin prepared properly can be dropped off on the : Packard St. side of the store on Tuesdays or Wednesdays before 12:00 noon.