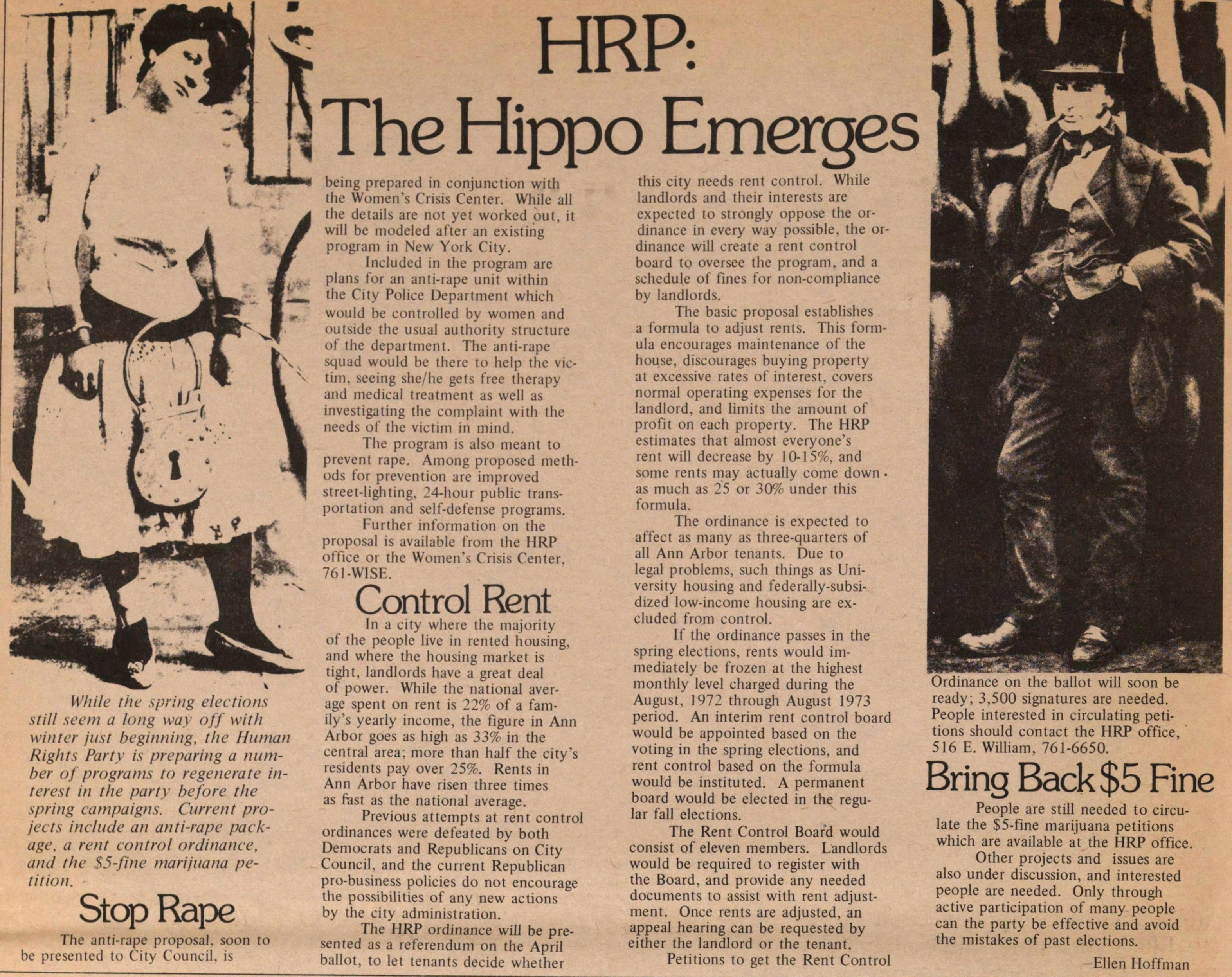 Whlle the spring etections still seem a long way off with winter jusl beginning, the Human Rights Pariy is preparing a number of programs to regenerare interest in the party before the spring campaigns. Curren t projects include an anti-rape package, a rent control or dinance, and the S5-fine marijuana petition. Stop Rape The anti-rape proposal. soon to be presented to City Council. is being prepared in conjunction with the Women's Crisis Center. While all the details are nut yet worked out, it will be modeled after an existing program in New York City. Included in the program are plans for an anti-rape unit wiiliin the City Pólice Department which would be controlled by women and outside the usual authority structure of the department. The anti-rape squad would be there to help the victim. seeing shehe gets free therapy and medical treatment as well as investigating the complaint with the needs of the victim in mind. The program is also meant to prevent rape. Among proposed methods for prevention are improved street-lighting. 24-hour public transportation and self-defense programs. Further Information on the proposal is available trom the HRP office or the Women's Crisis Center. 761-W1SE. Control Rent In a city where the majority of the people live in rented housing, and where the housing market is tight, landlords have a great deal of power. Wliile the national average spent on rent is 22% of a family's yearly bicorne, the figure in Ann Arbor goes as high as 337c in the central area; more than half the city's residents pay over 25%. Rents in Ann Arbor have risen three times as rast as the national average. Previous attempts at rent control ordinances were defeated by both Democrats and Republicans on City Council, and the current Republican pro-business policies do not encourage the possibilities of any new actions by the city administration. The HRP ordinance will be presented as a referendum on the April ballot, to let tenants decide whether this city needs rent control. While landlords and theil interests are expected to strongly oppose the ordinance in every way possible, the ordinance will créate a rent control board to oversee the program, and a schcdulc of fines for non-compliance by landlords. The bask proposal establishes a formula to adjust rents. This formula encouiagcs maintenance of the house, discourages buying property at excessive rates of interest, covers normal operating expenses for the landlord, und limits the amount of profit on each property. The HRP estimates that almost everyone's rent will decrease by 10-15%, and some rents may actually come down as much as 25 or 30% under this formula. The ordinance is expected to affect as many as three-quarters of all Ann Arbor tenants. Due to legal problems, such things as University housing and federally-subsidized low-income housing are excluded from control. [f the ordinance passes in the spring elections, rents would immediately be frozen at the highest monthly level charged during the August, 1972 through August 1973 period. An interim rent control board would be appointed based on the voting in the spring elections, and rent control based on the formula would be instituted. A permanent board would be elected in the regular fall elections. The Rent Control Board would consist of eleven members. Landlords would be required to register with the Board, and provide any needed documents to assist with rent adjustment. Once rents are adjusted, an appeal hearing can be requested by either the landlord or the tenant. Petitions to get the Rent Control Ordinance on the ballot will soon be ready; 3,500 signatures are needed. People interested in circulating petitions should contact the HRP office, 516 E. William, 761-6650. BringBack$5Fine People are still needed to circuíate the $5-fine marijuana petitions which are available at the HRP office. Other projects and issues are also under discussion, and interested people are needed. Only through active participation of many people can the party be effective and avoid the mistakes of past elections.