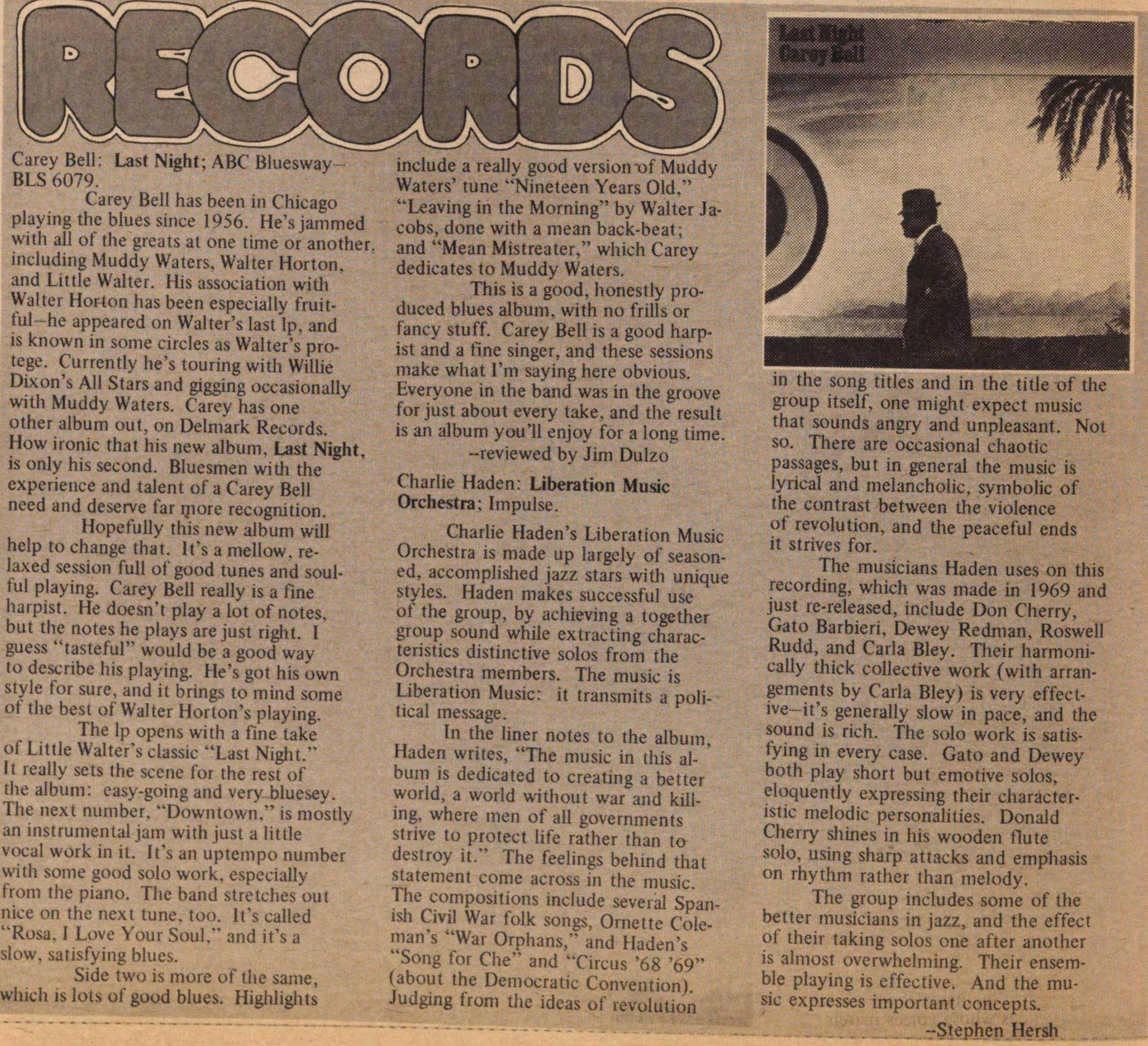 Carey Bell: Last Night; ABC BlueswayBLS 6079. Carey Bell has been in Chicago playing the blues since 1956. He'sjammed with all of the greats at one time or another. including Muddy Waters, Wal ter Horton, and Little Walter. His association with Wal ter Horton has been especially fruitful-he appeared on Walter's last lp, and is known in some cireles as Walter's protege. Currently he's touring with Willie Dixon's All Stars and gigging occasionally with Muddy Waters. Carey has one other album out, on Delmark Records. How ironie that his new album. Last Night, is only his second. Bluesmen with the experience and talent of a Carey Bell need and deserve far more recognition. Hopefully this new album wiil help to change that. It's a mellow. relaxed session full of good tunes and soulful piaying. Carey Bell really is a fine harpist. He doesn't play a lot of notes, but the notes he plays are just right. I guess "tasteful" would be a good way to describe his playing. He's got his own style for sure, and it brings to mind some ot the best of Walter Horton's playing. The lp opens with a fine take of Little Walter's classic "Last Night." It really sets the scenc for the rest of the album: easy-going and very bluesey. The next number, "Downtown," is mostly an instrumental jam with just a little vocal work in it. It's an uptempo number with some good solo work, especially from the piano. The band stretches out nice on the next tune, too. It's called "Rosa, I Love Your Soul," and it's a slow. satisfying blues. Side two is more of the same, which islots of good blues. Highüghts include a really good version xtf Muddy Waters' tune "Nineteen Years Old," "Leaving in the Morning" by Walter Jacobs, done with a mean back-beat; and "Mean Mistreater," which Carey dedicates to Muddy Waters. This is a good, honestly produced blues album, with no frills or fancy stuff. Carey Bell is a good harpist and a fine singer, and these sessions make what I'm saying here obvious. Everyone in the band was in the groove for just about every take, and the result is an album you'il enjoy for a long time. -reviewed by Jim Dulzo Chartie Haden: Liberation Music Orchestra; Impulse. Charlie Haden's Liberation Music Orchestra is made up largely of seasoned, accomplished jazz stars with unique styles. Haden makes successful use of the group, by achieving a together group sound while extracting characteristics distinctive solos from the Orchestra members. The music is Liberation Music: it transmits a political message. In the liner notes to the album. Haden writes, "The music in this ' bum is dedicated to creating a bet ter world, a world without war and killing, where men of all governments strive to protect life rather than to destroy it." The feelings behind that statement come across in the music. The compositions include severa! Spanish Civil War folk songs, Ornette Coleman "s "War Orphans," and Haden's Song for Che" and "Circus '68 '69" (about the Democratie Convention). Judging from the ideas of revolution in the song titles and in the title of the group itself, one might expect music that sounds angry and unpleasant. Not so. There are occasional chaotic passages, but in general the music is lyrical and melancholie, symbolic of the contrast between the violence of revolution, and the peaceful ends it strives for. The musicians Haden uses on this recording, which was made in 1969 and just re-released, include Don Cherry, Gato Barbieri, Dewey Redman, Roswell Rudd, and Carla Bley. Their harmonically thick collective work (with arrangements by Carla Bley) is very effective-it's generally slow in pace, and the sound is rich. The solo work is satisfying in every case. Gato and Dewey both play short but emotive solos, eloquentiy expressing their characteristic melodie personalices. Donald Cherry sliixies in his wooden flute solo, using sharp attacks and emphasis on rhythm rather than melody. The group includes some of the better musicians in jazz, and the effect of their taking solos one after anothcr is almost overwhelming. Their ensemble playing is effective. And the music expresses important concepts.