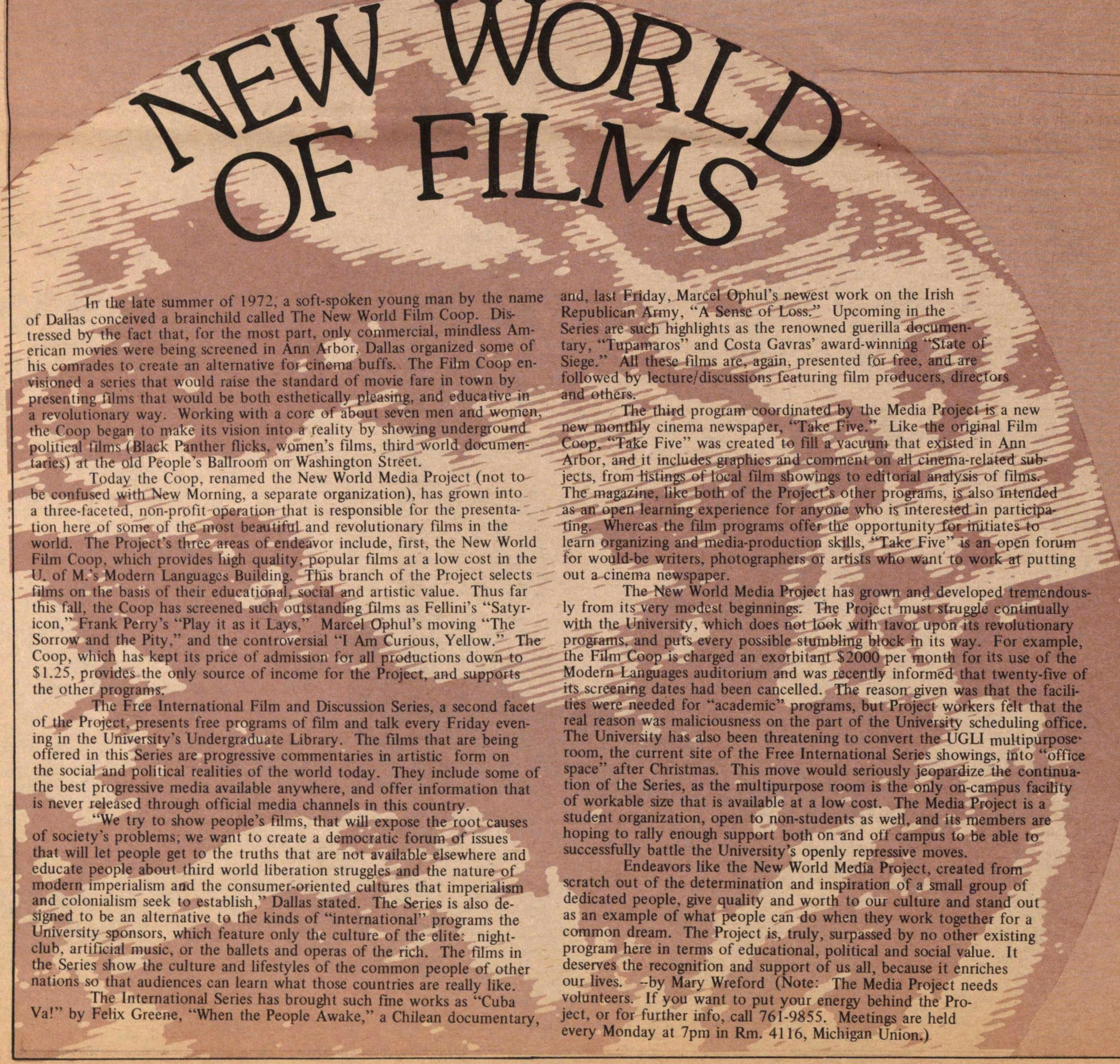 In the late summer of 1972. a soft-spoken young man by the name of Dallas conceived a brainchild called The New World Film Coop. Distressed by the fact that, for the most part, only commercial, mindless American movies were being screened in Ann Arbor, Dallas organized some of his comrades to créate an alternative for cinema buffs. The Film Coop envisioned a series that would raise the standard of movie fare in town by presenting films that would be both esthetically pleasing, and educative in a revolutionary way. Working with a core of about seven men and women, the Coop began to make its visión into a reality by showing underground political films (Black l'anther flicks. women's films, third world documentaries) at the old People's Ballroom on Washington Street. Today the Coop, renamed the New World Media Project (not to bc confused with New Morning, a separate organization), has grown into a three-faceted. non-profit operation that is responsible for the presentation here of sonte of the most beautiful and revolutionary films in the world. The Project's thrce areas of endeavor include, first, the New World Film Coop, which provides high quality, popular films at a low cost in the U. of M.'s Mudern Languagcs Building. This branch of the Project selects films on the basis of their educational, social and artistic value. Thus far this fall, the Coop has screened such outstanding films as Fellinfs "Satyricon." Frank Perry's "Play it as it Lays," Marcel Ophul's moving "The Sorrow and the Pity," and the controversial "I Am Curious, Yellow." The Coop, which has kept its price of admission for all productions down to $1.25, provides the only source of income for the Project, and supports the other programs. The Frce International Film and Discussion Series, a second facet of the Project, presents free programs of film and talk every Friday evening in the University's Undergraduate Library. The films that are being offered in this Series are progressive commentaries in artistic form on the social and political realities of the world today. They include some of the best progressive media available anywhere, and offer information that is never releascd through official media channels in this country. "We try to show people's films, that will exposé the root causes of society's problems; we want to créate a democratie forum of issues that will let people get to the truths that are not available elsewhere and edúcate people about third world liberation struggles and the nature of modern imperialism and the consumer-oriented cultures that imperialism and colonialism seek to establish," Dallas stated. The Series is also designed to be an alternative to the kinds of "international" programs the University sponsors, which feature only the culture of the elite: nightclub, artificial music, or the ballets and operas of the nch. The films in the Series show the culture and lifestyles of the common people of other nations so that audiences can learn what those countries are really like. The International Series has brought such fine works as "Cuba Va!" by Felix Greene, "When the People Awake," a Chilean documentary, and, last Friday, Marcel Ophul's newest work on the Irish - Republican Army. "A Sensc of Loss." Upcoming in the Series are sucli highlights as the renowned guerilla documentary, "Tupamaros" and Costa Gavras' award-winning "State of Siege." All these films are. again, presented for tree, and are foHowed by lecturediscussions featuring film producers, directo and others. PJ iu ■" The tliird program coordinatcd by Üie Medi;i Project is a new new monthly cinema newspaper, "Take Five." Likc the original Film , Coop, "Take Five" was created to fill a vacuüm that existed in Ann Arbor, and it includes graphics and commciit on all cinema-related subjects, froni listings of local film sliowings to editorial analysis of films. The magazine, like both of the Project's other programs, is also intended , as an open learning experience for anyone who is mterested in participating. Whereas the film programs offer the opportunity for initiates to learn organizing and me dia-production skills, "Take Five" is an open forum for would-be writers, photographers or artists who want to work at putting out a cinema newspaper. WSg --" -É The New World Media Project has grown and developed tremendously from its very modest beginnings. The Project must struggle continually with the University, which does nut look wüh tavor upon its revolutionary programs, and puts every possible stumbling block in its way. For example, the Fílm Coop is charged an exorbitant $2000 per month for its use of the Modern Languages auditorium and was recently informed that twenty-five of its screening dates had been cancelled. The reason given was that the facilities were needed for "academie" programs, but Project workers félt that the real reason was maliciousness on the part of the University scheduling office. The University has also been threatening to convert the UGLI multipurposeroomthe current site of the Free International Series showings, into "office space" after Christmas. This move would seriously jeopardize the continuation of the Series, as the multipurpose room is the only on-campus facüity of workable size that is available at a low cost. The Media Project is a student organization, open to non-students as well, and its members are hoping to rally enough support both on and off campus to be able to successfully battle the University's openly repressive moves. Endeavors like the New World Media Project, created from scratch out of the determination and inspiration of a small group of dedicated people, give quality and worth to our culture and stand out as an example of what people can do when they work together for a common dream. The Project is, truly, surpassed by no other existing program here in terms of educational, political and social valué. It deserves the recognition and support of" us all, because it enriches our lives. --by Mary Wreford (Note: The Media Project needs volunteers. If you want to put your energy behind the Project, or for further info, cali 761-9855. Meetings are held every Monday at 7pm in Rm. 4116, Michigan Union.)