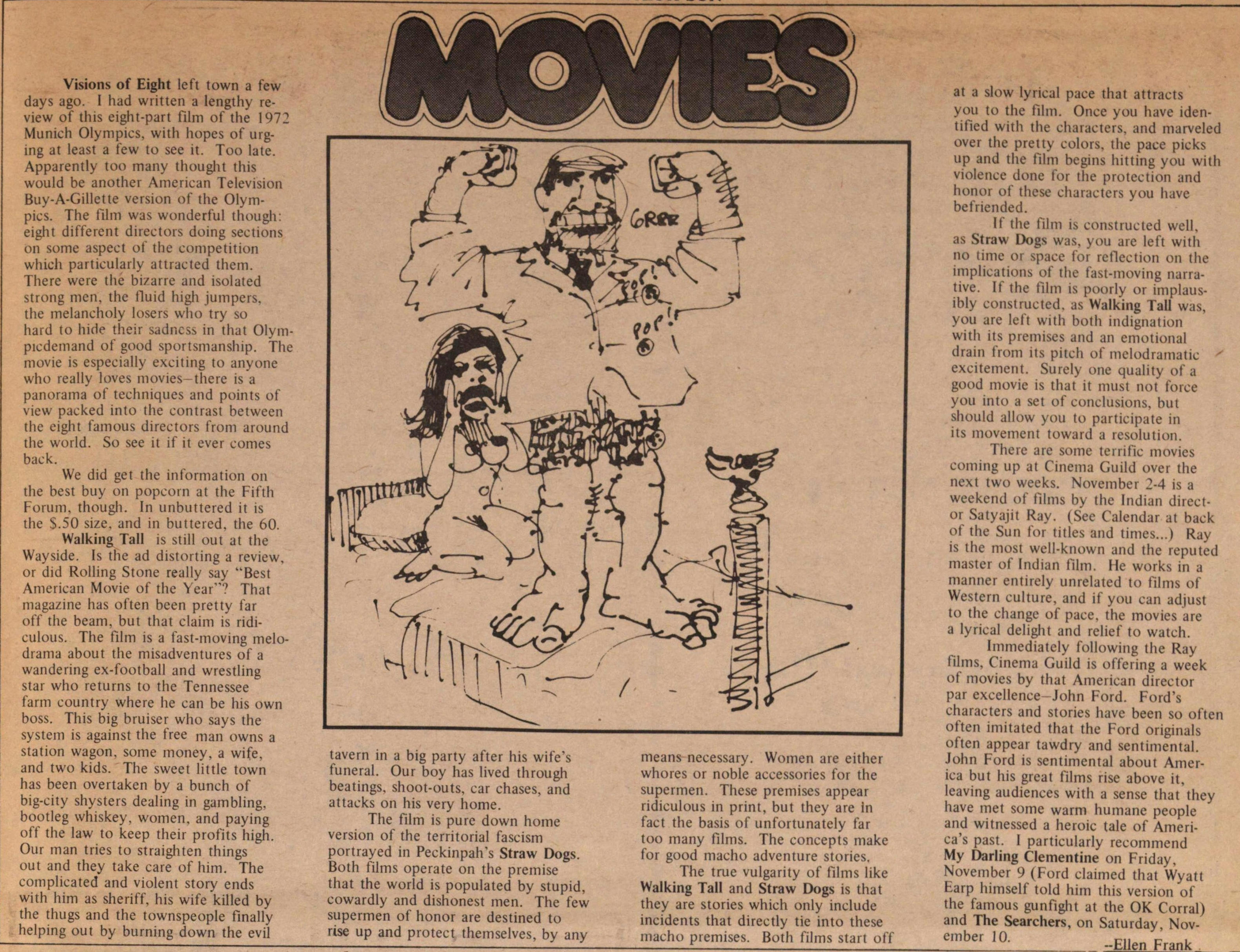 Visions of Eight left town a few days ago. I had written a lengthy review of this eight-part film of the 1972 Munich Olympics, with hopes of urging at least a few to see it. Too late. Apparently too many thought this would be another American Televisión Buy-A-Gillette version of the Olympics. The film was wonderful though: eight different directora doing sections on some aspect of the competition whicli particularly attracted them. There were thé bizarre and isolated strong men, the Huid high jumpers. the melancholy losers who try so hard to hide their sadncs;. in that Olympicdemand of good sportsmanship. The movie is especially exciting to anyone who really loves movies-there is a panorama of techniques and points of view packed into the contrast betwecn the eight famous directors from around the world. So see it if it ever comes back. We did get the information on the best buy on popcorn at the Fifth Forum, though. In unbuttered it is the S.50 size. and in buttered. the 60. Walking Tall is still out at the Wayside. Is the ad distorting a review, or did Rolling Stone really say "Best American Movie of the Year"? That magazine has often been pretty far off the beam, but that claim is ridiculous. The film is a fast-moving melodrama about the misadventures of a wandering ex-football and wrestling star who returns to the Tennessee farm country where he can be his own boss. This big bruiser who says the system is against the free man owns a station wagon, some money, a wife, and two kids. The sweet little town has been overtaken by a bunch of big-city shysters dealing in gambling. bootleg whiskey, women. and paying off the law to keep their profits high. Our man tries to straighten things out and they take care of liim. The complicated and violent story ends with him as sheriff, his wife killed by the thugs and the townspeople finally helping out by burning down the evil tavern in a big party after his wife's funeral. Our boy has lived through beatings. shoot-outs, car chases, and attacks on his very home. The film is pure down home version of the territorial fascism portrayed in Peckinpah's Straw Dogs. Both films opérate on the premise that the world is populated by stupid. cowardly and dishonest men. The few supermen of honor are destined to rise up and protect themselves, by any means necessary. Women are either whores or noble accessories for the supermen. These premises appear ridiculous in print, but they are in fact the basis of unfortunately far too many films. The concepts make for good macho adventure stories. The true vulgarity of films like Walking Tall and Straw Dogs is thut they are stories which only include incidents that directly tie into these macho premises. Both films start off at a slow lyrical pace that attracts you to the film. Once you have identified with the characters, and niürveled over the pretty colors. ilie pace picks up and the film begins hitting you with violence done for the protection and honor of' these characters you have befriended. II' the film i constructed well. as Straw Dogs was. you are left witli no time or space for reflection on the implications of the fast-moving narrative. If the film is poorly or irnplausibly constructed. as Walking Tall was, you are lelt with both indignation with its premises and an emotional drain l'rom its piich of melodramatic excitement. Surely one quality of a goud movie is that it must not Force you into a set of conclusions, but should allow jrou to particípate in its movement toward a resolution. There are some terrific movies coming up at Cinema Guild over the next two weeks. November 2-4 is a weekend of films by the Indian direct" or Satyajit Ray. (Sec Calendar at back of the Sun lor tilles and times...) Ray is the most well-known and the reputed master of fndian film. He worki in a manner entircly unrelated to films of Western culture, and il you can adjust to the change of pace, the movies are a lyrical delight and relief to watch. Immediatcly following the Ray films. Cinema Guild is offering a week Of movies by that American director par excellence -John Ford. Ford's characters and stories have been so often often imitated that the Ford origináis often appear tawdry and sentimental. John Ford is sentimental aboul America but his great films rise above it, leaving audiences with a sense that they have met some warm humane people and witnessed a heroic tale of America's past. 1 particularly recommend My Darling Clementine on Friday, November 9 (Ford claimed that Wyatt Earp himself told him this version of the famous gunfight at the OK Corral) and The Searchers, on Saturday, ember 10.