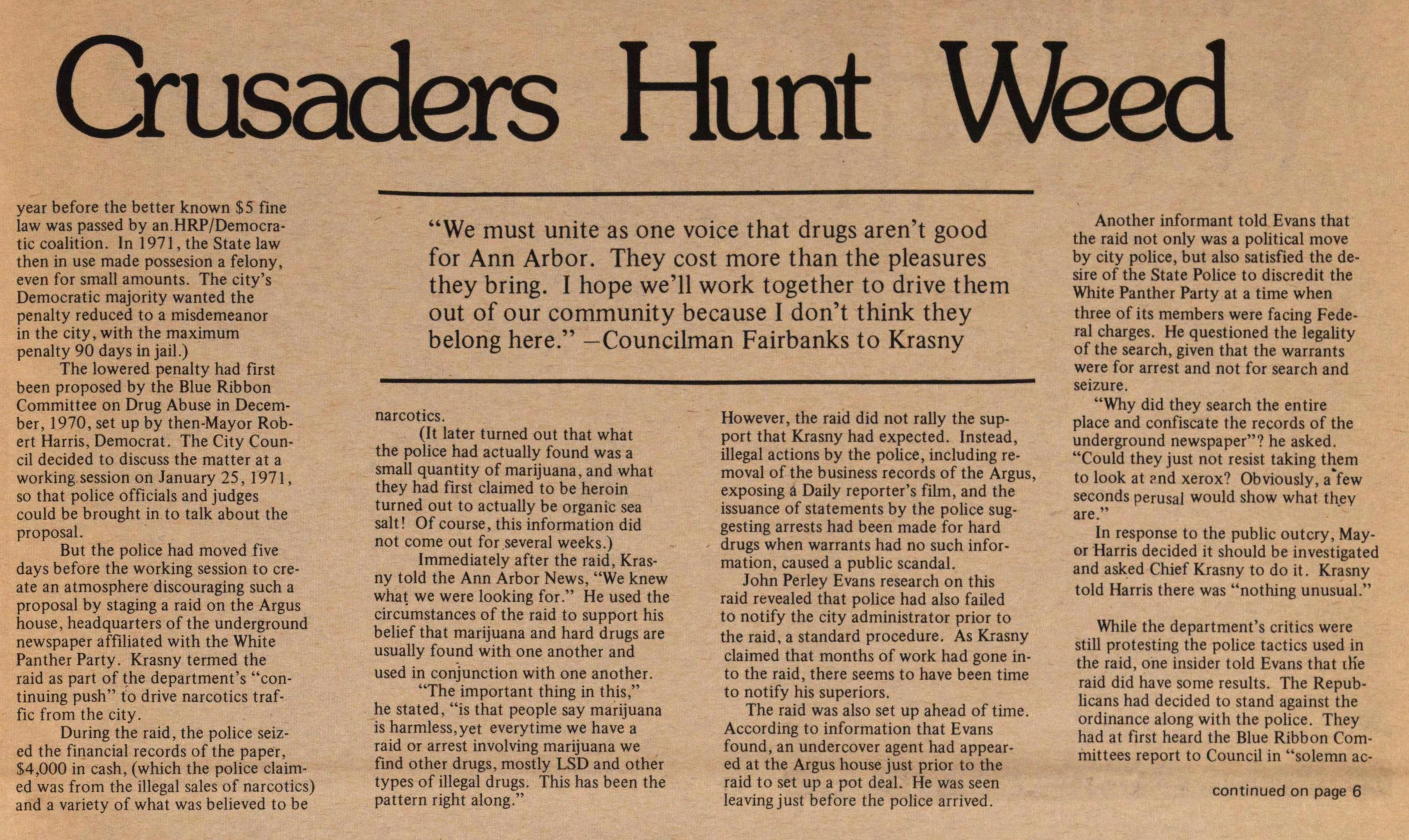 year before the better known $5 fine law was passed by an HRP/Democratic coalition. In 1971, the State law then in use made possession a felony, even for small amounts. The city's Democratic majority wanted the penalty reduced to a misdemeanor in the city, with the maximum penalty 90 days in jail.)

The lowered penalty had first been proposed by the Blue Ribbon Committee on Drug Abuse in December, 1970, set up by then-Mayor Robert Harris, Democrat. The City Council decided to discuss the matter at a working session on January 25, 1971, so that police officials and judges could be brought in to talk about the proposal.

But the police had moved five days before the working session to create an atmosphere discouraging such a proposal by staging a raid on the Argus house, headquarters of the underground newspaper affiliated with the White Panther Party. Krasny termed the raid as part of the department's "continuing push" to drive narcotics traffic from the city.

During the raid, the police seized the financial records of the paper, $4,000 in cash, (which the police claimed was from the illegal sales of narcotics) and a variety of what was believed to be narcotics.

(It later turned out that what the police had actually found was a small quantity of marijuana, and what they had first claimed to be heroin turned out to actually be organic sea salt! Of course, this information did not come out for several weeks.)

Immediately after the raid, Krasny told the Ann Arbor News, "We knew what we were looking for." He used the circumstances of the raid to support his belief that marijuana and hard drugs are usually found with one another and used in conjunction with one another.

"The important thing in this," he stated, "is that people say marijuana is harmless, yet everytime we have a raid or arrest involving marijuana we find other drugs, mostly LSD and other types of illegal drugs. This has been the pattern right along."

However, the raid did not rally the support that Krasny had expected. Instead, illegal actions by the police, including removal of the business records of the Argus, exposing a Daily reporter's film, and the issuance of statements by the police suggesting arrests had been made for hard drugs when warrants had no such information, caused a public scandal.

John Perley Evans research on this raid revealed that police had also failed to notify the city administrator prior to the raid, a standard procedure. As Krasny claimed that months of work had gone into the raid, there seems to have been time to notify his superiors.

The raid was also set up ahead of time. According to information that Evans found, an undercover agent had appeared at the Argus house just prior to the raid to set up a pot deal. He was seen leaving just before the police arrived.

Another informant told Evans that the raid not only was a political move by city police, but also satisfied the desire of the State Police to discredit the White Panther Party at a time when three of its members were facing Federal charges. He questioned the legality of the search, given that the warrants were for arrest and not for search and seizure.

"Why did they search the entire place and confiscate the records of the underground newspaper"? he asked. "Could they just not resist taking them to look at and xerox? Obviously, a few seconds perusal would show what they are."

In response to the public outcry, Mayor Harris decided it should be investigated and asked Chief Krasny to do it. Krasny told Harris there was "nothing unusual."

While the department's critics were still protesting the police tactics used in the raid, one insider told Evans that the raid did have some results. The Republicans had decided to stand against the ordinance along with the police. They had at first heard the Blue Ribbon Committees report to Council in "solemn ac-

"We must unite as one voice that drugs aren't good for Ann Arbor. They cost more than the pleasures they bring. I hope we'll work together to drive them out of our community because I don't think they belong here." -- Councilman Fairbanks to Krasny