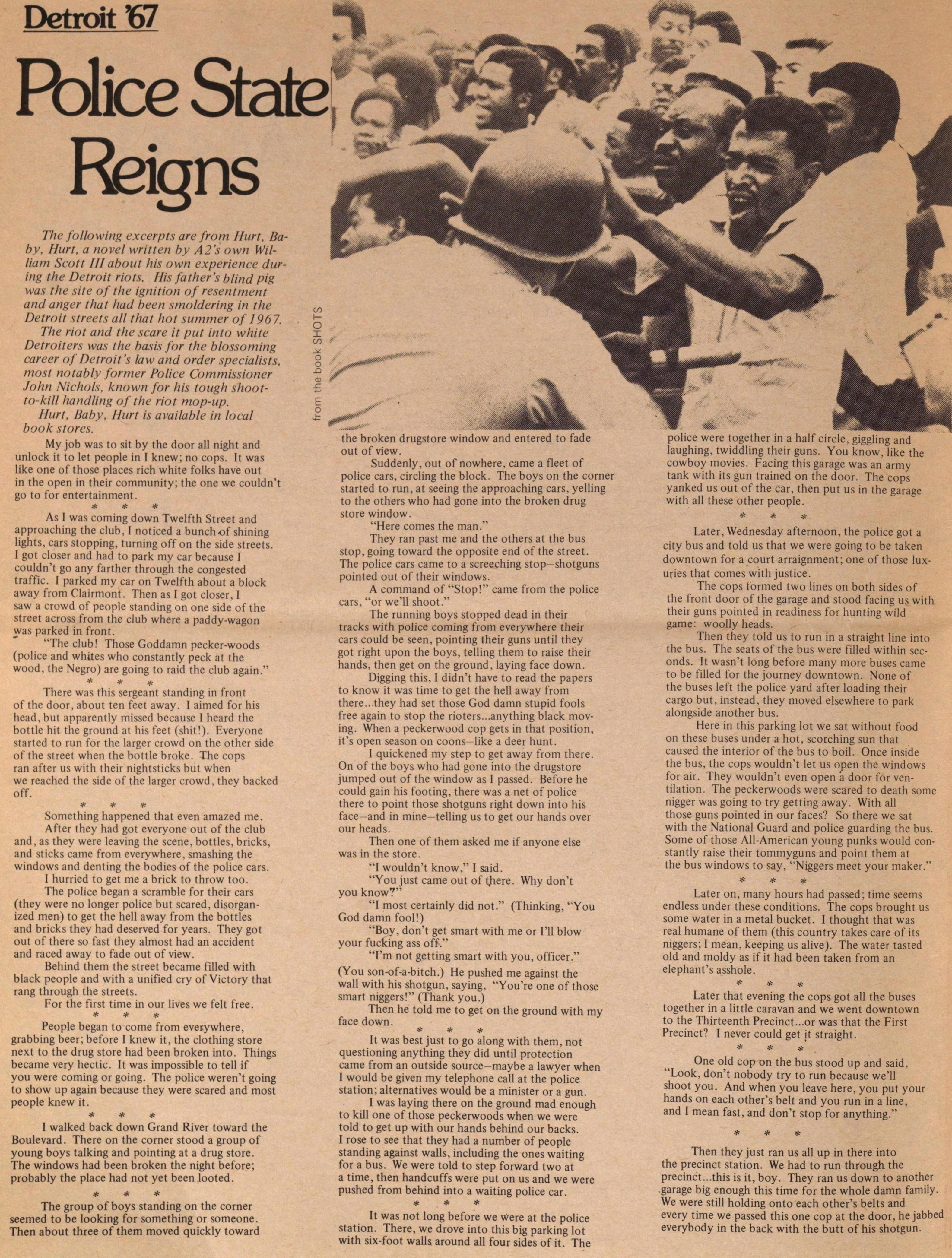 The following excerpts are from Hurt, Baby, Hurt, a novel written by A2's own William Scott III about his own experience during the Detroit riots. His father's blind pig was the site of the ignition of resentment and anger that had been smoldering in the Detroit streets all that hot summer of 1967.

The riot and the scare it put into white Detroiters was the basis for the blossoming career of Detroit's law and order specialists, most notably former Police Commissioner John Nichols, known for his tough shoot-to-kill handing of the riot mop-up.

My job was to sit by the door all night and unlock it to let people in I knew; no cops. It was like one of those places rich white folks have out in the open in their community; the one we couldn't go to for entertainment.

As I was coming down Twelfth Street and approaching the club, I noticed a bunch of shining lights, cars stopping, turning off on the side streets. I got closer and had to park my car because I couldn't go any farther through the congested traffic. I parked my car on Twelfth about a block away from Clairmont. Then as I got closer, I saw a crowd of people standing on one side of the street across from the club where a paddy-wagon was parked in front.

"The club! Those Goddamn pecker-woods (police and whites who constantly peck at the wood, the Negro) are going to raid the club again."

There was this sergeant standing in front of the door, about ten feet away. I aimed for his head, but apparently missed because I heard the bottle hit the ground at his feet (shit!). Everyone started to run for the larger crowd on the other side of the street when the bottle broke. The cops ran after us with their nightsticks but when we reached the side of the larger crowd, they backed off.

Something happened that even amazed me.

After they had got everyone out of the club and, as they were leaving the scene, bottles, bricks, and sticks came from everywhere, smashing the windows and denting the bodies of the police cars.

I hurried to get me a brick to throw too.

The police began a scramble for their cars (they were no longer police but scared, disorganized men) to get the hell away from the bottles and bricks they had deserved for years. They got out of there so fast they almost had an accident and raced away to fade out of view.

Behind them the street became filled with black people and with a unified cry of Victory that rang through the streets.

For the first time in our lives we felt free.

People began to come from everywhere, grabbing beer; before I knew it, the clothing store next to the drug store had been broken into. Things became very hectic. It was impossible to tell if you were coming or going. The police weren't going to show up again because they were scared and most people knew it.

I walked back down Grand River toward the Boulevard. There on the corner stood a group of young boys talking and pointing at a drug store. The windows had been broken the night before; probably the place had not yet been looted.

The group of boys standing on the corner seemed to be looking for something or someone. Then about three of them moved quickly toward the broken drugstore window and entered to fade out of view.

Suddenly, out of nowhere, came a fleet of police cars, circling the block. The boys on the corner started to run, at seeing the approaching cars, yelling to the others who had gone into the broken drug store window.

They ran past me and the others at the bus stop, going toward the opposite end of the street. The police cars came to a screeching stop -- shotguns pointed out of their windows.

A command of "Stop!" came from the police cars, "or we'll shoot."

The running boys stopped dead in their tracks with police coming from everywhere their cars could be seen, pointing their guns until they got right upon the boys, telling them to raise their hands, then get on the ground, laying face down.

Digging this, I didn't have to read the papers to know it was time to get the hell away from there ... they had set those God damn stupid fools free again to stop the rioters ... anything black moving. When a peckerwood cop gets in that position, it's open season on coons -- like a deer hunt.

I quickened my step to get away from there. One of the boys who had gone into the drugstore jumped out of the window as I passed. Before he could gain his footing, there was a net of police there to point those shotguns right down into his face -- and in mine -- telling us to get our hands over our heads.

Then one of them asked me if anyone else was in the store.

"You just came out of there. Why don't you know?"

"I most certainly did not." (Thinking, "You God damn fool!")

"Boy, don't get smart with me or I'll blow your fucking ass off."

"I'm not getting smart with you, officer." (You son-of-a-bitch.) He pushed me against the wall with his shotgun, saying, "You're one of those smart niggers!" (Thank you.)

Then he told me to get on the ground with my face down.

It was best just to go along with them, not questioning anything they did until protection came from an outside source -- maybe a lawyer when I would be given my telephone call at the police station; alternatives would be a minister or a gun.

I was laying there on the ground mad enough to kill one of those peckerwoods when we were told to get up with our hands behind our backs. I rose to see that they had a number of people standing against walls, including the ones waiting for a bus. We were told to step forward two at a time, then handcuffs were put on us and we were pushed from behind into a waiting police car.

It was not long before we were at the police station. There, we drove into this big parking lot with six-foot walls around all four sides of it. The police were together in a half circle, giggling and laughing, twiddling their guns. You know, like the cowboy movies. Facing this garage was an army tank with its gun trained on the door. The cops yanked us out of the car, then put us in the garage with all these other people.

Later, Wednesday afternoon, the police got a city bus and told us that we were going to be taken downtown for a court arraignment; one of those luxuries that comes with justice.

The cops formed two lines on both sides of the front door of the garage and stood facing us with their guns pointed in readiness for hunting wild game: woolly heads.

Then they told us to run in a straight line into the bus. The seats of the bus were filled within seconds. It wasn't long before many more buses came to be filled for the journey downtown. None of the buses left the police yard after loading their cargo but, instead, they moved elsewhere to park alongside another bus.

Here in this parking lot we sat without food on these buses under a hot, scorching sun that caused the interior of the bus to boil. Once inside the bus, the cops wouldn't let us open the windows for air. They wouldn't even open a door for ventilation. The peckerwoods were scared to death some nigger was going to try getting away. With all those guns pointed in our faces? So there we sat with the National Guard and police guarding the bus. Some of those All-American young punks would constantly raise their tommyguns and point them at the bus windows to say, "Niggers meet your maker."

Later on, many hours had passed; time seems endless under these conditions. The cops brought us some water in a metal bucket. I thought that was real humane of them (this country takes care of its niggers; I mean, keeping us alive). The water tasted old and moldy as if it had been taken from an elephant's asshole.

Later that evening the cops got all the buses together in a little caravan and we went downtown to the Thirteenth Precinct ... or was that the First Precinct? I never could get it straight.

One old cop on the bus stood up and said, "Look, don't nobody try to run because we'll shoot you. And when you leave here, you put your hands on each other's belt and you run in a line, and I mean fast, and don't stop for anything."

Then they just ran us all up in there into the precinct station. We had to run through the precinct ... this is it, boy. They ran us down to another garage big enough this time for the whole damn family. We were still holding onto each other's belts and every time we passed this one cop at the door, he jabbed everybody in the back with the butt of his shotgun.

photo credit: from the book SHOTS