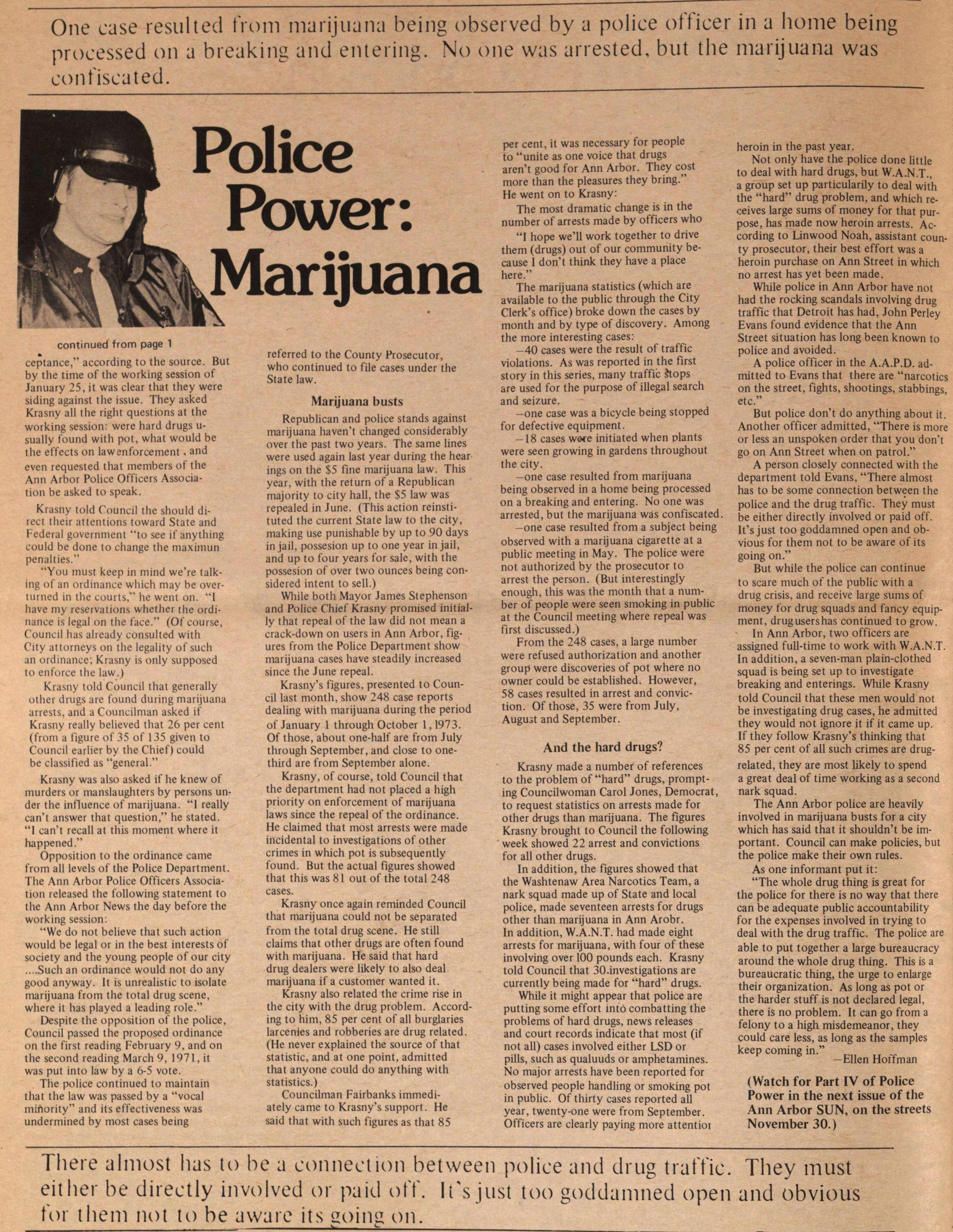 ceptance," according to the source. But by the time of the working session of January 25, it was clear that they were siding against the issue. They asked Krasny all the right questions at the working session: were hard drugs usually found with pot, what would be the effects on law enforcement, and even requested that members of the Ann Arbor Police Officers Association be asked to speak.

Krasny told Council they should direct their attentions toward State and Federal government "to see if anything could be done to change the maximum penalties."

"You must keep in mind we're talking of an ordinance which may be overturned in the courts," he went on. "I have my reservations whether the ordinance is legal on the face." (Of course, Council has already consulted with City attorneys on the legality of such an ordinance; Krasny is only supposed to enforce the law.)

Krasny told Council that generally other drugs are found during marijuana arrests, and a Councilman asked if Krasny really believed that 26 per cent (from a figure of 35 of 135 given to Council earlier by the Chief) could be classified as "general."

Krasny was also asked if he knew of murders or manslaughters by persons under the influence of marijuana. "I really can't answer that question," he stated. "I can't recall at this moment where it happened."

Opposition to the ordinance came from all levels of the Police Department. The Ann Arbor Police Officers Association released the following statement to the Ann Arbor News the day before the working session:

"We do not believe that such action would be legal or in the best interests of society and the young people of our city...Such an ordinance would not do any good anyway. It is unrealistic to isolate marijuana from the total drug scene, where it has played a leading role."

Despite the opposition of the police, Council passed the proposed ordinance on the first reading February 9, and on the second reading March 9, 1971, it was put into law by a 6-5 vote.

The police continued to maintain that the law was passed by a "vocal minority" and its effectiveness was undermined by most cases being referred to the County Prosecutor, who continued to file cases under the State law.

Republican and police stands against marijuana haven't changed considerably over the past two years. The same lines were used again last year during the hearings on the $5 fine marijuana law. This year, with the return of a Republican majority to city hall, the $5 law was repealed in June. (This action reinstituted the current State law to the city, making use punishable by up to 90 days in jail, possession up to one year in jail, and up to four years for sale, with the possession of over two ounces being considered intent to sell.)

While both Mayor James Stephenson and Police Chief Krasny promised initially that repeal of the law did not mean a crack-down on users in Ann Arbor, figures from the Police Department show marijuana cases have steadily increased since the June repeal.

Krasny's figures, presented to Council last month, show 248 case reports dealing with marijuana during the period of January 1 through October 1, 1973. Of those, about one-half are from July through September, and close to one-third are from September alone.

Krasny, of course, told Council that the department had not placed a high priority on enforcement of marijuana laws since the repeal of the ordinance. He claimed that most arrests were made incidental to investigations of other crimes in which pot is subsequently found. But the actual figures showed that this was 81 out of the total 248 cases.

Krasny once again reminded Council that marijuana could not be separated from the total drug scene. He still claims that other drugs are often found with marijuana. He said that hard drug dealers were likely to also deal marijuana if a customer wanted it.

Krasny also related the crime rise in the city with the drug problem. According to him, 85 per cent of all burglaries larcenies and robberies are drug related. (He never explained the source of that statistic, and at one point, admitted that anyone could do anything with statistics.)

Councilman Fairbanks immediately came to Krasny's support. He said that with such figures as that 85 per cent, it was necessary for people to "unite as one voice that drugs aren't good for Ann Arbor. They cost more than the pleasures they bring." He went on to Krasny:

"I hope we'll work together to drive them (drugs) out of our community because I don't think they have a place here."

The marijuana statistics (which are available to the public through the City Clerk's office) broke down the cases by month and by type of discovery. Among the more interesting cases:

--40 cases were the result of traffic violations. As was reported in the first story in this series, many traffic stops are used for the purpose of illegal search and seizure.

--one case was a bicycle being stopped for defective equipment.

--18 cases ware initiated when plants were seen growing in gardens throughout the city.

--one case resulted from marijuana being observed in a home being processed on a breaking and entering. No one was arrested, but the marijuana was confiscated.

--one case resulted from a subject being observed with a marijuana cigarette at a public meeting in May. The police were not authorized by the prosecutor to arrest the person. (But interestingly enough, this was the month that a number of people were seen smoking in public at the Council meeting where repeal was first discussed.)

From the 248 cases, a large number were refused authorization and another group were discoveries of pot where no owner could be established. However, 58 cases resulted in arrest and conviction. Of those, 35 were from July, August and September.

And the hard drugs?

Krasny made a number of references to the problem of "hard" drugs, prompting Councilwoman Carol Jones, Democrat, to request statistics on arrests made for other drugs than marijuana. The figures Krasny brought to Council the following week showed 22 arrest and convictions for all other drugs.

In addition, the figures showed that the Washtenaw Area Narcotics Team, a nark squad made up of State and local police, made seventeen arrests for drugs other than marijuana in Ann Arbor. In addition, W.A.N.T. had made eight arrests for marijuana, with four of these involving over 100 pounds each. Krasny told Council that 30 investigations are currently being made for "hard" drugs.

While it might appear that police are putting some effort into combatting the problems of hard drugs, news releases and court records indicate that most (if not all) cases involved either LSD or pills, such as qualuuds or amphetamines. No major arrests have been reported for observed people handling or smoking pot in public. Of thirty cases reported all year, twenty-one were from September. Officers are clearly paying more attention

heroin in the past year.

Not only have the police done little to deal with hard drugs, but W.A.N.T., a group set up particularly to deal with the "hard" drug problem, and which receives large sums of money for that purpose, has made no heroin arrests. According to Linwood Noah, assistant county prosecutor, their best effort was a heroin purchase on Ann Street in which no arrest has yet been made.

While police in Ann Arbor have not had the rocking scandals involving drug traffic that Detroit has had, John Perley Evans found evidence that the Ann Street situation has long been known to police and avoided.

A police officer in the A.A.P.D. admitted to Evans that there are "narcotics on the street, fights, shootings, stabbings, etc."

But police don't do anything about it. Another officer admitted, "There is more or less an unspoken order that you don't go on Ann Street when on patrol."

A person closely connected with the department told Evans, "There almost has to be some connection between the police and the drug traffic. They must be either directly involved or paid off. It's just too goddamned open and obvious for them not to be aware of its going on."

But while the police can continue to scare much of the public with a drug crisis, and receive large sums of money for drug squads and fancy equipment, drug users have continued to grow.

In Ann Arbor, two officers are assigned full-time to work with W.A.N.T. In addition, a seven-man plain-clothed squad is being set up to investigate breaking and enterings. While Krasny told Council that these men would not be investigating drug cases, he admitted they would not ignore it if it carne up. If they follow Krasny's thinking that 85 per cent of all such crimes are drug-related, they are most likely to spend a great deal of time working as a second nark squad.

The Ann Arbor police are heavily involved in marijuana busts for a city which has said that it shouldn't be important. Council can make policies, but the police make their own rules.

As one informant put it:

"The whole drug thing is great for the police for there is no way that there can be adequate public accountability for the expenses involved in trying to deal with the drug traffic. The police are able to put together a large bureaucracy around the whole drug thing. This is a bureaucratic thing, the urge to enlarge their organization. As long as pot or the harder stuff is not declared legal, there is no problem. It can go from a felony to a high misdemeanor, they could care less, as long as the samples keep coming in."

(Watch for Part IV of Police Power in the next issue of the Ann Arbor SUN, on the streets November 30.)

One case resulted from marijuana being observed by a police officer in a home being processed on a breaking and entering. No one was arrested, but the marijuana was confiscated.

There almost has to be a connection between police and drug traffic. They must either be directly involved or paid off. It's just too goddamned open and obvious for them not to be aware its going on.