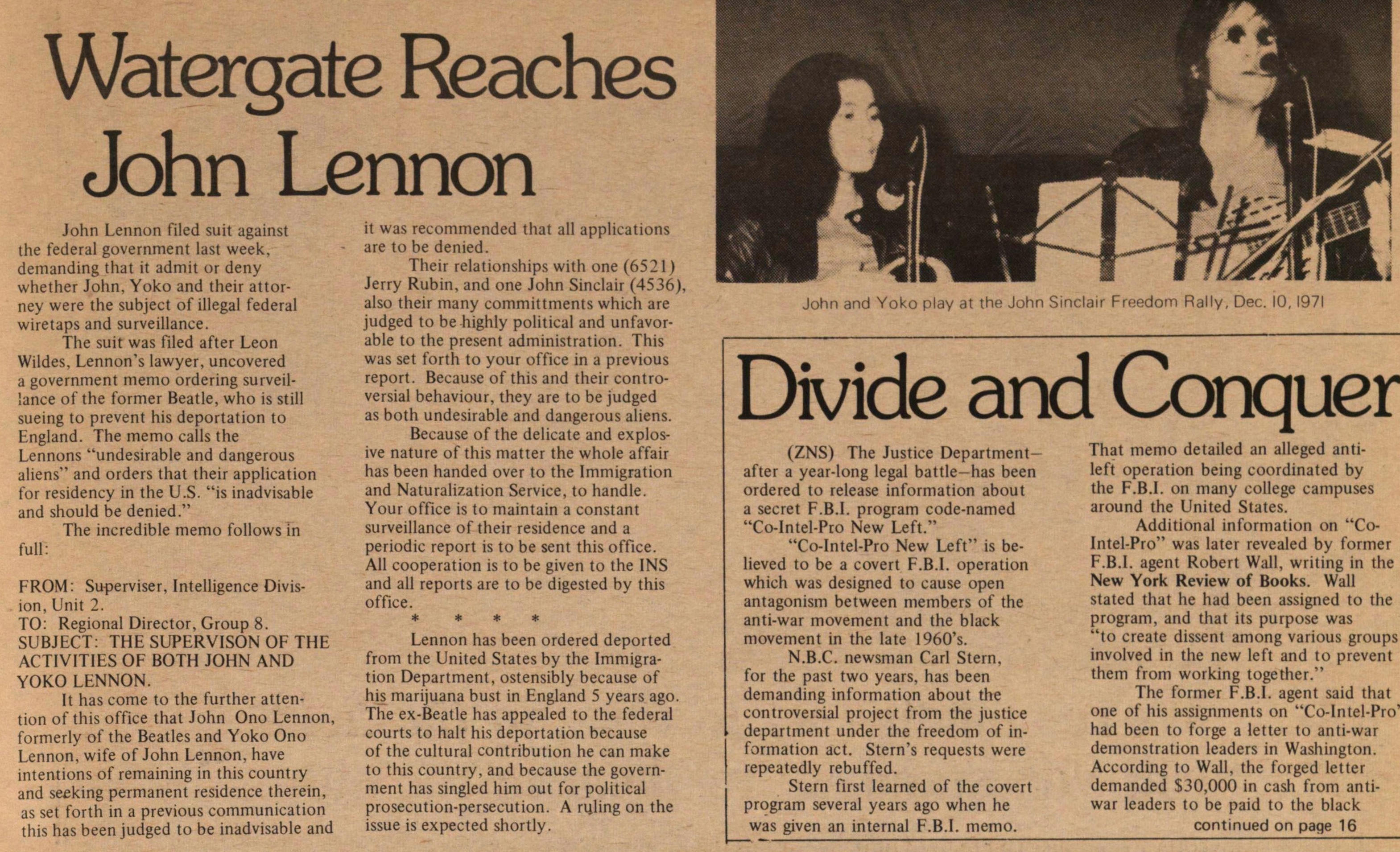 John Lennon filed suit against the federal government last week, demanding that it admit or deny whether John. Yoko and their attorney were the subject of illegal federal wiretaps and surveillance.

The suit was filed after Leon Wildes, Lennon's lawyer, uncovered a government memo ordering surveillance of the former Beatle, who is still sueing to prevent his deportation to England. The memo calls the Lennons "undesirable and dangerous aliens" and orders that their application for residency in the U.S. "is inadvisable and should be denied."

The incredible memo follows in full:

FROM: Superviser, Intelligence División, Unit 2.
TO: Regional Director, Group 8.
SUBJECT: THE SUPERVISON OF THE ACTIVITIES OF BOTH JOHN AND YOKO LENNON. I

t has come to the further attention of this office that John Ono Lennon, formerly of the Beatles and Yoko Ono Lennon, wife of John Lennon, have intentions of remaining in this country and seeking permanent residence therein, as set forth in a previous communication this has been judged to be inadvisable and it was recommended that all applications are to be denied.

Their relationships with one (6521)) Jerry Rubin, and one John Sinclair (4536), also their many commitments which are judged to be highly political and unfavorable to the present administration. This was set forth to your office in a previous report. Because of this and their controversial behaviour, they are to be judged as both undesirable and dangerous aliens.

Because of the delicate and explosive nature of this matter the whole affair has been handed over to the Immigration and Naturalization Service, to handle. Your office is to maintain a constant surveillance of their residence and a periodic report is to be sent this office. All cooperation is to be given to the INS and all reports are to be digested by this office.

Lennon has been ordered deported from the United States by the Immigration Department, ostensibly because of his marijuana bust in England 5 years ago. The ex-Beatle has appealed to the federal courts to halt his deportation because of the cultural contribution he can make to this country, and because the government has singled him out for political prosecution-persecution. A ruling on the issue is expected shortly.