Russell Means "we're After Our Heritage." 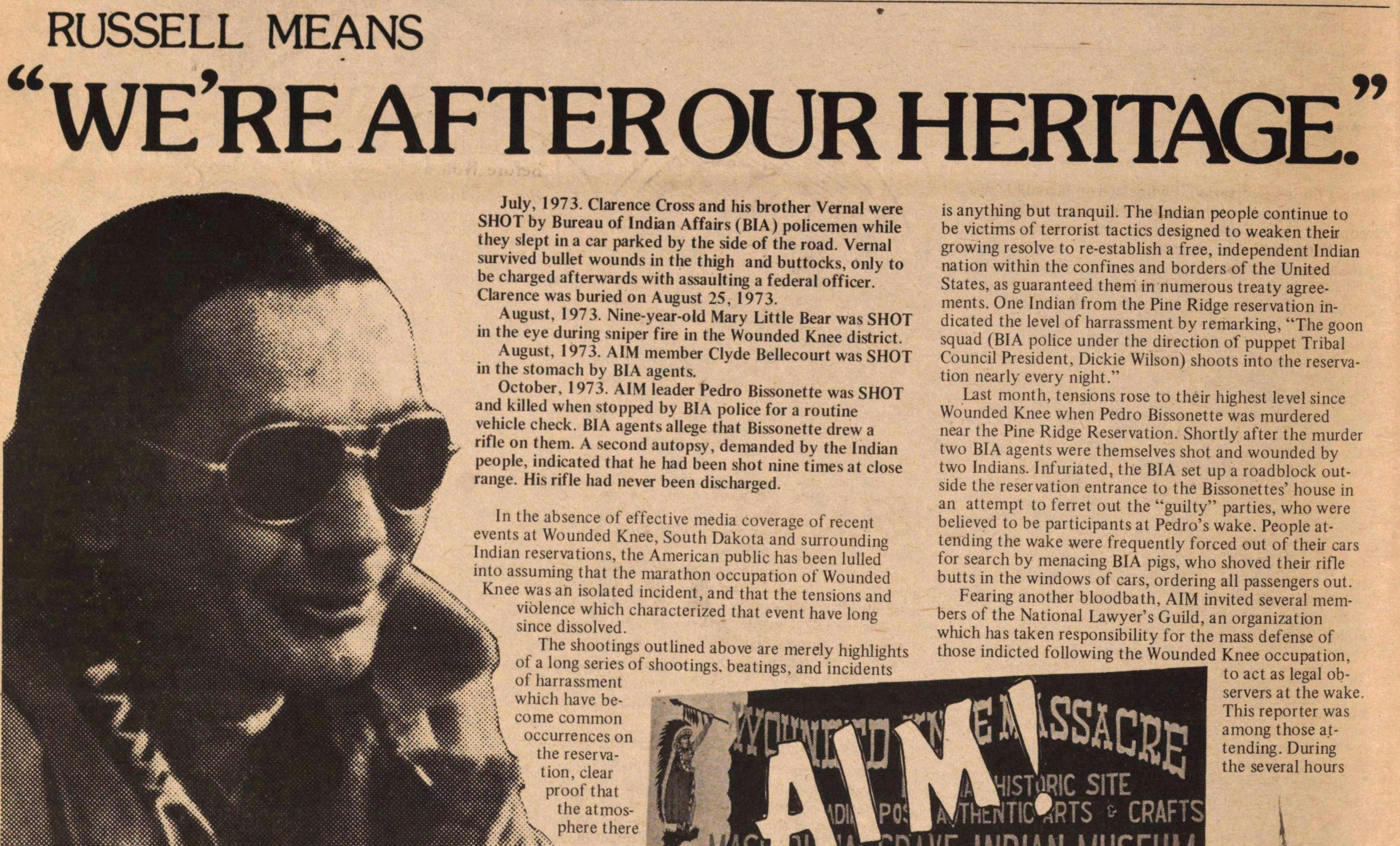 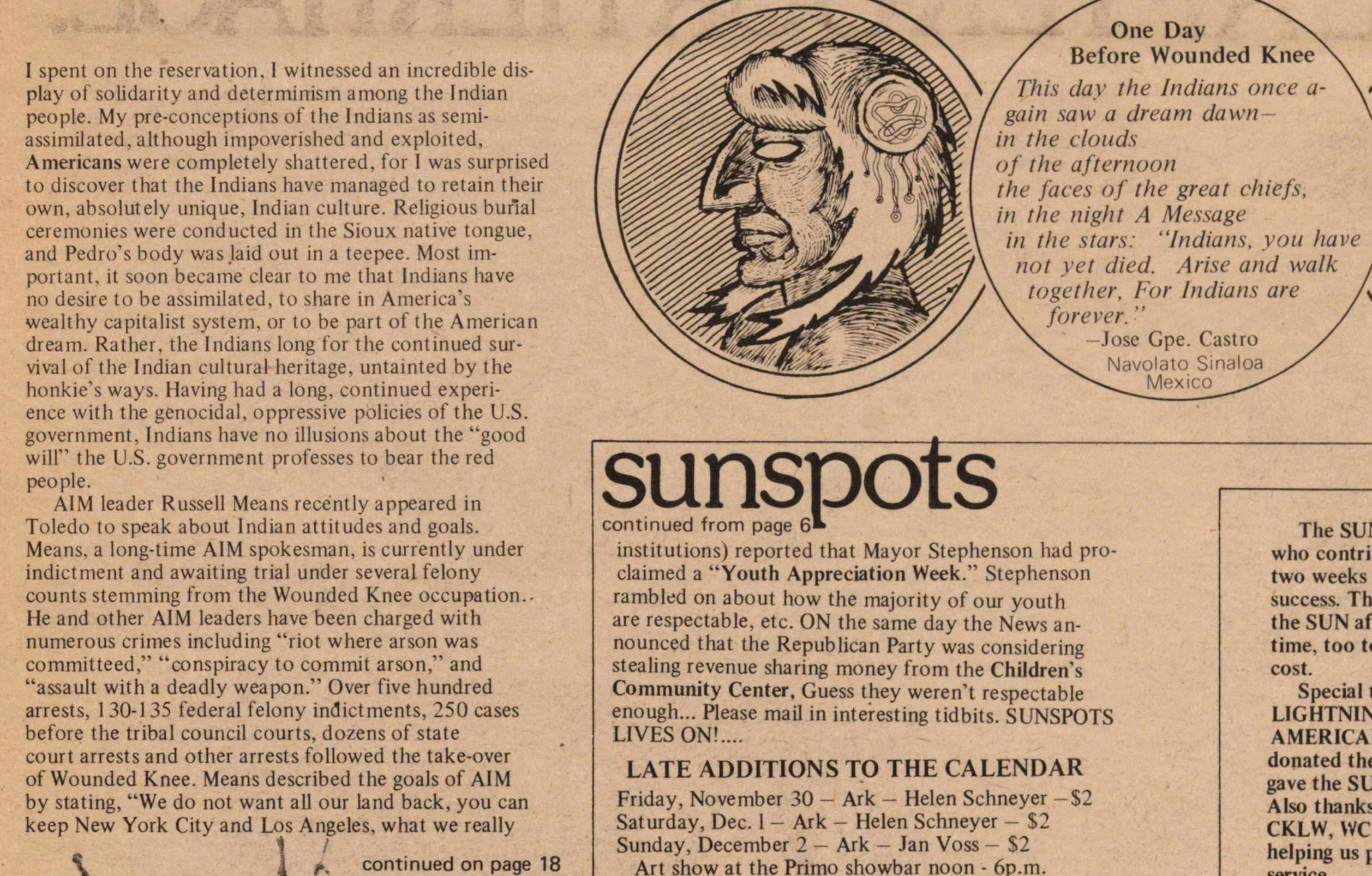 July, 1973. Clarence Cross and his brother Vernal were SHOT by Bureau of Indian Affairs (BIA) policemen while they slept in a car parked by the side of the road. Vernal survived bullet wounds n the thigh and buttocks, only to be charged afterwards with assaulting a federal officer. Clarence was buried on August 25, 1973. August, f973. Nine-year-old Mary Little Bear was SHOT in the eye during sniper fire in the Wounded Knee district. August, 1973. A1M member Clyde Bellecourt was SHOT in the stomach by BIA agents. October, 1973. AIM leader Pedro Bissonette was SHOT and killed when stopped by BIA pólice for a routine vehicle check. BIA agents allege tliat Bissonette drew a rifle on them. A second autopsy, demanded by the Indian people, indicated that he had been shot nine times at close range. His rifle had never been discharged. In the absence of effective media coverage of recent events at Wounded Knee, South Dakota and surrounding Indian reservations, the American public has been lulled into assuming that the marathon occupation of Wounded Knee was an isolated incident, and that the tensions and viblence which characterized that event have long since dissolved. The shootings outlined above are merely highlights of a long series of shootings. beatings, and incidents oí harrassment which have become common occurrences on the reservation, clear proof that the atmosphere there is anytlúng but tranquil. The Indian people continue to be victims of terrorist tactics designed to weaken their growing resolve to re-establish a free, independent Indian nation within the confines and borders of the United States, as guaranteed them in numerous treaty agreements. One Indian from the Pine Ridge reservation indicated the level of harrassment by remarking, "The goon squad (BIA pólice under the direction of puppet Tribal Council President, Dickie Wilson) shoots into the reservation nearly every night." Last month, tensions rose to their highest level since Wounded Knee when Pedro Bissonette was murdered near the Pine Ridge Reservation. Shortly after the murder two BIA agents were themselves shot and wounded by two Indians. Infuriated, the BIA set up a roadblock outside the reservation entrance to the Bissonettes' house in an attempt to ferret out the "guilty" parties, who were believed to be participants at Pedro's wake. People attending the wake were frequently forced out of their cars for search by menacing BIA pigs, who shoved their rifle butts in the Windows of cars, ordering all passengers out. Fearing another bbodbath, AIM invited several members of the National Lawyer's Guild, an organization which has taken responsibility for the mass defense of those indicted following the Wounded Knee occupation, to act as legal observers at the wake. This reporter was among those a.ttending. During the several hours I spent on the reservation, I witnessed an incredible display of solidarity and determinism among the Indian people. My pre-conceptions of the Indians as semiassimilated,although impoverished and exploited, Americanswere completely shattered, for I was surprised to discover that the Indians have managed to retain their own, absolutely unique, Indian culture. Religious bunal ceremonies were conducted in the Sioux native tongue, and Pedro's body was Jaid out in a teepee. Most important, it soon became clear to me that Indians have no desire to be assimilated, to share in America's wealthy capitalist system, or to be part of the American dream. Rather, the Indians long for the continued survival of the Indian cultural heritage, untainted by the honkie's ways. Having had a long, continued experience with the genocidal, oppressive policies of the U.S. government, Indians have no illusions about the "good will" the U.S. government professes to bear the red people. AIM leader Russell Means recéntly appeared in Toledo to speak about Indian attitudes and goals. Means, a long-time AIM spokesman, is currently under indictment and awaiting trial under several felony counts stemming from the Wounded Knee occupation.He and other AIM leaders have been charged with numerous crimes including "riot where arson was committeed," "conspiracy to commit arson," and "assault with a deadly weapon." Over five hundred arrests, 1 30-1 35 federal felony indictments, 250 cases before the tribal council courts, dozens of state court arrests and other arrests followed the take-over of Wounded Knee. Means described the goals of AIM by stating, "We do not want all our land back, you can keep New York City and Los Angeles, what we really continued on page 18 yS One Day x. Bef ore Wounded Knee 77.V day the liulians once - f gain saw a dream dawn in the clouds of the aftenwon the faces of the great chiefs, in the n i glit A Message in the stars: "Indians, you have K not yet died. Alise and walk ' together. Fot Indians are Á f ore ver. " v -José Gpe. Castro v. Navolato Sinaloa v