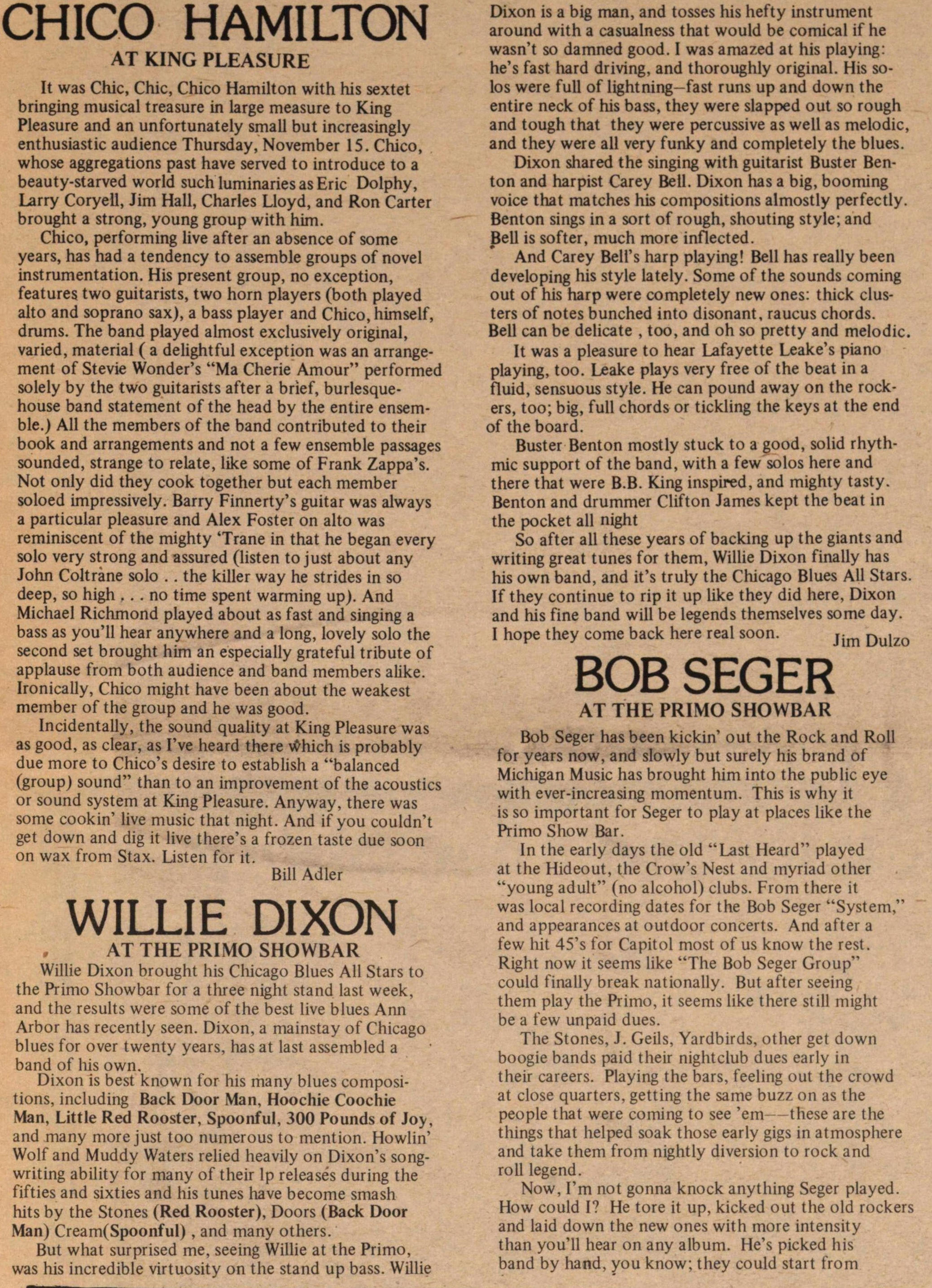 Willie Dixon brought his Cliicago Blues All Stars to the Primo Showbar for a three night stand last week, and the results were some of the best live blues Ann Arbor has recently seen. Dixon, a mainstay of Chicago blues for over twenty years, has at last assembled a band of his own. Dixon is best known for his many blues compositions, including Back Door Man, Hoochie Coochie Man, Little Red Rooster, Spoonfu!, 300 Pounds of Joy, and many more just too numerous to mention. Howlin' Wolf and Muddy Waters relied heavily on Dixon's songwriting ability for many of their lp releases during the fifties and sixties and his tunes have become smash hits by the Stones (Red Rooster), Doors (Back Door Man) Cream(Spoonful) , and many others. But what surprised me, seeing Willie at the Primo, was his incredible virtuosity on the stand up bass. Willie Dixon is a big man, and tosses his hefty instrument around with a casualness that would be comical if he wasn't so damned good. I was amazed at his playing: he's fast hard driving, and thoroughly original. His solos were full of lightning- fast runs up and down the entire neck of his bass, they were slapped out so rough and tough that they were percussive as well as melodie, and they were all very funky and completely the blues. Dixon shared the singing with guitarist Buster Benton and harpist Carey Bell. Dixon has a big, booming voice that matches his compositions almostly perfectly. Benton sings in a sort of rough, shouting style; and Bell is softer, much more inflected. And Carey Bell's harp playing! Bell has really been developing his style lately. Some of the sounds coming out of his harp were completely new ones: thick clusters of notes bunched into disonant, raucus chords. Bell can be delicate , too, and oh so pretty and melodie. It was a pleasure to hear Lafayette Leake's piano playing, too. Leake plays very free of the beat in a fluid, sensuous style. He can pound away on the rockers, too; big, full chords or tickling the keys at the end of the board. Buster Benton mostly stuck to a good, solid rhythmic support of the band, with a few solos here and there that were B.B. King inspired, and mighty tasty. Benton and drummer Clifton James kept the beat in the pocket all night So after all these years of backing up the giants and writing great tunes for them, Willie Dixon finally has his own band, and it's trufy the Chicago Blues All Stars. If they continue to rip it up like they did here, Dixon and his fine band will be legends themselves some day. I hope they come back here real soon.