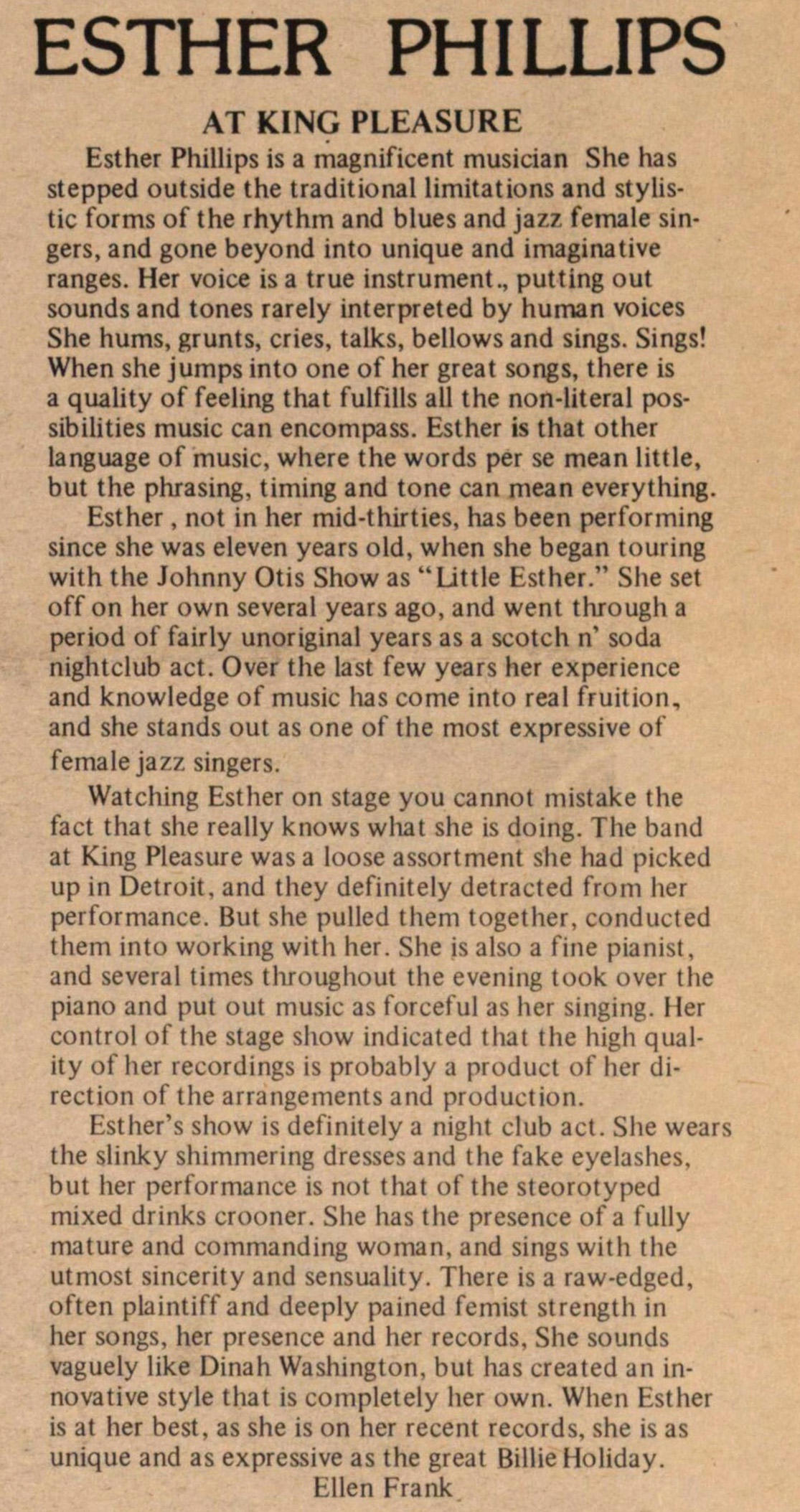 Esther Phillips is a magnificent musician.She has stepped outside the traditional limitations and stylistic forms of the rhythm and blues and jazz female singers, and gone beyond into unique and imaginative ranges. Her voice is a true instrument, putting out sounds and tones rarely interpreted by human voices. She hums, grunts, cries, talks, bellows and sings. Sings!
When she jumps into one of her great songs, there is a quality of feeling that fulfills all the non-literal possibilities music can encompass. Esther is that other language of music, where the words per se mean little, but the phrasing, timing and tone can mean everything.
Esther, not in her mid-thirties, has been performing since she was eleven years old, when she began touring with the Johnny Otis Show as "Little Esther." She set off on her own several years ago, and went through a period of fairly unoriginal years as a scotch n' soda nightclub act. Over the last few years her experience and knowledge of music lias come into real fruition, and she stands out as one of the most expressive of female jazz singers.

Watching Esther on stage you cannot mistake the fact that she really knows what she is doing. The band at King Pleasure was a loóse assortment she had picked up in Detroit, and they definitely detracted from her performance. But she pulled them together, conducted them into working with her. She is also a fine pianist, and several times throughout the evening took over the piano and put out music as forceful as her singing. Her control of the stage show indicated that the high quality of her recordings is probably a product of her direction of the arrangements and production.
Esther's show is definitely a nightclub act. She wears the slinky shimmering dresses and the fake eyelashes, but her performance is not that of the stereotyped mixed drinks crooner. She lias the presence of a fully mature and commanding woman, and sings with the utmost sincerity and sensuality. There is a raw-edged, often plaintiff and deeply pained feminist strength in her songs, her presence and her records, She sounds vaguely like Dinah Washington, but has created an innovative style that is completely her own. When Esther is at her best, as she is on her recent records, she is as unique and as expressive as the great Billie Holiday.