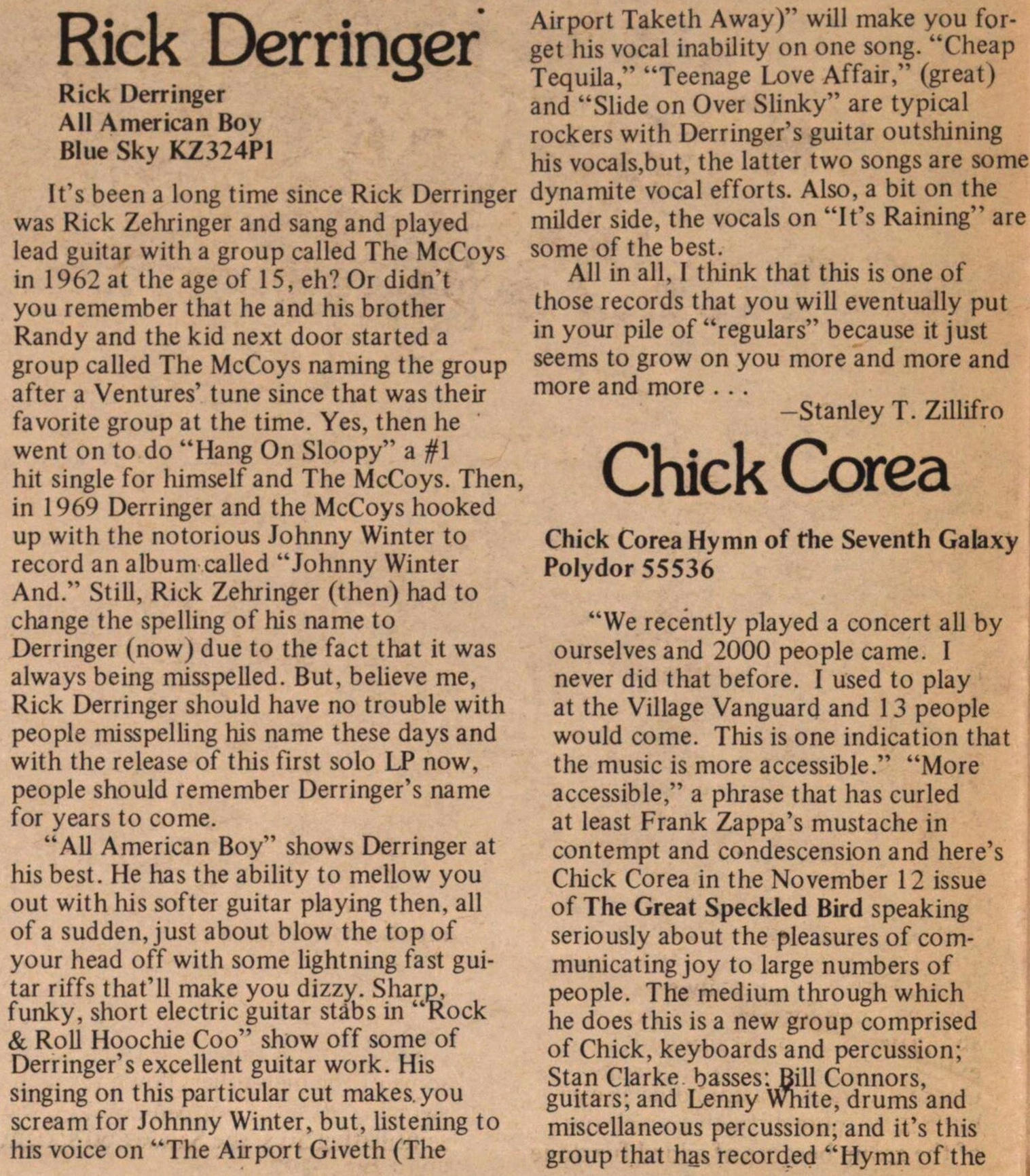 Riek Derringer All American Boy Blue Sky KZ324P1 It's been a long time since Riek Derringer was Riek Zehringer and sang and played lead guitar with a group called The McCoys in 1 962 at the age of 1 5 , eh? Or didn't you remember that he and his brother Randy and the kid next door started a group called The McCoys naming the group after a Ventures' tune since that was their favorite group at the time. Yes, then he went on to do "Hang On Sloopy" a #1 hit single for himself and The McCoys. Then, in 1969 Derringer and the McCoys hooked up with the notorious Johnny Winter to record an album called "Johnny Winter And." Still, Riek Zehringer (then) had to change the spelling of his name to Derringer (now) due to the fact that it was always being misspelled. But, believe me, Riek Derringer should have no trouble with people misspelling his name these days and with the release of this first solo LP now, people should remember Derringer's name for years to come. "All American Boy" shows Derringer at his best. He has the ability to mellow you out with his softer guitar playing then, all of a sudden, just about blow the top of your head off with some lightning fast guitar riffs that'll make you dizzy. Sharp, funky, short electric guitar stabs in "Rock & Rqll Hoochie Coo" show off some of Derringer's excellent guitar work. His singing on this particular cut makes.you scream for Johnny Winter, but, listening to his voice on "The Airport Giveth (The Airport Taketh Away)" will make you forget his vocal inability on one song. "Cheap Tequila," "Teenage Love Affair," (great) and "Slide on Over Slinky" are typical rockers with Derringer's guitar outshining his vocals,but, the latter two songs are some dynamite vocal efforts. Also, a bit on the milder side, the vocals on "It's Raining" are some of the best. All in all, I tliink that this is one of those records that you will eventually put in your pile of "regulars" because it just seems to grow on you more and more and more and more . . .