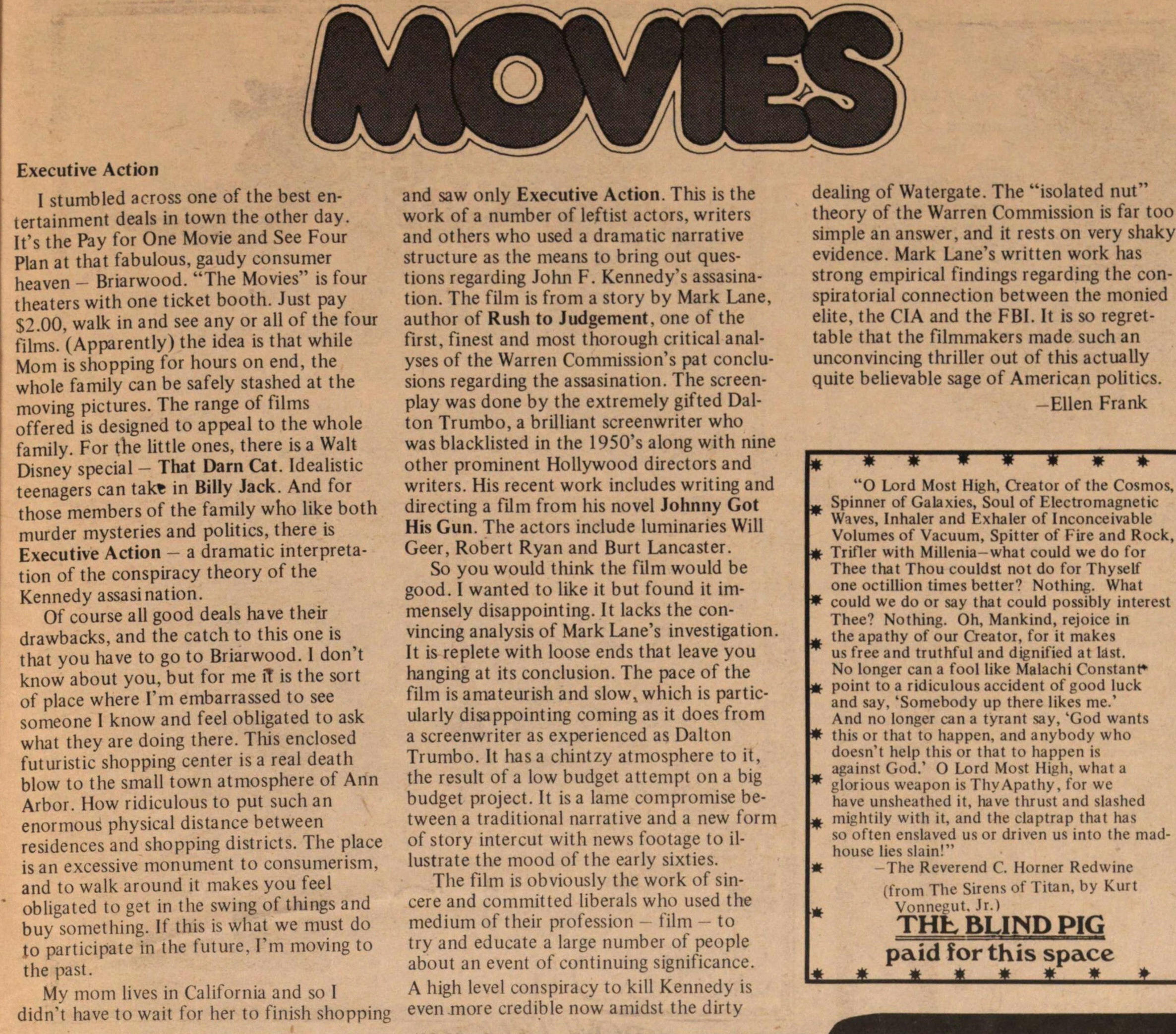 I stumbled across one of the best entertainment deals in town the other day. It's the Pay for One Movie and See Four Plan at that fabulous, gaudy consumer heaven - Briarwood. "The Movies" is four theaters with one ticket booth. Just pay S2.00, walk in and see any or all of the four films. (Apparently) the idea is that while J Mom is shopping for hours on end, the whole family can be safely stashed at the moving pictures. The range of films offered is designed to appeal to the whole family. For the little ones, there is a Walt Disney special - That Dam Cat. Idealistic teenagers can takt in Billy Jack. And for those members of the family who like both murder mysteries and politics, there is Executive Action - a dramatic interpretation of the conspiracy theory of the Kennedy assasination. Of course all good deals have their drawbacks, and the catch to this one is that you have to go to Briarwood. I don't know about you, but for me it is the sort of place where I'm embarrassed to see someone I know and feel obligated to ask what they are doing there. This enclosed futuristic shopping center is a real death blow to the small town atmosphere of Ann Arbor. How ridiculous to put such an enormous physical distance between residences and shopping districts. The place isan excessive monument to consumerism, and to walk around it makes you feel ' obligated to get in the swing of things and buy something. If this is what we must do to particípate in the future, I'm moving to the past. My mom lives in California and so I didn't have to wait for her to finish shopping and saw only Executive Action. This is the work of a number of leftist actors, writers and others who used a dramatic narrative structure as the means to bring out questions regarding John F. Kennedy' s assasination. The film is from a story by Mark Lane, author of Rush to Judgement. one of the first, finest and most thorough critical analyses of the Warren Commission's pat conclusions regarding the assasination. The screenplay was done by the extremely gifted Dalton Trumbo, a brilliant screenwriter who was blacklisted in the 1950's along with nine other prominent Hollywood directors and writers. His recent work includes writing and directing a film from his novel Johnny Got His Gun. The actors include luminaries Will Geer, Robert Ryan and Burt Lancaster. So you would think the film would be good. I wanted to like it but found it immensely disappointing. It lacks the convincing analysis of Mark Lane's investigation. It is replete with loóse ends that leave you hanging at its conclusión. The pace of the film is amateurish and slow, which is particularly disappointing coming as it does from a screenwriter as experienced as Dalton Trumbo. It has a chintzy atmosphere to it, the result of a low budget attempt on a big budget project. It isa lame compromise between a traditional narrative and a new form of story intercut with news footage to illustrate the mood of the early sixties. The film is obviously the work of sincere and committed liberáis who used the medium of their profession - film - to try and edúcate a large number of people about an event of continuing significance. A high level conspiracy to kill Kennedy is even more credible now amidst the dirty dealing of Watergate. The "isolated nut" theory of the Warren Commission is far too simple an answer, and it rests on very shaky evidence. Mark Lane's written work has strong empirical findings regarding the conspiratorial connection between the monied elite, the CIA and the FBI. It is so regrettable that the filmmakers made such an unconvincing thriller out of this actually quite believable sage of American politics.