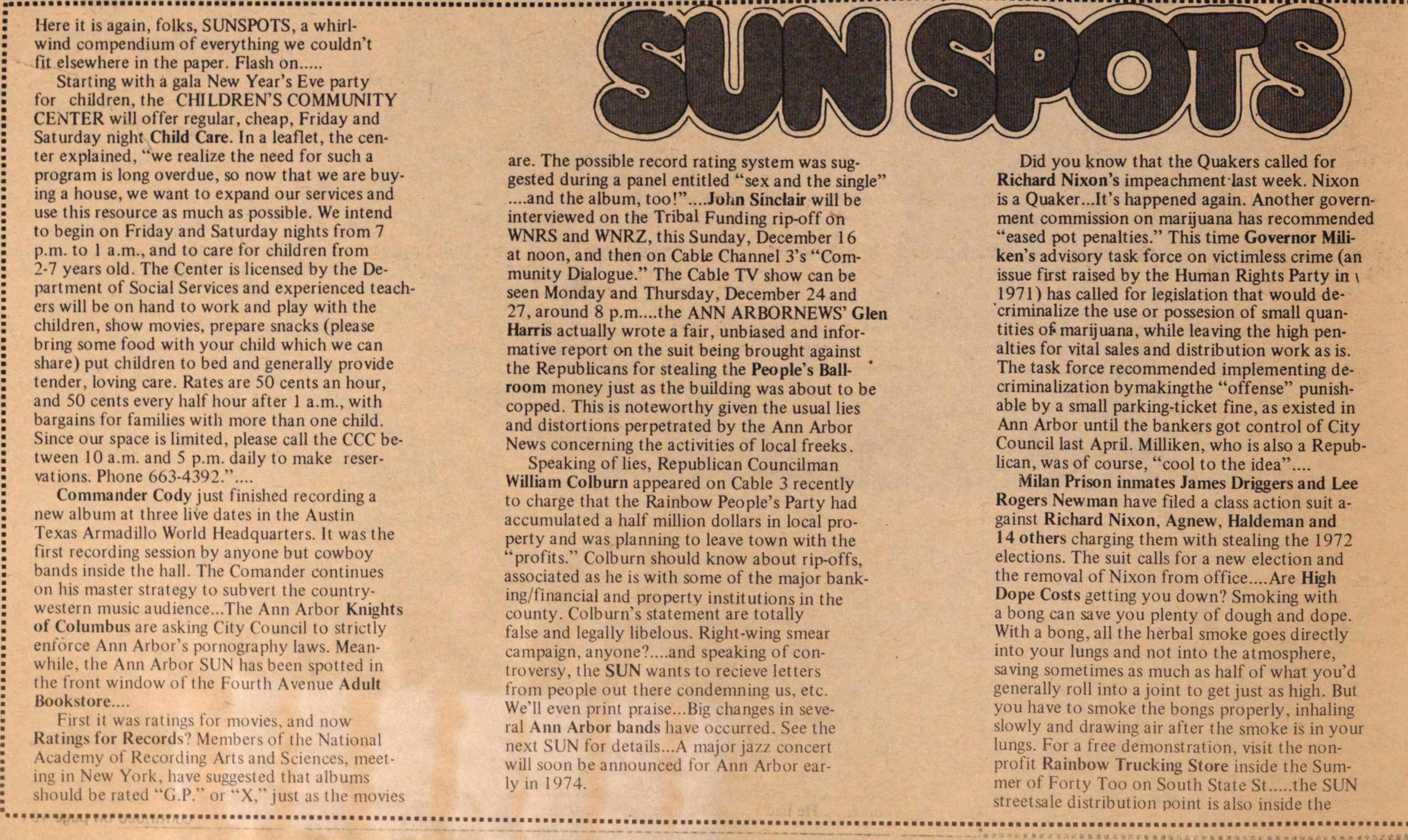 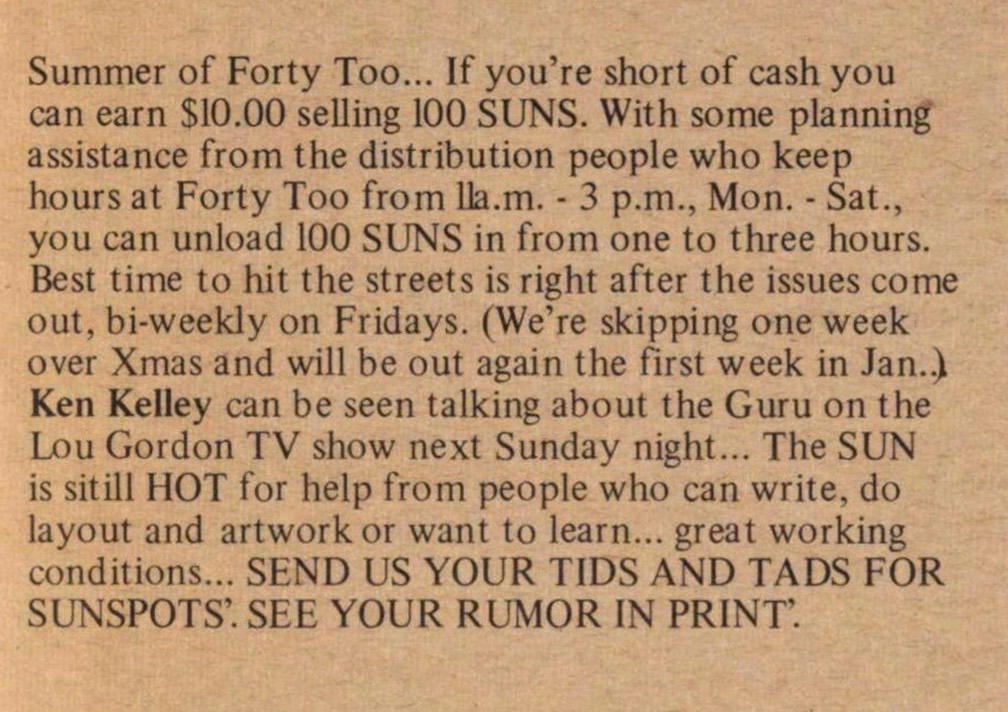 ■■■■■■■■■■■■■■■■■■■■■■■■■■■■■■■■■■■■a j Mere it s again, folks, SUNSPOTS, a whirlwind compendium of everything we couldn't ■ fit elsewhere in the paper. Flash on Start ing witli a gala New Year's Eve party I for chüdren, the CHILDREN'S COMMUNITY CENTER will offer regular, cheap, Friday and : Saturday night Child Care. In a leaflet, the cen ter explained, "we realize the need for such a ; program is long overdue, so now tliat we are buy ing a house, we want to expand our services and use this resource as much as possible. We intend ; to begin on Friday and Saturday nights from 7 I p.m. to 1 a.m., and to care for children from ■ 2-7 years old. The Center is licensed by the Deï partment of Social Services and experienced teach■ ers will be on hand to work and play with the ; children, show movies, prepare snacks (please : bring some food with your child which we can share) put children to bed and generally provide ; tender, loving care. Rates are 50 cents an hour, : and 50 cents every half hour after 1 a.m., with bargains for families with more than one child. ; Since our space is limited, please cali the CCC be! tween 10 a.m. and 5 p.m. daily to make reser vations. Phone 663-4392.".... Commander Cody just finished recordinga I new album at three live dates in the Austin Texas Armadillo World Headquarters. It was the ; first recording session by anyone but cowboy ; bands inside the hall. The Comander continúes ■ on his master strategy to subvert the country; western music audience...The Ann Arbor Knights I of Coiumbus are asking City CouncJl lo strictly I enforce Ann Arbor's pornography laws. Mean while. the Ann Arbor SUN has been spotted in ; the front windowofthe Fourth Avenue Adult I Bookstore.... First it was ratings lor movies, and now ■ Ratins for Records? Members of the National : Academy of Recording Arts and Sciences, meetj ing in New York. have suggested t ha t albums ; should be ra led "G.P." Oi "X," USt as the movies are. The possible record rating system was suggested during a panel entitled "sex and the single" ....and the album, too!"....John Sinclair will be interviewed on the Tribal Funding rip-off on WNRS and WNRZ, this Sunday, December 1 6 at noon, and then on Cable Channel 3's "Community Dialogue." The Cable TV show can be seen Monday and Thursday, December 24 and 27, around 8 p.m....the ANN ARBORNEWS' Glen Marris actually wrote a fair, unbiased and informative report on the suit being brought against the Republicans for stealing the People's Ballroom money just as the building was about to be copped. This is noteworthy given the usual lies and distortions perpetrated by the Ann Arbor News concerning the activities of local freeks. Speaking of lies, Republican Councilman William Colburn appeared on Cable 3 recently to charge that the Rainbow People's Party had accumulated a half million dollars in local property and was planning to leave town with the "profits." Colburn should know about rip-offs, associated as he is with some of the major bankingfinancial and property institutions in the county. Colburn' s statement are totally false and legally libelous. Right-wing smear campaign, anyone?....and speaking of controversy, t he SUN wants to recieve letters from peo pi e out there condemning us, etc. We'll even print praisc.Big changes in several Ann Arbor bands have occurred. See the next SUN for details... A major ja. concert will soon be announced for Ann Arbor early in 1974. ■ ■ i Did you know that the Quakers called for Richard Nixon's impeachmentlast week. Nixon is a Quaker. ..It's happened again. Another government commission on marijuana has recommended "eased pot penalties." This time Governor Miliken's advisory task force on victimless crime (an issue first raised by the Human Rights Party in 1971) has called for legislation that would de'criminalize the use or possesion of small quantities of marijuana, while leaving the high penalties for vital sales and distribution work as is. The task force recommended implementing decriminalization bymakingthe "offense" punishable by a small parking-ticket fine, as existed in Ann Arbor until the bankers got control of City Council last April. Milliken, who is also a Republican, was of course, "cool to the idea".... Milán Prison inmates James Driggers and Lee Rogers Newman have filed a class action suit against Richard Nixon, Agnew, Haldeman and 14 others charging them with stealing the 1972 elections. The suit calis for a new election and the removal of Nixon from office.... Are High Dope Costs getting you down? Smoking with a bong can save you plenty of dough and dope. With a bong, all the herbal smoke goes directly into your lungs and not into the atmosphere, sa ving spmetimes as much as half of what you'd generally roll into a joint to get just as high. But you have to smoke the bongs properly, inhaling slowly and drawing air aft er the smoke is in your lungs. For a free demonstration, visit the nonprofit Rainbow Trucking Store inside the Summer of Forty Too on South State St the SUN streetsale distribution point is also inside the ■■■■■■■■■■■■■■■■■■■■■■■■■■■■■■■■■■■■■■■■■■■■■■■■■■i Summer of Forty Too... If you're short of cash you can earn $10.00 selling 100 SUNS. With some planning assistance from the distribution people who keep hours at Forty Too from Ua.m. - 3 p.m., Mon. - Sat., you can unload 100 SUNS in from one to three hours. Best time to hit the streets is right after the issues come out, bi-weekly on Fridays. (We're skipping one week over Xmas and will be out again the first week in Jan..) Ken Kelley can be seen talking about the Guru on the Lou Gordon TV show next Sunday night... The SUN is sitill HOT for help from people who can write. do layout and artworkor want to learn... great working conditions... SEND US YOUR TIDS AND TADS FOR SUNSPOTS'. SEE YOUR RUMOR IN PRINT'.