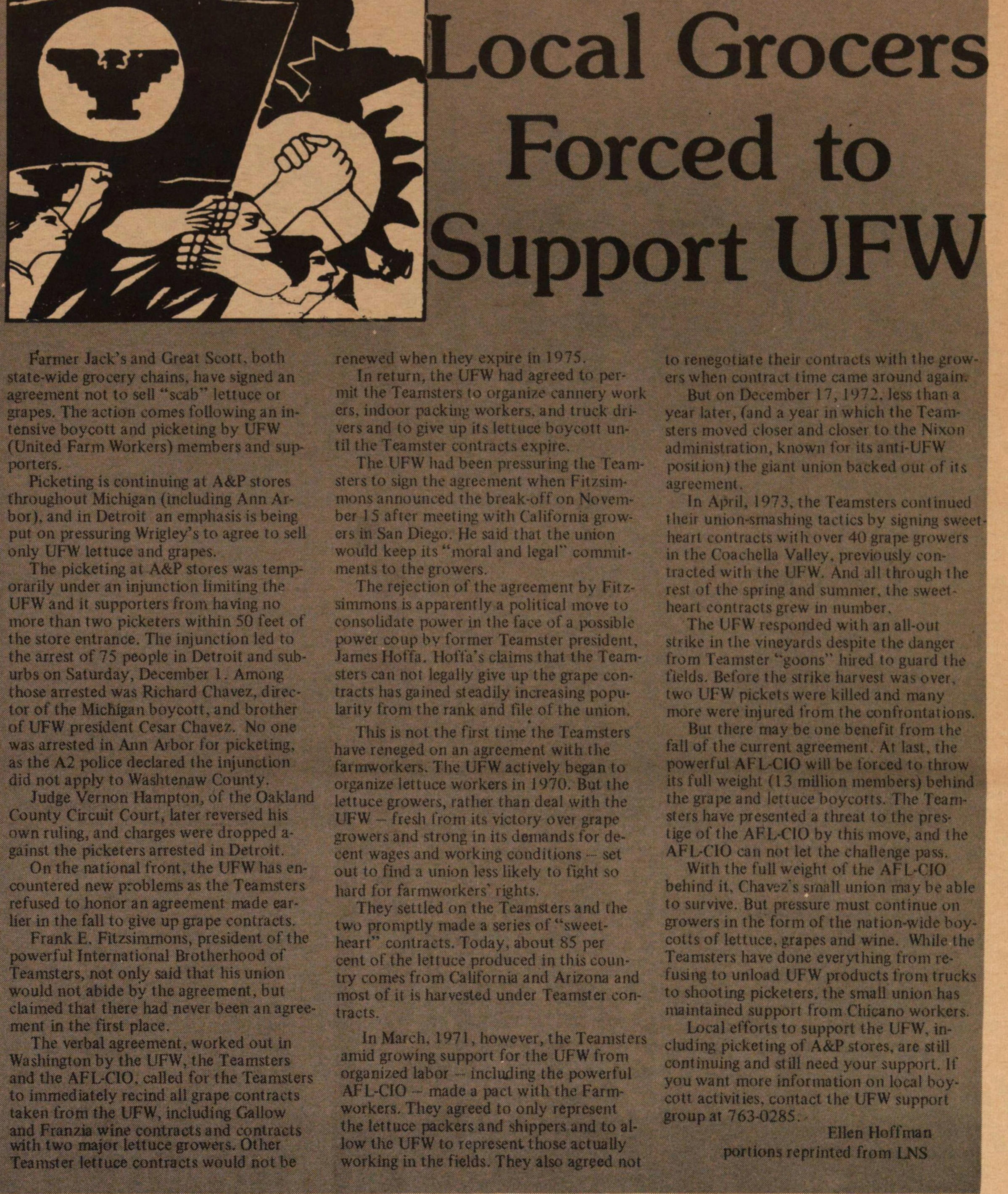 Farmer Jack's and üre.: ioth state-wide grocery chain an agreement not i ah" lettui grapes. The action comes foUowing an intensive boycott and picketing by UFW (United Farm Workers) members3nd supporters. Picketing is continuing at A&P stores Chroughout Michigan (including Ann Arbor), and in Detroit an ernphasis is tnput on pressuring Wrigley's ti only UFW lettuce and jp The picketing at A&P temporarily under an in june t ion Hmíüng tbr UFW and it supporters from ha ving no more than two picketers within 50 f eet of the store entrance. The injunction led to the arrest of 75 people in Detroit and suburbs on Saturday, December 1 . Among those arrested was Richard Chave, dn tor of the Michigan boycott, and bren her of UFW president Cesar Chave. No one was arrested in Ann Arbor foi picketing, as the A2 pólice rleclared the injunction did not apply to Waslitenaw County. Judge Vernon Hampton, of the Oakland County Circuit Court, later reversed hts own ruling, and charges were dropped against the picketers arrested in Detroit. On the national front, the UFW lias encountered new problems as the Teamsters refused to honor an agTeement made earlier in the fall to give up grape contracts. Frank E, Fitzsimmons, president of the powerfui International Brotherhood of Teamsters, not only said that his union would not abide by the agreement, but claimed that there had never been an agreement in the first place. The verbal agreement, worked out in Washington by the UFW, the Teamsters and the AFL-C1O, called for the Teamsters to imrnediately recind all grape contracts taken from the UFW, including Gallow and Franzia wíne contracts and contracts with two major lettuce growers. Other Teantster ieftuce contracts would not be renewed when they expire in 1" In return, the UFW had mit the Te crs, indooj vers and togive up unti! the Teamster con The UFW had bee ed the bre ber I wouki kee ments to the . The reje simmons isapparexitly a polilical move lidate power in the face üfa possible power coup b terpresident, lames Hoi thai the 1 carnean Rol legaiiy give up the grape congained steadily increasing popularity trom the rank and lile of the union. This is nut the first time the Teamsters have reneged on an agreement with the fai mworkers. The UFW actively began to organize iettuee vvorkers in 1 lJ70. But the lettuce growers, ral leal wíth the UFW i ei grape .or.s and strong in its demands tbr decent wages and working conditions set out to find a unión lcss likely !o fht so liard for farmwrkers' rights. They settled on the Teamsters and the two proniptly made a series of "sweetheart" cuntracts. Today 5 per ■i' the lettuce : mntry comes frorn California and Anima and most of it is harvested under Teamster contracts. in March. 1971 , however, the Teamsters amid gruwing support for the UFW fi organized labor induding the powerful AFL-CiO - rnade a pact with the Farmworkers. They agreed to only represent the lettuce packers and snippers and to alJow the UFW to represent those actually working in the fields. They also agreed not to renegmiate their contracts with the growhen contract time . fand a year in which th sters moved ciosei and ( he Nixon administration, knowi titi-UFW posükn) the giant union backed om of its pril. 1973, the leamsters continued nion-smashirtg tactics by signing sweetlican . with over 40 grape growers chella Valley. previo usly coned with the UFW. And all thruugh t he ummer, th eontractsgrew in number, The UFW responded with an all-oul strike in the vineyards despite the danger ■iistcr '"goons" hired to guard the the strike luirvest was over, W pickets were killed and many more wen.1 injured iVom th tations. But theie ma y be one benefit from the fall of the current agreetnent. At last, the powerful AFL-CIO wiil bc torced to rhrnw i uil weight ( 1 3 millioD members) behind the grapeand lettn canti have presented a threat to tige of the AFL-CIO by . the AFL-CIO can not let the ch With the fuil weight cl' the A behind it. Chav.s small union may In1 able to survive. But pressxire must continue on growers in the form of the nation-wide boycotts of Icttuce, grapes and wine. While the asters have done everything from reing to unload UFW products trom trucks to shooting picketers. the smail union has maintained support from Chicano workers. Local efforts to support the UFW, including picketing of A&P stores, are still continuingand stiil need your support. If you want more tnformation on louil boycott activities. contact the UFW suprirt groupat 763 portions reprinted from LNS