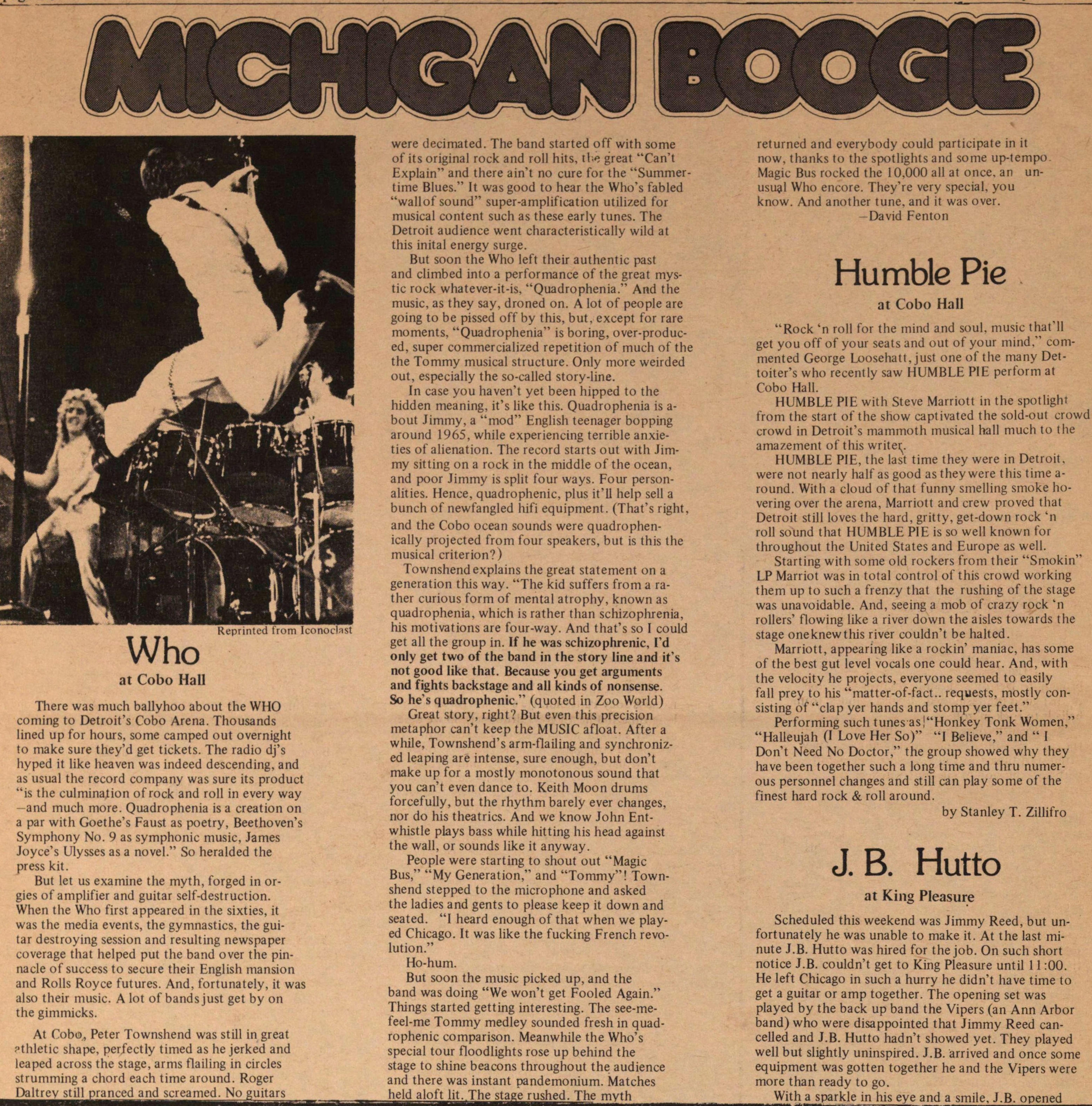 Reprinted from Iconoclast There was much ballyhoo about the WHO coming to Detroit's Cobo Arena. Thousands lined up for hours, some camped out overnight to make sure they'd get tickets. The radio dj's hyped it like heaven was indeed descending, and as usual the record company was sure its product "is the culminaiion of rock and roll in every way -and much more. Quadrophenia is a creation on a par with Goethe's Faust as poetry, Beethovend Symphony No. 9 as symphonic music, James Joyce's Ulysses as a novel." So heralded the press kit. But let us examine the myth, forged in orgies of amplifier and guitar self-destruction. When the Who first appeared in the sixties, it was the media events, the gymnastics, the guitar destroying session and resulting newspaper coverage that helped put the band over the pinnacle of success to secure their English mansion and Rolls Royce futures. And, fortunately, it was also their music. A lot of bands just get by on the gimmicks. At Cobo., Peter Townshend was still in great ?thletic shape, perfectly timed as he jerked and leaped across the stage, arms flailing in circles strumming a chord each time around. Roger Daltrev still pranced and screamed. No guitars were decimated. The band started off with some of its original rock and roll hits, tUe great "Can't Explain" and there ain't no cure for the "Summertime Blues." It was good to hear the Who's fabled "wallof sound" super-amplification utilized for musical content such as these early tunes. The Detroit audience went characteristically wild at this inital energy surge. But soon the Who left their authentic past and climbed into a performance of the great mystic rock whatever-it-is, "Quadrophenia." And the music, as they say, droned on. A lot of people are going to be pissed off by this, but, except for rare moments, "Quadrophenia" is boring, over-produced, super commercialized repetition of much of the the Tommy musical structure. Only more weirded out, especially the so-called story-line. In case you haven't yet been hipped to the hidden meaning, it's like this. Quadrophenia is about Jimmy, a "mod" English teenager bopping around 1965, while experiencing terrible anxieties of alienation. The record starts out with Jimmy sitting on a rock in the middle of the ocean, and poor Jimmy is split four ways. Four personalities. Henee, quadrophenic, plus it'll help sell a bunch of newfangled hifi equipment. (That's right, and the Cobo ocean sounds were quadrophenically projected from four speakers, but is this the musical criterion?) Townshendexplains the great statement on a generation this way. "The kid suffers from a rather curious form of mental atrophy, known as quadrophenia, which is rather than schizophrenia, his motivations are four-way. And that's so I could get all the group in. If he was schizophrenic, l'd only get two of the band in the story line and it's not good like that. Because you get arguments and fights backstage and all kinds of nonsense. So he's quadrophenic." (quoted in Zoo World) Great story, right? But even this precisión metaphor can't keep the MUSIC afloat. After a while, Townshend's arm-flailing and synchronized leaping are intense, sure enough, but don't make up for a mostly monotonous sound that you can't even dance to. Keith Moon drums forcefully, but the rhythm barely ever changes, nor do his theatrics. And we know John Entwhistle plays bass while hitting his head against the wall, or sounds like it anyway. People were starting to shout out "Magie Bus," "My Generation," and "Tommy"! Townshend stepped to the microphone and asked the ladies and gents to please keep it down and seated. "I heard enough of that when we played Chicago. It was like the fucking French revolution." Ho-hum. But soon the music picked up, and the band was doing "We won't get Fooled Again." Things started getting interesting. The see-mefeel-me Tommy medley sounded fresh in quadrophenic comparison. Meanwhile the Who's special tour floodlights rose up behind the stage to shine beacons throughout the audience and there was instant pandemonium. Matches held aloft lit.The stage rushed. The myth returned and everybody could particípate in it now, thanks to the spotlightsand some up-tempo. Magie Bus rocked the 10,000 all at once, an unusual Who encoré. They're very special, you know. And another tune, and it was over.