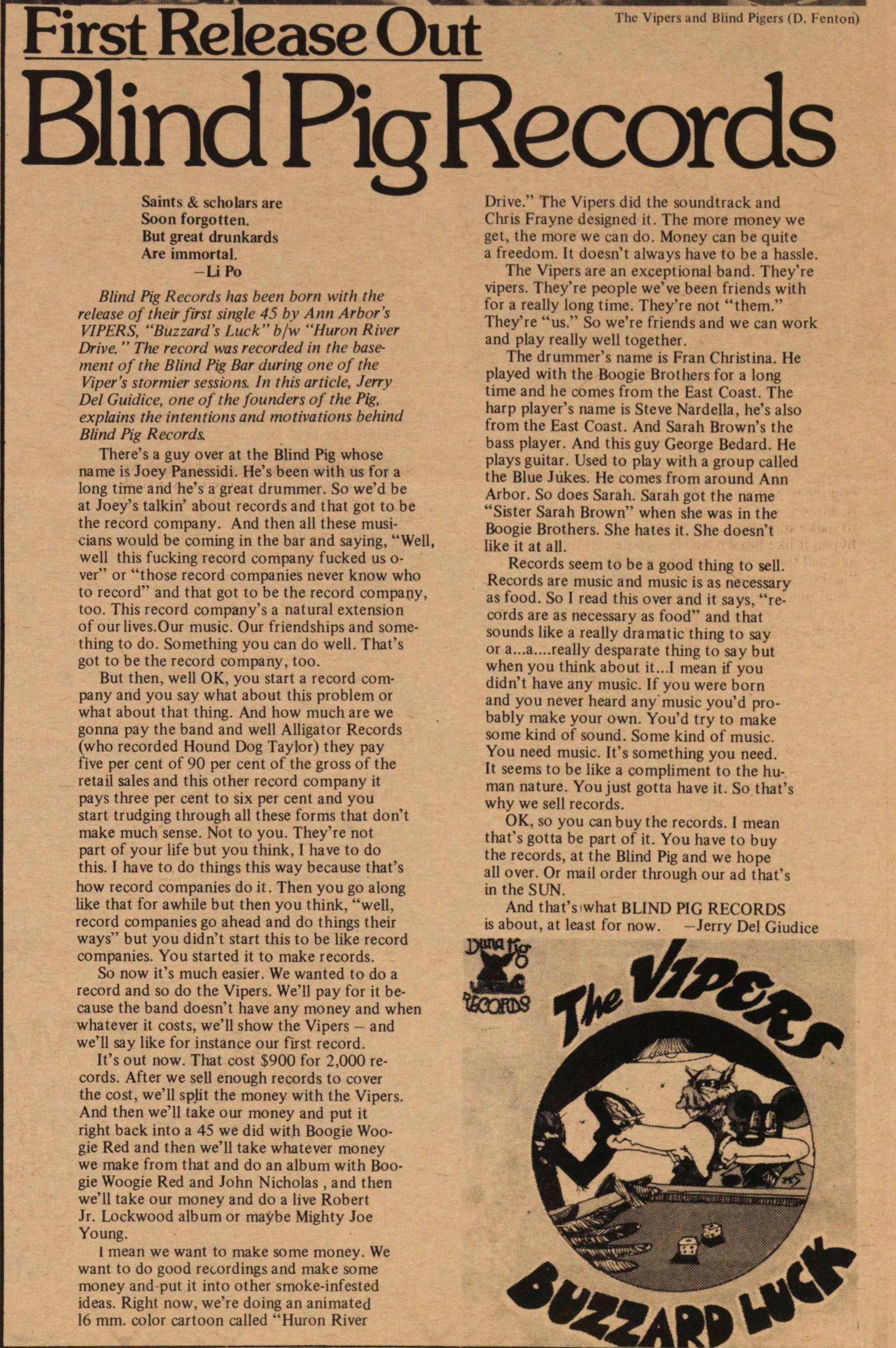 Saints & scholars are Soon forgotten. But great drunkards Are immortal. -Li Po Blind Pig Records has been bom with the release of their first single 45 bv Ann Arbor's VIPERS, "Buzzard's Luck" bw "Huron River Drive. " The record was recorded in the basement of the Blind Pig Bar during onc of the Viper's stormier sessions. In this art iele, Jerry Del Guidice, one of the founders of the Pig, explains the intentions and motivations behind Blind Pig Records. There's a guy over at the Blind Pig whose name is Joey Panessidi. He's been with us for a long time and he's a great drummer. So we'd be at Joey's talkin' about records and that got to be the record company. And then all these musicians would be coming in the bar and saying, "Wel!, well this fucking record company fucked us over" or "those record companies never know who to record" and that got to be the record company, too. This record company's a natural extensión of ourlives.Our music. Our friendships and something to do. Something you can do well. That's got to be the record company, too. But then, well OK, you start a record company and you say what about this problem or what about that thing. And how much are we gonna pay the band and well Alligator Records (who recorded Hound Dog Taylor) they pay five per cent of 90 per cent of the gross of the retail sales and this other record company it pays three per cent to six per cent and you start trudging through all these forms that don't make much sense. Not to you. They're not part of your life but you think, I have to do this. I have to do things this way because that's how record companies do it. Then you go along like that for awhile but then you think, "well, record companies go ahead and do things their ways" but you didn't start this to be like record companies. You started it to make records. So now it's much easier. We wanted to do a record and so do the Vipers. We'll pay for it because the band doesn't have any money and when whatever it costs, we'll show the Vipers - and we'll say like for instance our first record. It's out now. That cost $900 for 2,000 records. After we sell enough records to cover the cost, we'll split the money with the Vipers. And then we'll take our money and put it right back into a 45 we did with Boogie Woogie Red and then we'll take whatever money we make from that and do an album with Boogie Woogie Red and John Nicholas , and then we'll take our money and do a live Robert Jr. Lockwood album or maybe Mighty Joe Young. I mean we want to make some money. We want to do good retordings and make some money and put it into other smoke-infested ideas. Right now, we're doing an animated 16 mm. color cartoon called "Huron River Drive." The Vipers did the soundtrack and Chris Frayne designed it. The more money we get, the more we can do. Money can be quite a freedom. It doesn't always have to be a hassle. The Vipers are an exceptional band. They're vipers. They're people we've been friends with for a really long time. They're not "them." They're "us." So we're friends and we can work and play really well together. The drummer's name is Fran Christina. He played with the Boogie Brothers for a long time and he comes from the East Coast. The harp player's name is Steve Nardella, he's also from the East Coast. And Sarah Brown's the bass player. And this guy George Bedard. He plays guitar. Used to play with a group called the Blue Jukes. He comes from around Ann Arbor. So does Sarah. Sarah got the name "Sister Sarah Brown" when she was in the Boogie Brothers. She hates it. She doesn't like it at all. Records seem to be a good thing to sell. Records are music and music is as necessary as food. So I read this over and it says, "records are as necessary as food" and that sounds like a really dramatic thing to say or a...a... .really desparate thing to say but when you think about it...I mean if you didn't have any music. If you were born and you never heard any'music you'd probably make your own. You'd try to make some kind of sound. Some kind of music. You need music. It's something you need. It seems to be like a compliment to the human nature. You just gotta have it. So that's why we sell records. OK, so you can buy the records. I mean that's gotta be part of it. You have to buy the records, at the Blind Pig and we hope all over. Or mail order through our ad that's in the SUN. And that's'what BLIND PIG RECORDS is about, at least for now.