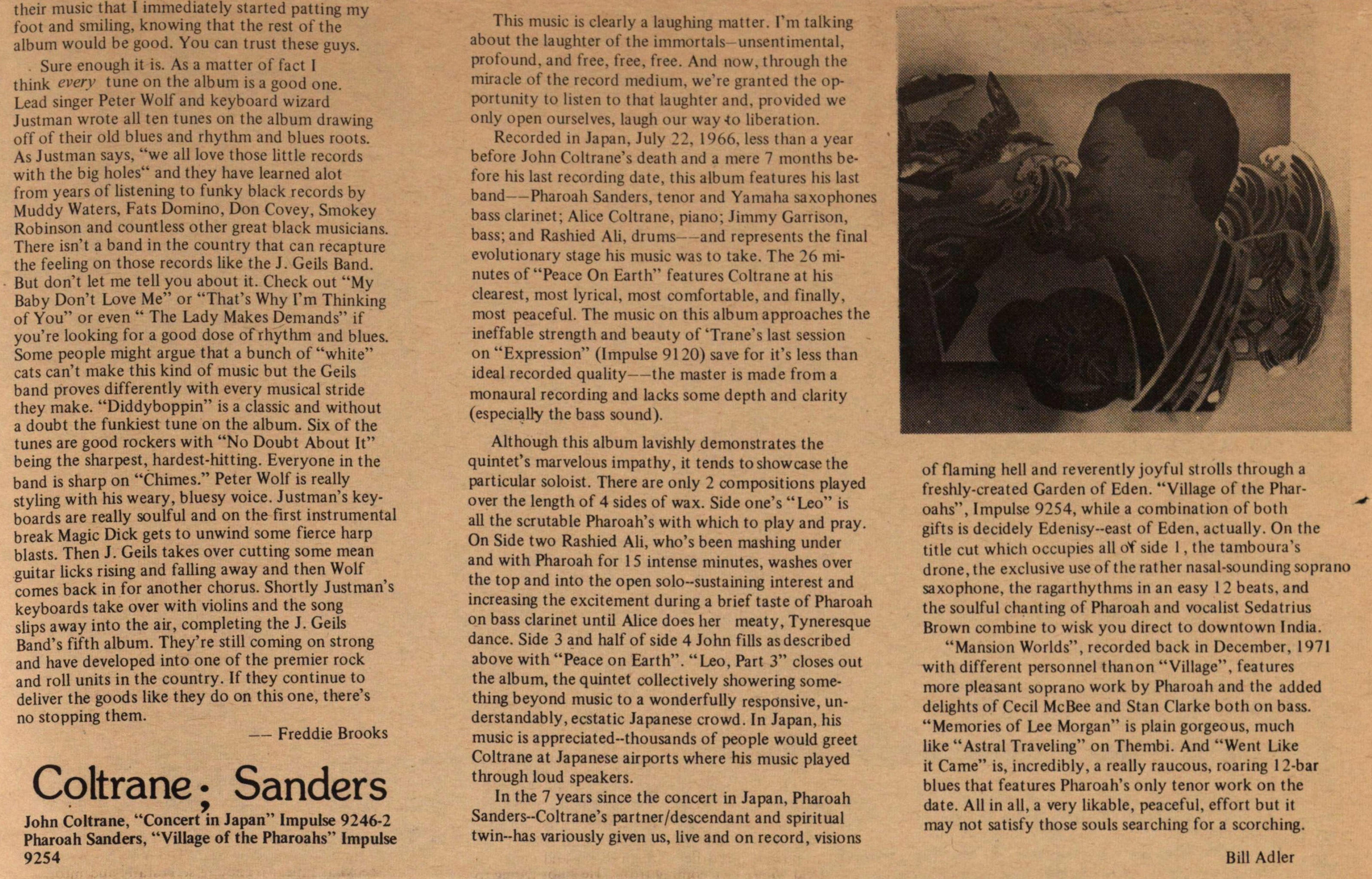 John Coltrane, "Concert in Japan" Impulse 9246-2 Pharoah Sanders, "Village of the Pharoahs" Impulse 9254 This music is clearly a laughing matter. I'm talking about the laughter of the immortals unsentimental. profound. and free, free, free. And now, through the miracle of the record medium, we're granted the opportunity to listen to that laughter and, provided we only open ourselves, laugh our way o liberation. Recorded in Japan, July 22, 1966. less than a year before John Coltrane's death and a mere 7 months before his last recording date, this album features his last band - Pharoah Sanders, tenor and Yamaha saxophones bass clarinet; Alice Coltrane, piano; Jimmy Garrison, bass; and Rashied Ali, drums -and represents the final evolutionary stage his music was to take. The 26 minutes of "Peace On Earth" features Coltrane at his clearest, most lyrical, most comfortable, and finally, most peaceful. The music on this album approaches the ineffable strength and beauty of 'Trane's last session on "Expression" (Impulse 91 20) save for it's less than ideal recorded quality - the master is made from a monaural recording and lacks some depth and clarity (especialry the bass sound). Although this album lavishly demonstrates the quintet's marvelous impathy, it tends to showcase the particular soloist. There are only 2 compositions played over the length of 4 sides of wax. Side one's "Leo" is all the scrutable Pharoah's with which to play and pray. On Side two Rashied Ali, who's been mashing under and with Pharoah for 1 5 intense minutes, washes over the top and into the open solo-sustaining interest and increasing the excitement during a brief taste of Pharoah on bass clarinet untü Alice does her meaty, Tyneresque dance. Side 3 and half of side 4 John filis as described above with "Peace on Earth". "Leo, Part 3" closes out the album, the quintet collectively showering something beyond music to a wonderfully respönsive, understandably, ecstatic Japanese crowd. In Japan, his music is appreciated-thousands of people would greet Coltrane at Japanese airports where his music played through loud speakers. In the 7 years since the concert in Japan, Pharoah Sanders-Coltrane's partnerdescendant and spiritual twin--has variously given us, live and on record, visions of flaming heil and reverentlyjoyful strolls through a freshly-created Garden of Eden. "Village of the Pharoahs", Impulse 9254, while a combination of both gifts is decidely Edenisy-east of Eden, actually. On the title cut which occupies all of side I , the tamboura's drone.the exclusive use of the rat her nasal-sounding soprano saxophone, the ragarthythms in an easy 1 2 beats, and the soulful chanting of Pharoah and vocalist Sedatrius Brown combine to wisk you direct to downtown India. "Mansion Worlds", recorded back in December, 1971 with different personnel tlianon "Village", features more pleasant soprano work by Pharoah and the added delights of Cecil McBee and Stan Clarke both on bass. "Memories of Lee Morgan" is plain gorgeous, much like "Astral Traveling" on Thembi. And "Went Like it Came" is, incredibly, a really raucous, roaring 12-bar blues that features Pharoah's only tenor work on the date. All in all, a very likable, peaceful, effort but it may not satisfy those souls searching for a scorching.