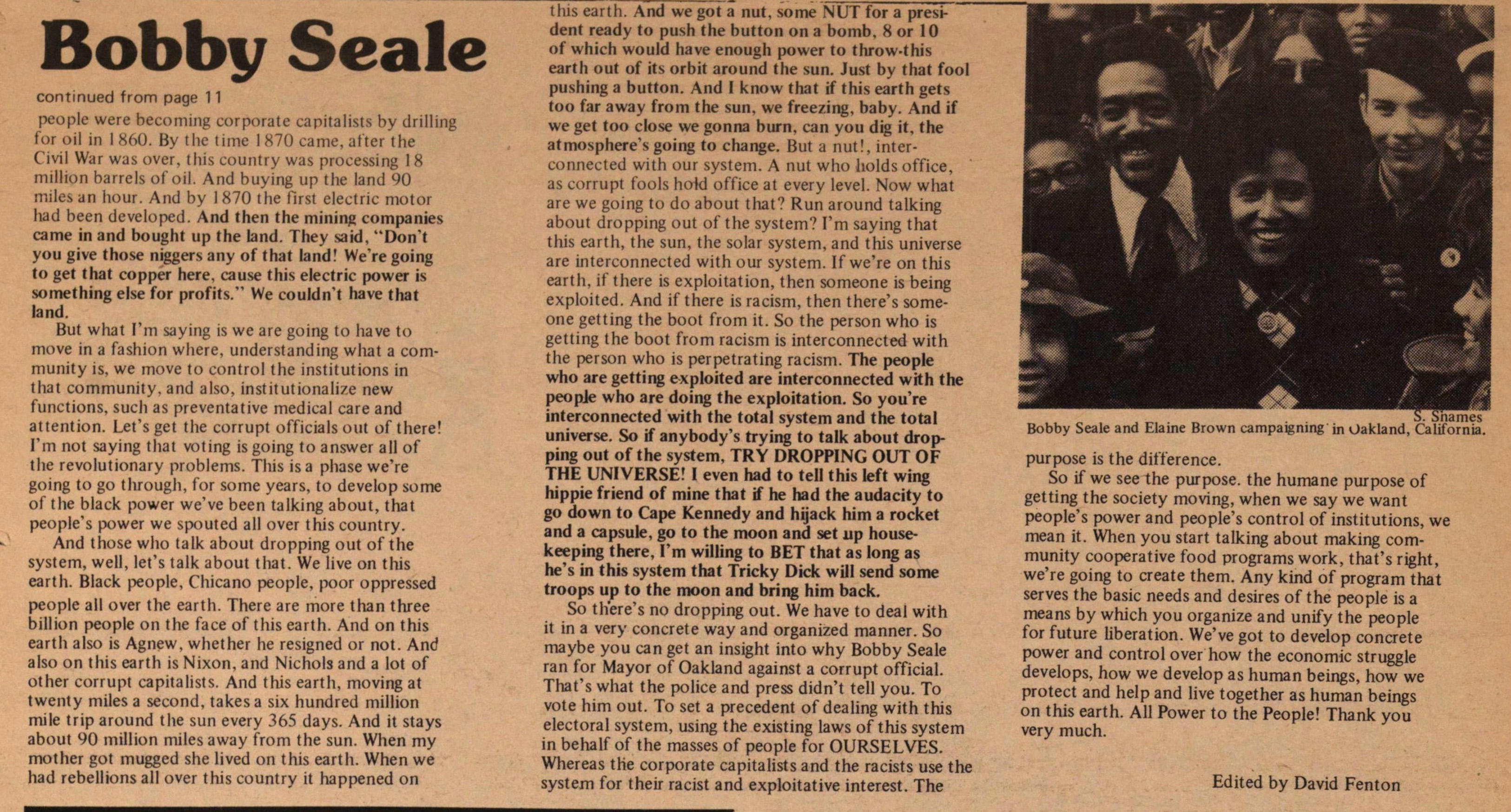 Bobby Seale continued from page 1 1 people were becoming corporate capitalists by drilling for oil in l 860. By the lime I 870 carne, after the Civil War was over, tliis country was processing 1 8 million barrels of oil. And buying up the land 90 miles an liour. And by 1 870 the first electric motor had been developed. And then the mining companies carne in and bought up the land. They said, "Don't you give those niggers any of that land! We're going to get that copper here, cause this electric power is something else for profits." We couldn't have that land. But what l'm saying is we are going to have to move in a fashion wliere, understanding what a community is. we move to control the institutions in that community. and also, institutionalize new functions, such as preventative medical care and attention. Let'sget the corrupt officials out of there! l'm not saying that voting is going to answer all of the revolutionary problems. This isa phase we're going to go through, for some years, to develop some of the black power we've been talking about, that people's power we spouted all over this country. And those who talk about dropping out of the system, well, let's talk about that. We live on this earth. Black people, Chicano people, poor oppressed people all over the earth. There are more than three billion people on the face of this earth. And on this earth also is Agnew, whether he resigned or not. And also on this earth is Nixon, and Nichols and a lot of other corrupt capitalists. And this earth, moving at twenty miles a second, takesa six hundred million mile trip around the sun every 365 days. And it stays about 90 million miles away from the sun. When my mother got mugged she lived on this earth. When we had rebellions all over this country it happened on this earth. And we got a nut, some NUT for a president ready tu push the button on a bomb. 8 or 10 of which would have enough power to throw-this earth out of its orbit around the sun. Just by that fooi pushing a button. And I know that if this earth gets too far away from the sun, we freezing, baby. And if we get too close we gonna burn. can you dig it, the atmosphere'sgoing to change. But a nut!, interconnected with our system. A nut who holds office, as corrupt fools hotd office at every level. Now wliat are we going to do about that? Run around talking about dropping out of the system? I'm saying that this earth, the sun, the solar system, and this universe are interconnected with our system. If we're on this earth, if there is exploitation, then someone is being exploited. And if there is racism, then there's someone getting the boot from it. So the person who is getting the boot from racism is interconnected with the person who is perpetrating racism. The people who are getting exploited are interconnected with the peopje who are doing the exploitation. So you're interconnected with the total system and the total universe. So if anybody's trying to talk about dropping out of the system, TRY DROPPING OUT OF THE UNIVERSE! I even had to teil this left wing hippie friend of mine that if he had the audacity to go down to Cape Kennedy and hijack him a rocket and a capsule, go to the moon and set up housekeeping there, I'm willing to BET that as long as he's in this system that Tricky Dick will send some troops up to the moon and bring him back. So there's no dropping out. We have to deal with it in a very concrete way and organized manner. So maybe you can get an insight into why Bobby Seale ran for Mayor of Oakland against a corrupt official. That's what the pólice and press didn't teil you. To vote him out. To set a precedent of dealing with this electoral system, using the existing laws of this system in behalf of the masses of people for OURSELVES. Whereas the corporate capitalists and the racists use the system for their racist and exploitative interest. The purpose is the ditïerence. So if we see the purpose, the humane purpose of getting the society moving, when we say we want people's power and people's control of institutions, we mean it. When you start talking about making community cooperative food programs work, that's right, we're going to créate them. Any kind of program that serves the basic needs and desires of the people is a means by which you organize and unify the people for future liberation. We've got to develop concrete power and control over how the economie struggle develops, how we develop as human beings, how we protect and help and live together as human beings on this earth. All Power to the People! Thank you very much.