Tribal Funding continuecl from page 3 me... 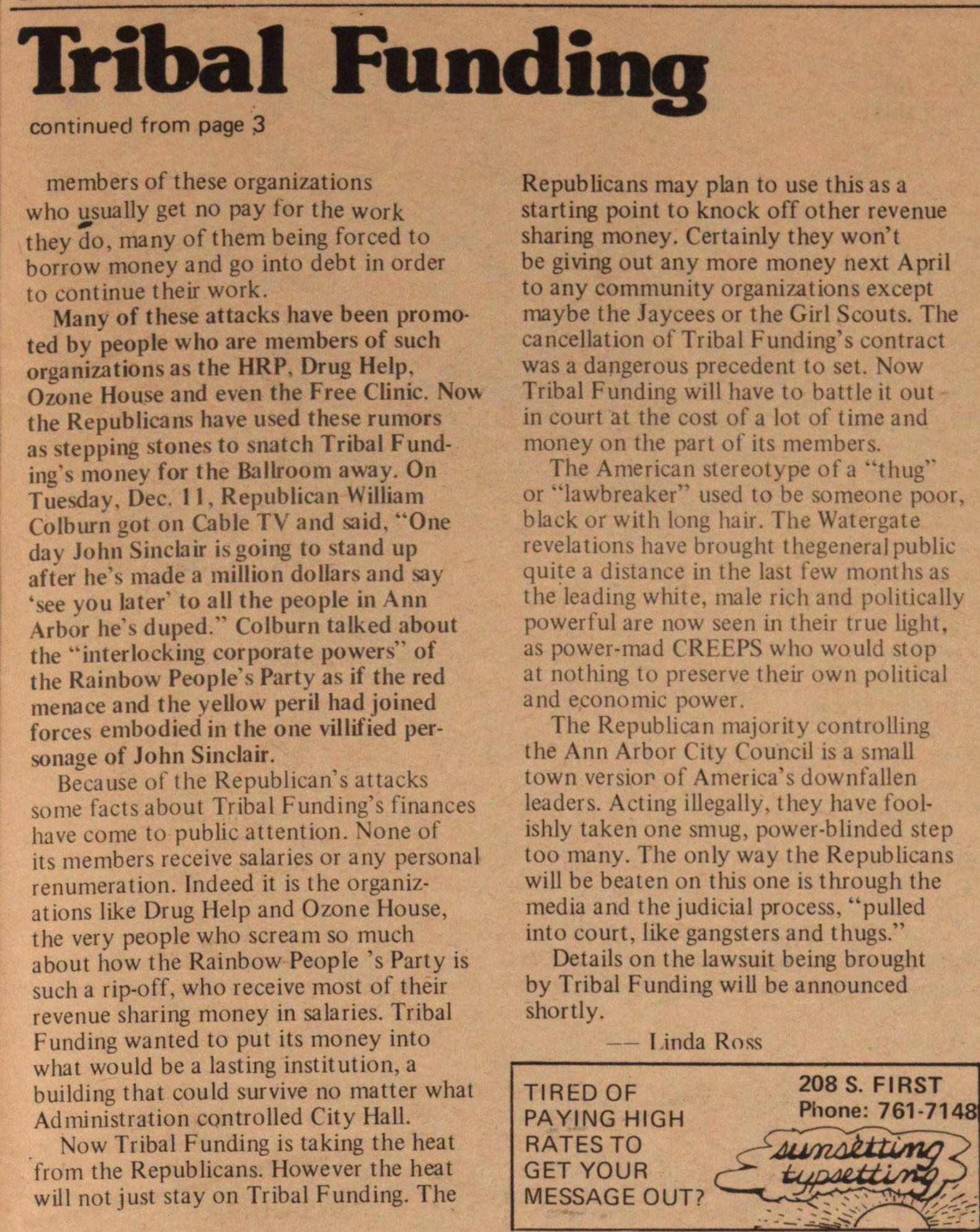 Tribal Funding continuecl from page 3 members of these organizations who usually get no pay tor the work tbey do, many of them being forced to borrow money and go into debt in order to continue their work. Many of these attacks have been promoted by people who are members of such organizations as the HRP, Drug Help, Ozone House and even the Free Clinic. Now the República ns have used these rumors as stepping stones to snatch Tribal Funding's money for the Ballroom away. On Tuesday. Dec. 1 1, Republican William Colburn got on Cable TV and said, "One day John Sinclair isgoing to stand up after he's made a million dollars and sa y 'see you later' to all the people in Ann Arbor he's duped." Colburn talked about the "interlocking corporate powers" of the Rainbow People' s Party as if the red menace and the yellow peril had joined forces embodied in the one villif ied personage of John Sinclair. Beca use of the Republican's attacks some facts about Tribal Funding's finances have come to public attention. None of its members receive salaries or any personal renumeration. Indeed it is the organizations like Drug Help and Ozone House, the very people who scream so much about how the Rainbow People 's Party is such a rip-off. who receive most of their revenue sharing money in salaries. Tribal Funding wanted to put its money into wliat would be a lasting instit ution, a building that could survive no matter what Administración controlled City Hall. Now Tribal Funding is taking the heat from the Republicans. However the heat will not just stay on Tribal Funding. The Republicans may plan to use this as a starting point to knock off other revenue sharing money. Certainly they won't be giving out any more money next April to any community organizations except maybe the Jaycees or the Girl Scouts. The caaceUation of Tribal Funding's contract was a dangerous precedent to set. Now Tribal Funding will have to battle it out in court at the cost of a lot of time and money on the part of its members. The American stereotype of a "thug'" or "lawbreaker" used to be someone poot. black or vvith long hair. The Watergate revelations have brought t hegenera] public quite a distance in the last few months as the leading white, male rich and politically powerful are now seen in their truc light. as power-mad CREEPS who would stop at nothing to preserve their own politica! and economie power. The Republican majority controlling the Ann Arbor City Council is a sniall town versiop of America's downfallen leaders. Acting illegally, they have foolishly taken one smug, power-blinded step too many. The only way the Republicans will be beaten on this one is through the media and the judicial process, "pulled into court, like gangsters and thugs." Details on the lawsuit being brought by Tribal Funding will be announced shortly.