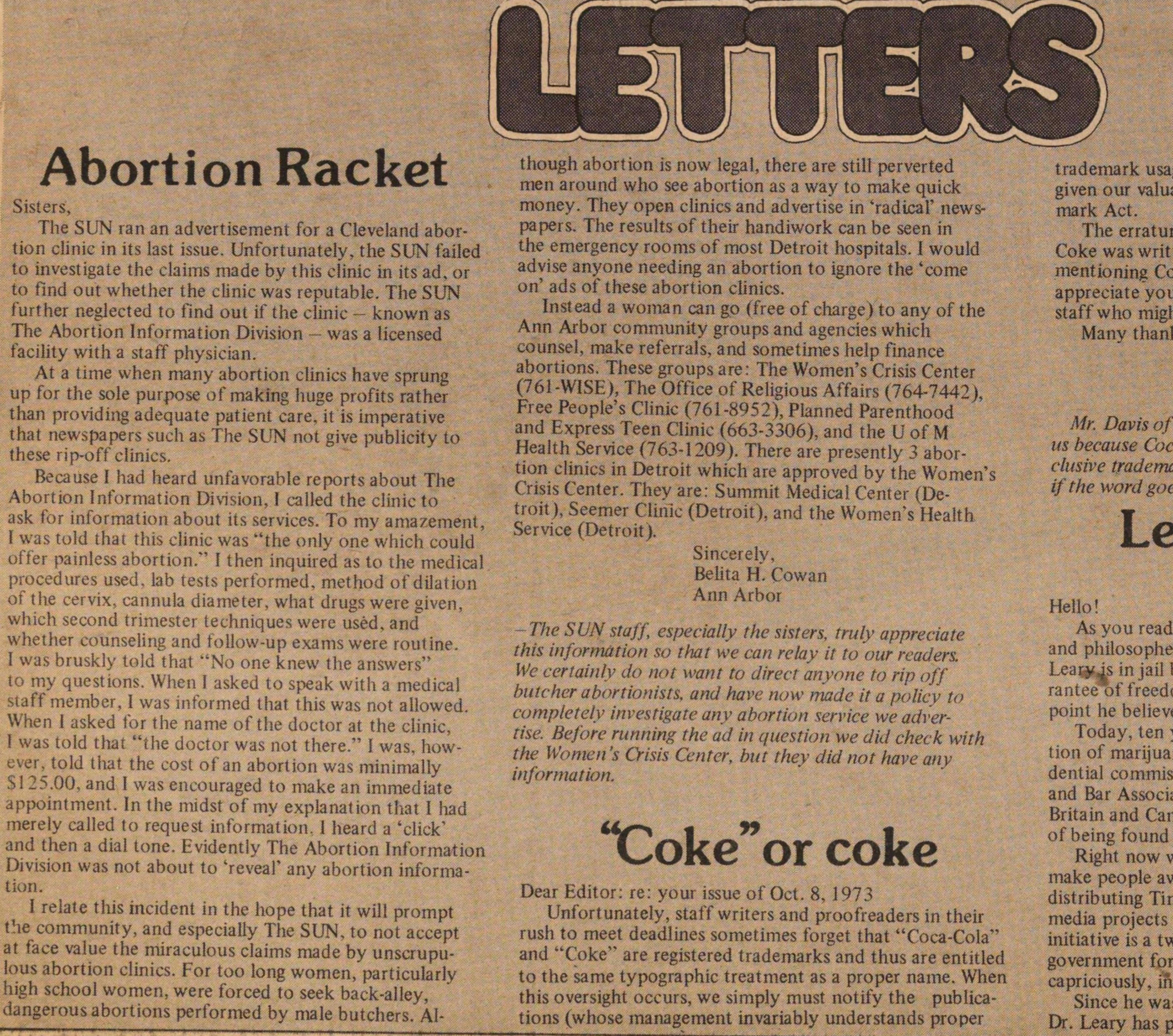 The SUN ran an advertisement for a Cleveland abortion clinic in its last issue. Unfortunately, the SUN failed to investigate the claims made by this clinic in its ad, or to find out whether the clinic was reputable. The SUN further neglected to find out if the clinic - known as The Abortion Information Division - was a licensed facility with a staff physician.

At a time when many abortion clinics have sprung up for the sole purpose of making huge profits rather than providing adequate patient care, it is imperative that newspapers such as The SUN not give publicity to these rip-off clinics.

Because I had heard unfavorable reports about The Abortion Information Division, I called the clinic to ask for information about its services. To my amazement, I was told that this clinic was "the only one which could offer painless abortion." I then inquired as to the medical procedures used. lab tests performed. method of dilation of the cervix, cannula diameter, what drugs were given, which second trimester techniques were used, and whether counseling and follow-up exams were routine. I was brusquely told that "No one knew the answers" to my questions. When I asked to speak with a medical staff member, I was informed that this was not allowed. When I asked for the name of the doctor at the clinic, I was told that "the doctor was not there." I was, however, told that the cost of an abortion was minimally $125.00, and I was encouraged to make an immediate appointment. In the midst of my explanation that I had merely called to request information. I heard a 'click' and then a dial tone. Evidently The Abortion Information Division was not about to 'reveal' any abortion information.

I relate this incident in the hope that it will prompt the community, and especially The SUN, to not accept at face value the miraculous claims made by unscrupulous abortion clinics. For too long women, particularly high school women, were forced to seek back-alley, dangerous abortions performed by male butchers. Although abortion is now legal, there are still perverted men around who see abortion as a way to make quick money. They open clinics and advertise in 'radical' newspapers. The results of their handiwork can be seen in the emergency rooms of most Detroit hospitals. I would advise anyone needing an abortion to ignore the 'come on' ads of these abortion clinics.

Instead a woman can go (free of charge) to any of the Ann Arbor community groups and agencies which counsel, make referrals, and sometimes help finance abortions. These groups are: The Women's Crisis Center (761-WISE), The Office of Religious Affairs (764-7442) Free People's Clinic (761-8952), Planned Parenthood and Express Teen Clinic (663-3306), and the U of M Health Service (763-1209). There are presently 3 abortion clinics in Detroit which are approved by the Women's Crisis Center. They are: Summit Medical Center (Detroit), Seemer Clinic (Detroit), and the Women's Health Service (Detroit).

The SUN staff, especially the sisters, truly appreciate this information so that we can relay it to our readers. We certainly do not want to direct anyone to rip off butcher abortionists. and have now made it a policy to completely investigate any abortion service we advertise. Before running the ad in question we did check with the Women 's Crisis Center, but they did not have any information.