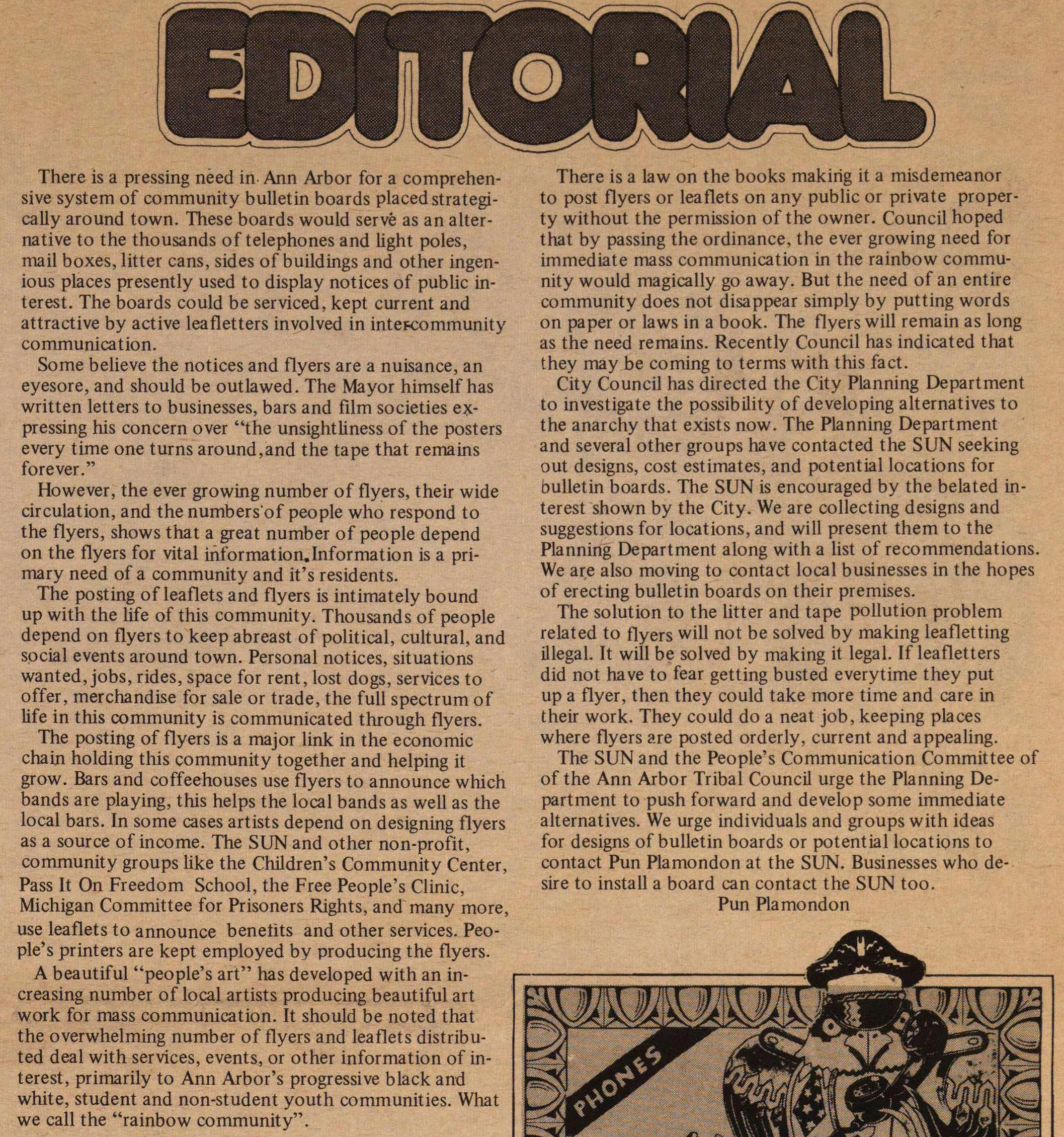 There is a pressing need in Ann Arbor for a comprehensive system of community bulletin boards placed strategically around town. These boards would serve as an alternative to the thousands of telephones and light poles, mail boxes, litter cans, sides of buildings and other ingenious places presently used to display notices of public interest. The boards could be serviced, kept current and attractive by active leafletters involved in inteFCommunity communication. Some believe the notices and flyers are a nuisance, an eyesore, and should be outlawed. The Mayor himself has written letters to businesses, bars and film societies expressing his concern over "the unsightliness of the posters every time one turns around, and the tape that remains forever." However, the ever growing number of flyers, their wide circulation, and the numbersof people who respond to the flyers, shows that a great number of people depend on the flyers for vital information.Information is a primary need of a community and it's residents. The posting of leaflets and flyers is intimately bound up with the life of this community. Thousands of people depend on flyers to keep abreast of political, cultural, and social events around town. Personal notices, situations wanted, jobs, rides, space for rent, lost dogs, services to offer, merchandise for sale or trade, the full spectrum of life in this community is communicated through flyers. The posting of flyers is a major link in the economie chaln holding this community together and helping it grow. Bars and coffeehouses use flyers to announce which bands are playing, this helps the local bands as well as the local bars. In some cases artists depend on designing flyers as a source of income. The SUN and other non-profit, community groups like the Children's Community Center, Pass It On Freedom School, the Free People's Clinic, Michigan Committee for Prisoners Rights, and many more, use leaflets to announce beneüts and other services. People's printers are kept employed by producing the flyers. A beautiful "people's art" has developed with an increasing number of local artists producing beautiful art work for mass communication. It should be noted that the overwhelming number of flyers and leaflets distributed deal with services, events, or other information of interest, primarily to Ann Arbor's progressive black and white, student and non-student youth communities. Wliat we cali the "rainbow community". There is a law on the books makirig it a misdemeanor to post flyers or lea flets on any public or private proper - ty without the permission of the owner. Council hoped that by passing the ordinance, the ever growing need for immediate mass communication in the rainbow community would magically go away. But the need of an entire community does not disappear simply by putting words on paper or laws in a book. The flyers will remain as long as the need remains. Recently Council has indicated that they may be coming to terms with this fact. City Council has directed the City Planning Department to investígate the possibility of developing alternatives to the anarchy that exists now. The Planning Department and several other groups have contacted the SUN seeking out designs, cost estimates, and potential locations for bulletin boards. The SUN is encouraged by the belated interest shown by the City. We are collecting designs and suggestions for locations, and will present them to the Planning Department along with a list of recommendations. We are also moving to contact local businesses in the hopes of erecting bulletin boards on their premises. The solution to the litter and tape pollution problem related to flyers will not be solved by making leafletting illegal. It will be solved by making it legal. If leafletters did not have to fear getting busted everytime they put up a flyer, then they could take more time and care in their work. They could do a neat job, keeping places where flyers are posted orderly, current and appealing. The SUN and the People's Communication Committee of of the Ann Arbor Tribal Council urge the Planning Department to push forward and develop some immediate alternatives. We urge individuals and groups with ideas for designs of bulletin boards or potential locations to contact Pun Plamondon at the SUN. Businesses who desire to install a board can contact the SUN too.