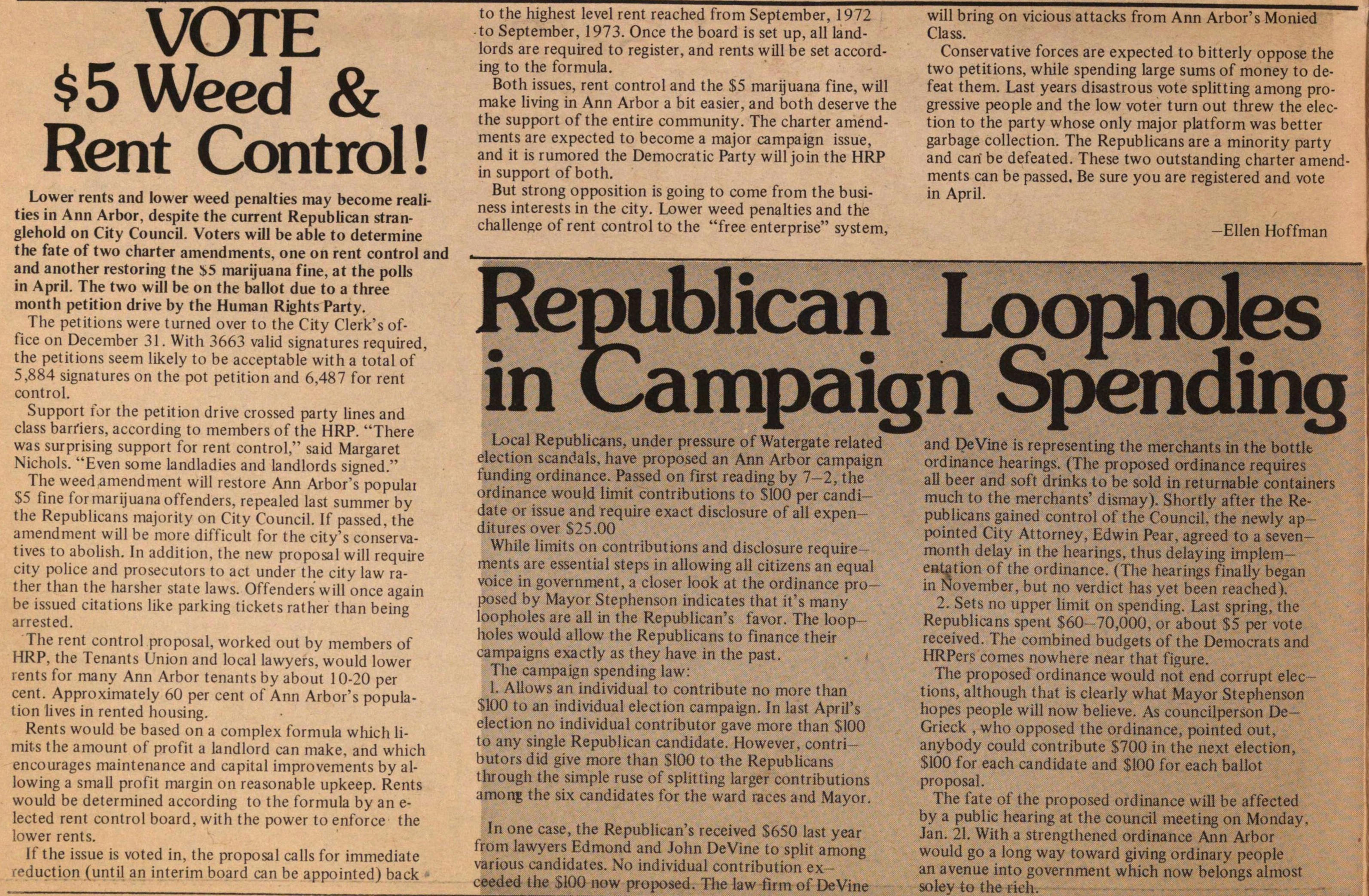 Lower rents and lower weed penalties may become realities in Ann Arbor, despite the current Republican stranglehold on City Council. Voters will be able to determine the fate of two charter amendments, one on rent control and and another restoring the $5 marijuana fine, at the polls in April. The two will be on the ballot due to a three month petition drive by the Human Rights Party.

The petitions were turned over to the City Clerk's office on December 31 . With 3663 valid signatures required, the petitions seem likely to be acceptable with a total of 5,884 signatures on the pot petition and 6,487 for rent control.

Support for the petition drive crossed party lines and class barriers, according to members of the HRP. "There was surprising support for rent control," said Margaret Nichols. "Even some landladies and landlords signed."

The weed amendment will restore Ann Arbor's popular S5 fine for marijuana offenders, repealed last summer by the Republicans majority on City Council. If passed, the amendment will be more difficult for the city's conservatives to abolish. In addition. the new proposal will require city police and prosecutors to act under the city law rather than the harsher state laws. Offenders will once again be issued citations like parking tickets rather than being arrested.

The rent control proposal, worked out by members of HRP, the Tenants Union and local lawyers, would lower rents for many Ann Arbor tenants by about 10-20 per cent. Approximately 60 per cent of Ann Arbor's population lives in rented housing.

Rents would be based on a complex formula which limits the amount of profit a landlord can make, and which encourages maintenance and capital improvements by allowing a small profit margin on reasonable upkeep. Rents would be determined according to the formula by an elected rent control board, with the power to enforce the lower rents.

If the issue is voted in, the proposal calls for immediate reduction (until an interim board can be appointed) back to the highest level rent reached from September, 1972 to September, 1973. Once the board is set up, all landlords are required to register, and rents will be set according to the formula.

Both issues, rent control and the $5 marijuana fine, will make living in Ann Arbor a bit easier, and both deserve the the support of the entire community. The charter amendments are expected to become a major campaign issue, and it is rumored the Democratic Party will join the HRP in support of both.

But strong opposition is going to come from the business interests in the city. Lower weed penalties and the challenge of rent control to the "free enterprise" system, will bring on vicious attacks from Ann Arbor's Monied Class.

Conservative forces are expected to bitterly oppose the two petitions, while spending large sums of money to defeat them. Last years disastrous vote splitting among progressive people and the low voter turn out threw the election to the party whose only major platform was better garbage collection. The Republicans are a minority party and can be defeated. These two outstanding charter amendments can be passed. Be sure you are registered and vote in April.