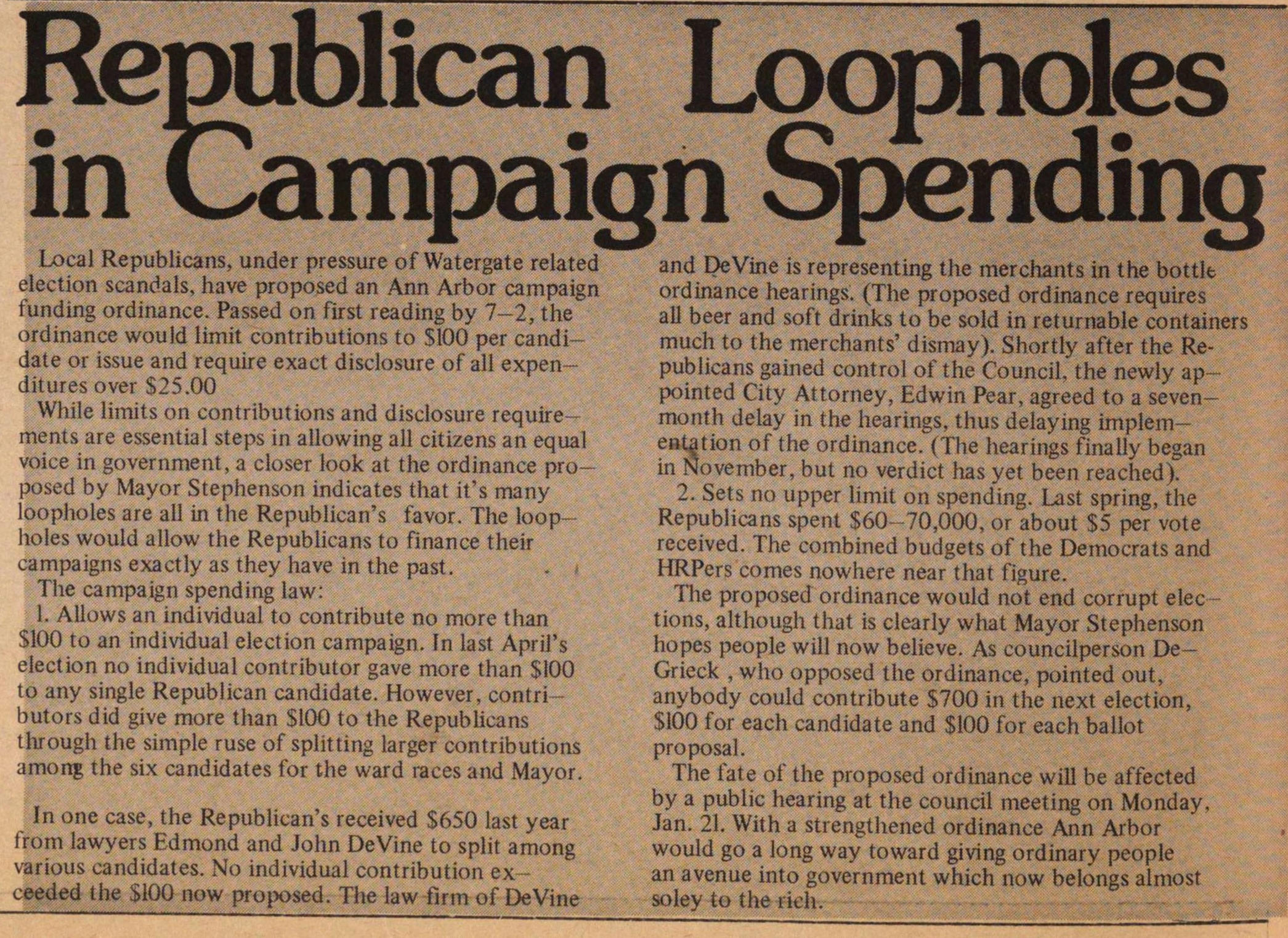 ujcai K.epuDucans, unaer pressure 01 watergate related election scandals, have proposed an Ann Arbor campaign funding ordinance. Passed on first reading by 7-2, the ordinance wou ld limit contributions to 5100 per candidate or issue and require exact disclosure of all expendituresover S25.OO While limits on contributions and disclosure requirements are essential steps in allowing all citizens an equal voice in government, a closer look at the ordinance pro- posed by Mayor Stephenson indicates that it's many loopholes are all in the Republican's favor. The loopholes would allow the Republicans to finance their campaigns exactly as they have in the past. The campaign spending law: 1. AUows an individual to contribute no more than S100 to an individual election campaign. In last Aprü's election no individual contributor gave more than $100 to any single Republican candidate. However, contributors did give more than $100 to the Republicans through the simple ruse of splitting larger contributions amortg the six candidates for the ward races and Mayor. In one case, the Republican's received S650 last year from lawyers Edmond and John De Vine to split among various candidates. No individual contribution ex - ceeded the $100 now pro{x$ed. The law firm of De Vine and Devine is representing the merchants in the bottlfc ordinance hearings. (The proposed ordinance requires all beer and soft drinks to be soid in returnable containers much to the merchants' dismay). Shortly after the República ns gained control of the Council, the newly appointed City Attorney, Edwin Pear, agreed to a sevenmonth delay in the hearings, thus delaying implem- eatation of the ordinance. (The hearings finally began in November, but no verdict has yet been reached). 2. Sets no upper limit on spending. Last spring, the Republicans spent $60-70,000, or about $5 per vote received. The combined budgets of the Democrats and HRPers comes nowhere near that figure. The proposed ordinance would not end corrupt elections, although that is clearly what Mayor Stephenson hopes people will now believe. As councilperson DeGrieck , who opposed the ordinance, pointed out, anybody could contribute $700 in the next election, $100 for each candidate and $100 for each ballot proposal. The fate of the proposed ordinance will be affected by a public hearing at the council meeting on Monday, Jan. 21. With a strengthened ordinance Ann Arbor would go a long way toward giving ordinary people an avenue into government which now belongs almost soley to the rkh.