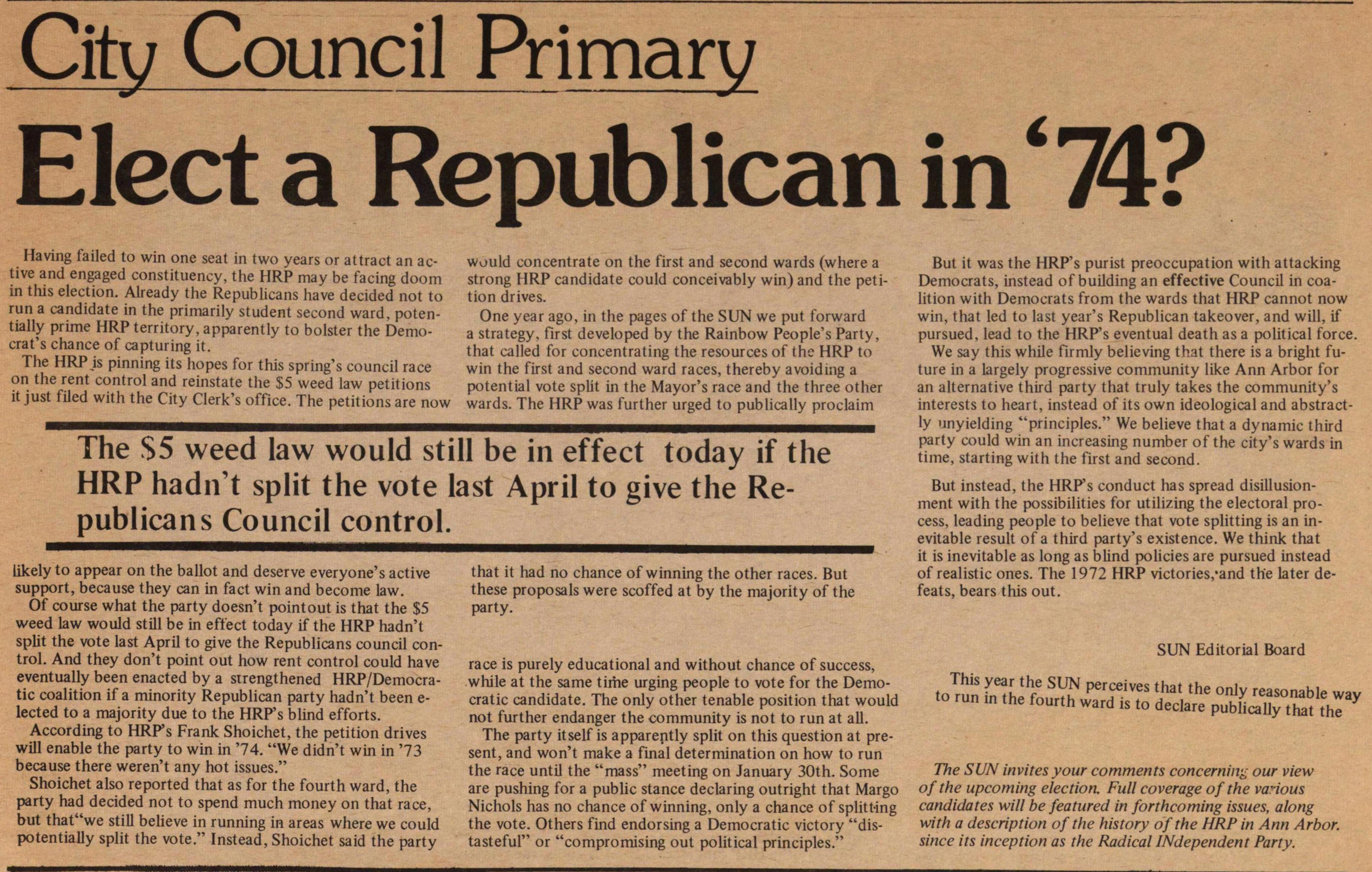 The $5 weed law would still be in effect today if the HRP hadn't split the vote last April to give the Republicans Council control.

Having failed to win one seat in two years or attract an active and engaged constituency, the HRP may be facing doom in this election. Already the Republicans have decided not to run a candidate in the primarily student second ward, potentially prime HRP territory, apparently to bolster the Democrat's chance of capturing it.

The HRP is pinning its hopes for this spring's council race on the rent control and reinstate the $5 weed law petitions it just filed with the City Clerk's office. The petitions are now likely to appear on the ballot and deserve everyone's active support, because they can in fact win and become law.

Of course what the party doesn't point out is that the $5 weed law would still be in effect today if the HRP hadn't split the vote last April to give the Republicans council control. And they don't point out how rent control could have eventually been enacted by a strengthened HRP Democratic coalition if a minority Republican party hadn't been elected to a majority due to the HRP's blind efforts.

According to HRP's Frank Shoichet, the petition drives will enable the party to win in '74. "We didn't win in '73 because there weren't any hot issues."

Shoichet also reported that as for the fourth ward, the party had decided not to spend much money on that race, but that "we still believe in running in areas where we could potentially split the vote." Instead, Shoichet said the party would concentrate on the first and second wards (where a strong HRP candidate could conceivably win) and the petition drives.

One year ago, in the pages of the SUN we put forward a strategy, first developed by the Rainbow People's Party, that called for concentrating the resources of the HRP to win the first and second ward races, thereby avoiding a potential vote split in the Mayor's race and the three other wards. The HRP was further urged to publicly proclaim that it had no chance of winning the other races. But these proposals were scoffed at by the majority of the party.

This year the SUN perceives that the only reasonable way to run in the fourth ward is to declare publicly that the race is purely educational and without chance of success, while at the same time urging people to vote for the Democratic candidate. The only other tenable position that would not further endanger the community is not to run at all.

The party itself is apparently split on this question at present, and won't make a final determination on how to run the race until the "mass" meeting on January 30th. Some are pushing for a public stance declaring outright that Margo Nichols has no chance of winning, only a chance of splitting the vote. Others find endorsing a Democratic victory "distasteful" or "compromising our political principles."

But it was the HRP's purist preoccupation with attacking Democrats, instead of building an effective Council in coalition with Democrats from the wards that HRP cannot now win, that led to last year's Republican takeover, and will, if pursued, lead to the HRP's eventual death as a political force.

We say this while firmly believing that there is a bright future in a largely progressive community like Ann Arbor for an alternative third party that truly takes the community's interests to heart, instead of its own ideological and abstractly unyielding "principles." We believe that a dynamic third party could win an increasing number of the city's wards in time, starting with the first and second.

But instead, the HRP's conduct has spread disillusionment with the possibilities for utilizing the electoral process, leading people to believe that vote splitting is an inevitable result of a third party's existence. We think that it is inevitable as long as blind policies are pursued instead of realistic ones. The 1972 HRP victories.-and the later defeats, bears this out.

The SUN invites your comments concerning our view of the upcoming election. Full coverage o f the various candidates will be featured in forthcoming issues, along with a description of the history of the HRP in Ann Arbor. since its inception as the Radical INdependent Party.