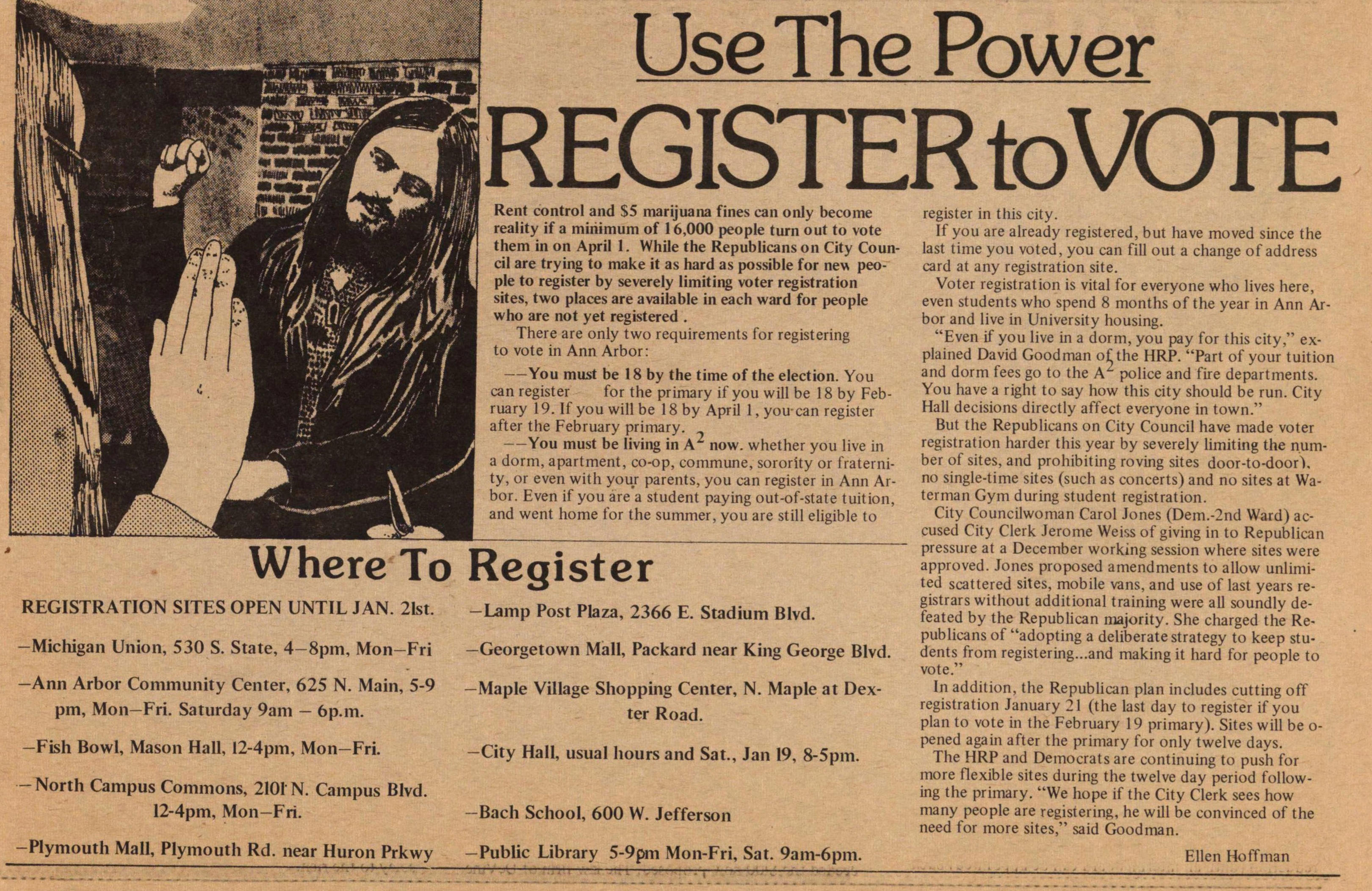 Rent control and S5 marijuana fines can only become reality if a minimum of 1 6,000 people turn out to vote them in on April 1 . While the Republicans on City Council are trying to make it as hard as possible for new people to register by severely limiting voter registration sites, two places are available in each ward for people who are not yet registered . There are only two requirements for registering to vote in Ann Arbor: - You must be 18 by the time of the election. You can register for the primary if you will be 1 8 by February 19. If you will be 18 by April 1, can register after the February primary. - You must be living in A now. whether you Uve in a dorm, apartment, co-op, commune, sororíty or fraternity, or even with your parents, you can register in Ann Arbor. Even if you are a student paying out-of-state tuition, and went home for the summer, you are still eligible to register in this city. If you are already registered, but have moved since the last time you voted, you can fill out a change of address card at any registration site. Voter registration is vital for everyone who lives here, even students who spend 8 months of the year in Ann Arbor and live in University housing. "Even if you live in a dorm, you pay for this city," explained David Goodman of the HRP. "Part of your tuition and dorm fees go to the A pólice and fire departments. You have a right to say how this city should be run. City Hall decisions directly affect everyone in town." But the Republicans on City Council have made voter registration harder this year by severely limiting the number of sites, and prohibiting roving sites door-to-doorï. no single-time sites (such as concerts) and no sites at Waterman Gym during student registration. City Councilwoman Carol Jones (Dem.-2nd Ward) accused City Clerk Jerome Weiss of giving in to Republican pressure at a December working session where sites were approved. Jones proposed amendments to allow unlimited scattered sites, mobile vans, and use of last years registrars without additional training were all soundly defeated by the Republican majority. She charged the Republicans of "adopting a delibérate strategy to keep students from registering.. .and making it hard for people to vote." In addition, the Republican plan includes cutting off registration January 21 (the last day to register if you plan to vote in the February 19 primary). Sites will be opened again after the primary for only twelve days. The HRP and Democrats are continuing to push for more flexible sites during the twelve day period following the primary. "We hope if the City Clerk sees how many people are registering, he will be convinced of the need for more sites," said Goodman. Whcrc To Register REGISTRATION SITES OPEN UNTIL JAN. 21st. -Michigan Union, 530 S. State, 4-8pm, Mon-Fri - Ann Arbor Community Center, 625 N. Main, 5-9 pm, Mon- Fri. Saturday 9am - 6p.m. -Fish Bowl, Mason Hall, 12-4pm, Mon- Fri. - North Campus Commons, 2101 N. Campus Blvd. 12-4pm, Mon- Fri. -Plymouth Mali, Plymouth Rd. near Huron Prkwy -Lamp Post Plaza, 2366 E. Stadium Blvd. -Georgetown Mali, Packard near King George Blvd. - Maple Village Shopping Center, N. Maple at Dexter Road. -City Hall, usual hours and Sat., Jan 19, 8-5pm. -Bach School, 600 W. Jefferson -Public Library 5-9pm Mon-Fri, Sat. 9am-6pm.