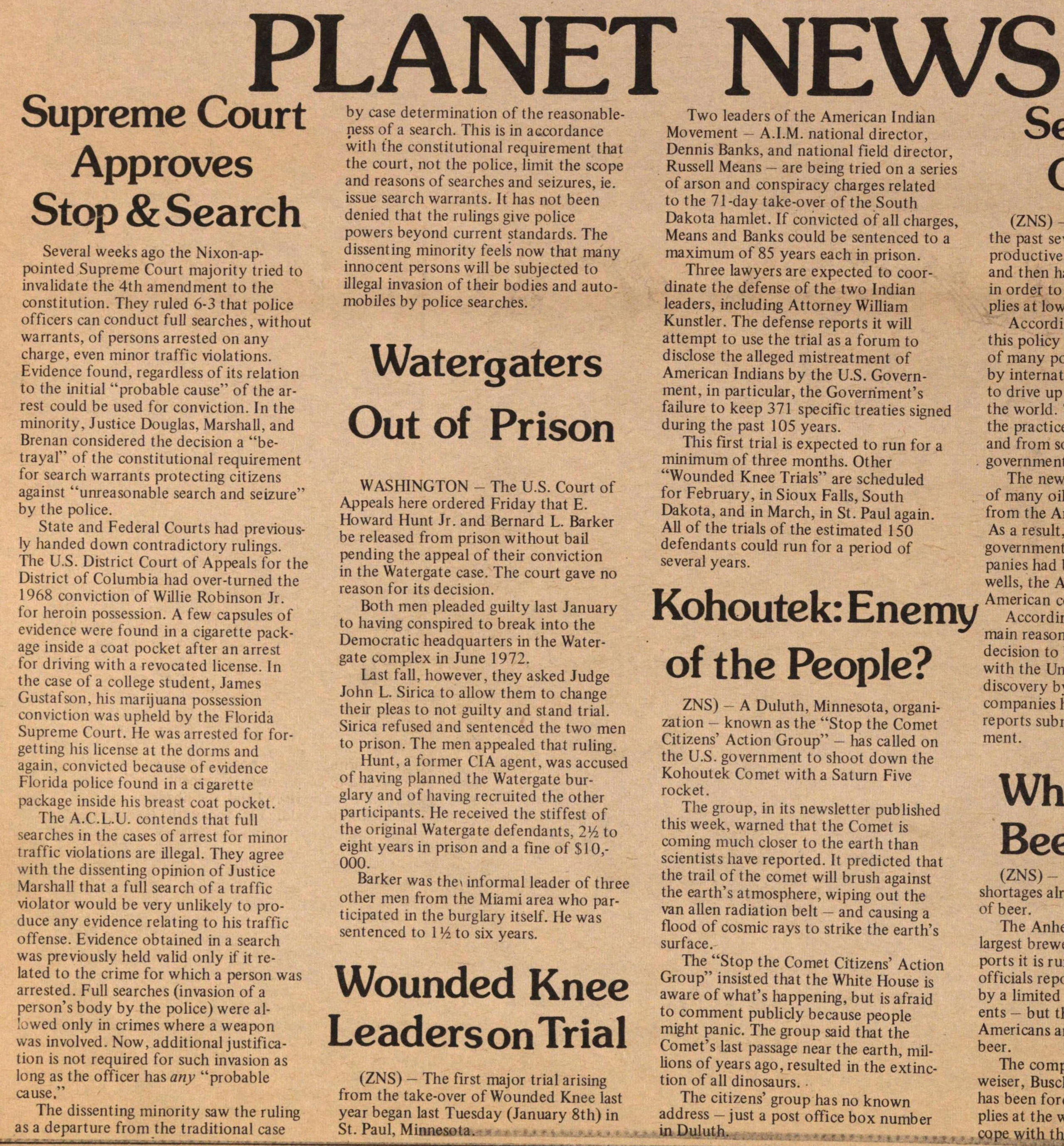 Several weeks ago the Nixon-appointed Supreme Court majority tried to invalídate the 4th amendment to the constitution. They ruled 6-3 that pólice officers can conduct fuU searches, without warrants, of persons arrested on any charge, even minor traffic violations. Evidence found, regardless of its relation to the initial "probable cause" of the arrest could be used for conviction. In the minority, Justice Douglas, Marshall, and Brenan considered the decisión a "betrayal" of the constitutional requirement for search warrants protecting citizens against "unreasonable search and seizure" by the pólice. State and Federal Courts had previously handed down contradictory rulings. The U.S. District Court of Appeals for the District of Columbia had over-turned the 1968 conviction of Willie Robinson Jr. for heroin possession. A few capsules of evidence wcre found in a cigarette package inside a coat pocket after an arrest for driving with a revocated license. In the case of a college student, James Gustafson, his marijuana possession conviction was upheld by the Florida Supreme Court. He was arrested for forgetting his license at the dorms and again, convicted because of evidence Florida pólice found in a cigarette package inside his breast coat pocket. The A.C.L.U. contends that full searches in the cases of arrest for minor traffic violations are illegal. They agree with the dissenting opinión of Justice Marshall that a full search of a traffic violator would be very unlikely to produce any evidence relating to his traffic offense. Evidence obtained in a search was previously held valid only if it related to the crime for which a person was arrested. Full searches (invasión of a person's body by the pólice) were allowed only in crimes where a weapon was involved. Now, additional justification is not required for such invasión as long as the officer has any "probable cause." The dissenting minority saw the ruling as a departure from the traditional case by case determination of the reasonableness of a search. This is in accordance with the constitutional requirement that the court, not the pólice, limit the scope and reasons of searches and seizures, ie. issue search warrants. It has not been denied that the rulings give pólice powers beyond current standards. The dissenting minority feels now that many innocent persons will be subjected to illegal invasión of their bodies and automobües by pólice searches.