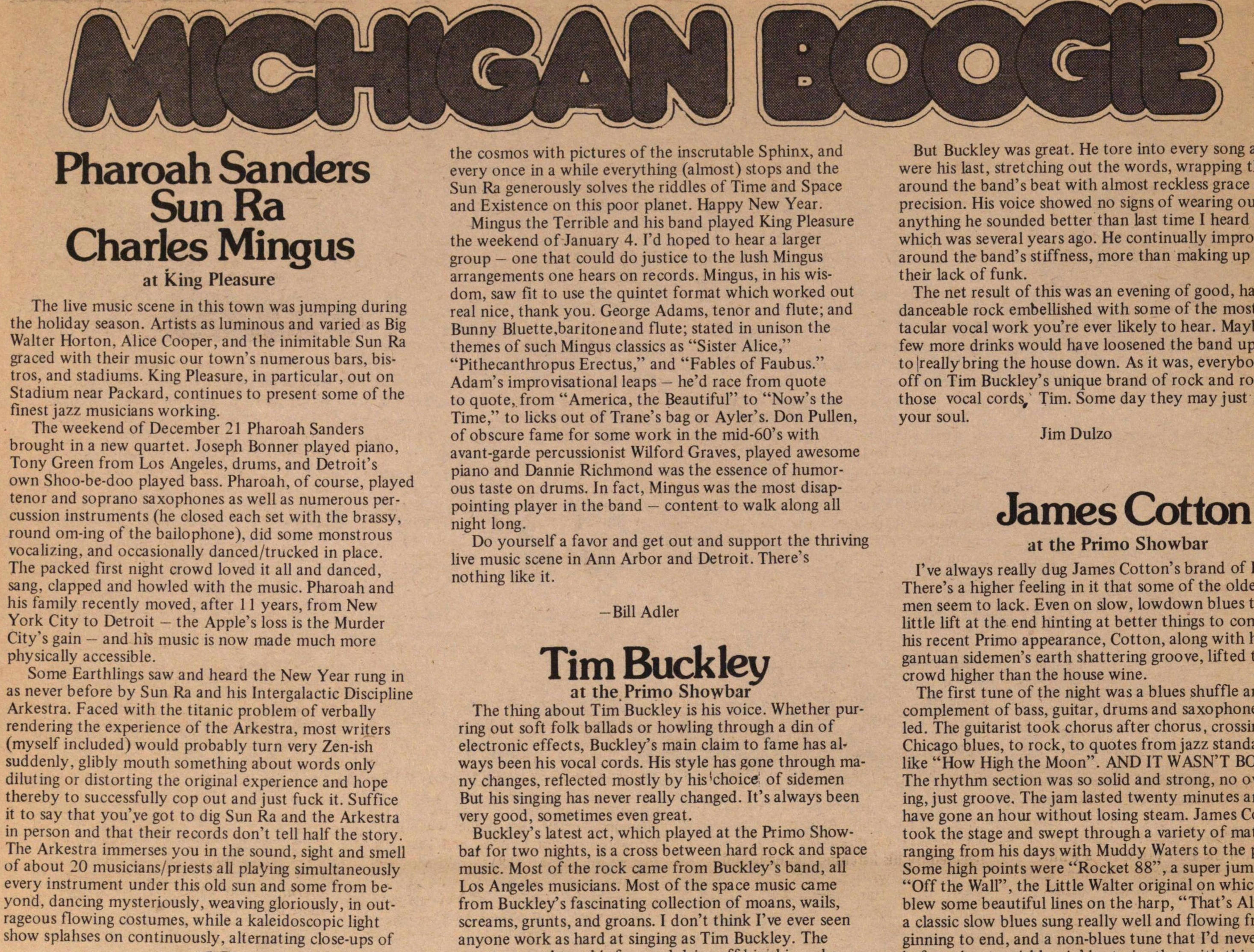 The live music scène in this town was jumping during the holiday season. Artists as luminous and varied as Big Walter Horton, Alice Cooper, and the inimitable Sun Ra graced with their music our town's numerous bars, bistros, and stadiums. King Pleasure, in particular, out on Stadium near Packard, continúes to present some of the finest jazz musicians working. The weekend of December 21 Pharoah Sanders brought in a new quartet. Joseph Bonner played piano, Tony Green from Los Angeles, drums, and Detroit's own Shoo-be-doo played bass. Pharoah, of course, played tenor and soprano saxophones as well as numerous percussion instruments (he closed each set with the brassy, round om-ing of the bailophone), did some monstrous vocalizing, and occasionally dancedtrucked in place. The packed first night crowd loved it all and danced, sang. clapped and howled with the music. Pharoah and his family recently moved, after 1 1 years, from New York City to Detroit - the Apple's loss is the Murder City's gain - and his music is now made much more physically accessible. Some Earthlings saw and heard the New Year rung in as never before by Sun Ra and his Intergalactic Discipline Arkestra. Faced with the titanic problem of verbally rendering the experience of the Arkestra, most writers (myself included) would probably turn very Zen-ish suddenly, glibly mouth something about words only diluting or distorting the original experience and hope thereby to successfully cop out and just fuck it. Suffice it to say that you'.ve got to dig Sun Ra and the Arkestra in person and that their records don't teil half the story. The Arkestra immerses you in the sound, sight and smell of about 20 musicianspriestsall playing simultaneously every instrument under this old sun and some from beyond, dancing mysteriously, weaving gloriously, in outrageous flowing costumes, while a kaleidoscopic light show splahses on continuously, alternating close-ups of the cosmos with pictures of the inscrutable Sphinx, and every once in a while everything (almost) stops and the Sun Ra generously solves the riddles of Time and Space and Existence on this poor planet. Happy New Year. Mingus the Terrible and nis band played King Pleasure the weekend of January 4. I'd hoped to hear a larger group - one that could do justice to the lush Mingus arrangements one hears on records. Mingus, in his wisdom, saw fit to use the quintet format which worked out real nice, thank you. George Adams, tenor and flute; and Bunny Bluette.baritoneand flute; stated in unisón the themes of such Mingus classics as "Sister Alice," "Pithecanthropus Erectus," and "Fables of Faubus." Adam's improvisational leaps - he'd race from quote to quote, from "America, the Beautiful" to "Now's the Time," to licks out of Trane's bag or Ayler's. Don Pullen, of obscure fame for some work in the mid-60's with avant-garde percussionist Wilford Graves, played awesome piano and Dannie Richmond was the essence of humorous taste on drums. In fact, Mingus was the most disappointing player in the band - content to walk along all night long. Do yourself a favor and get out and support the thriving live music scène in Ann Arbor and Detroit. There's nothing like it.