Tim Buckley At The Primo Showbar 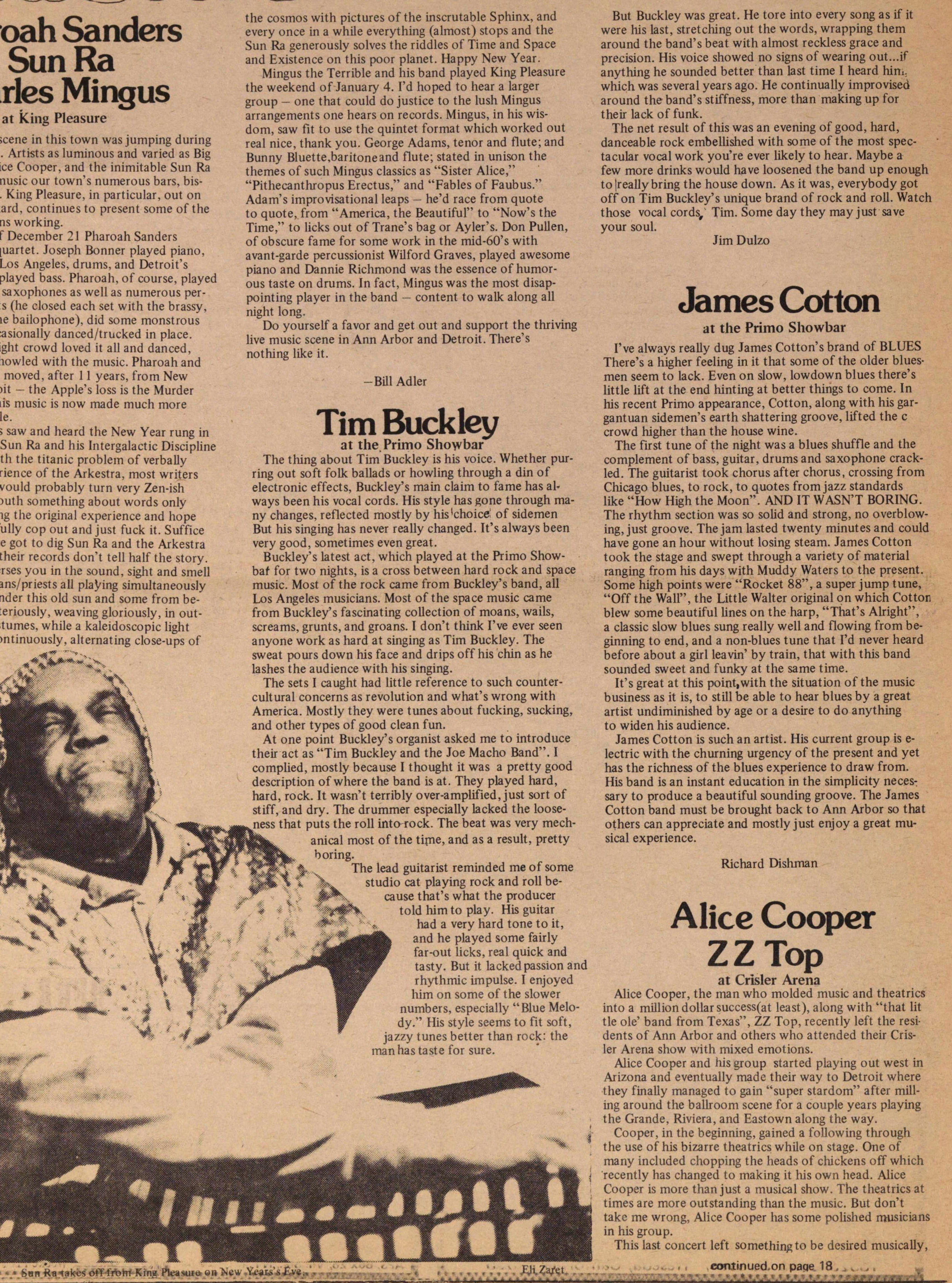 The thing about Tim Buckley is his voice. Whether purring out soft folk ballads or howling through a din of electronic effects, Buckley's main claim to fame has always been his vocal cords. His style has gone through many changes, reflected mostly by his choice of sidemen. But his singing has never really changed. It's always been very good, sometimes even great.

Buckley's latest act, which played at the Primo Showbar for two nights, is a cross between hard rock and space music. Most of the rock came from Buckley's band, all Los Angeles musicians. Most of the space music came from Buckley's fascinating collection of moans, wails, screams, grunts, and groans. I don't think I've ever seen anyone work as hard at singing as Tim Buckley. The sweat pours down his face and drips off his chin as he lashes the audience with his singing.

The sets I caught had little reference to such counter-cultural concerns as revolution and what's wrong with America. Mostly they were tunes about fucking, sucking, and other types of good clean fun.

At one point Buckley's organist asked me to introduce their act as "Tim Buckley and the Joe Macho Band." I complied, mostly because I thought it was a pretty good description of where the band is at. They played hard, hard, rock. It wasn't terribly over-amplified, just sort of stiff, and dry. The drummer especially lacked the looseness that puts the roll into rock. The beat was very mechanical most of the time, and as a result, pretty boring.

The lead guitarist reminded me of some studio cat playing rock and roll because that's what the producer told him to play. His guitar had a very hard tone to it, and he played some fairly far-out licks, real quick and tasty. But it lacked passion and rhythmic impulse. I enjoyed him on some of the slower numbers, especially "Blue Melody." His style seems to fit soft, jazzy tunes better than rock: the man has taste for sure.

But Buckley was great. He tore into every song as if it were his last, stretching out the words, wrapping them around the band's beat with almost reckless grace and precision. His voice showed no signs of wearing out...if anything he sounded better than last time I heard him, which was several years ago. He continually improvised around the band's stiffness, more than making up for their lack of funk.

The net result of this was an evening of good, hard, danceable rock embellished with some of the most spectacular vocal work you're ever likely to hear. Maybe a few more drinks would have loosened the band up enough to really bring the house down. As it was, everybody got off on Tim Buckley's unique brand of rock and roll. Watch those vocal cords, Tim. Some day they may just save your soul.