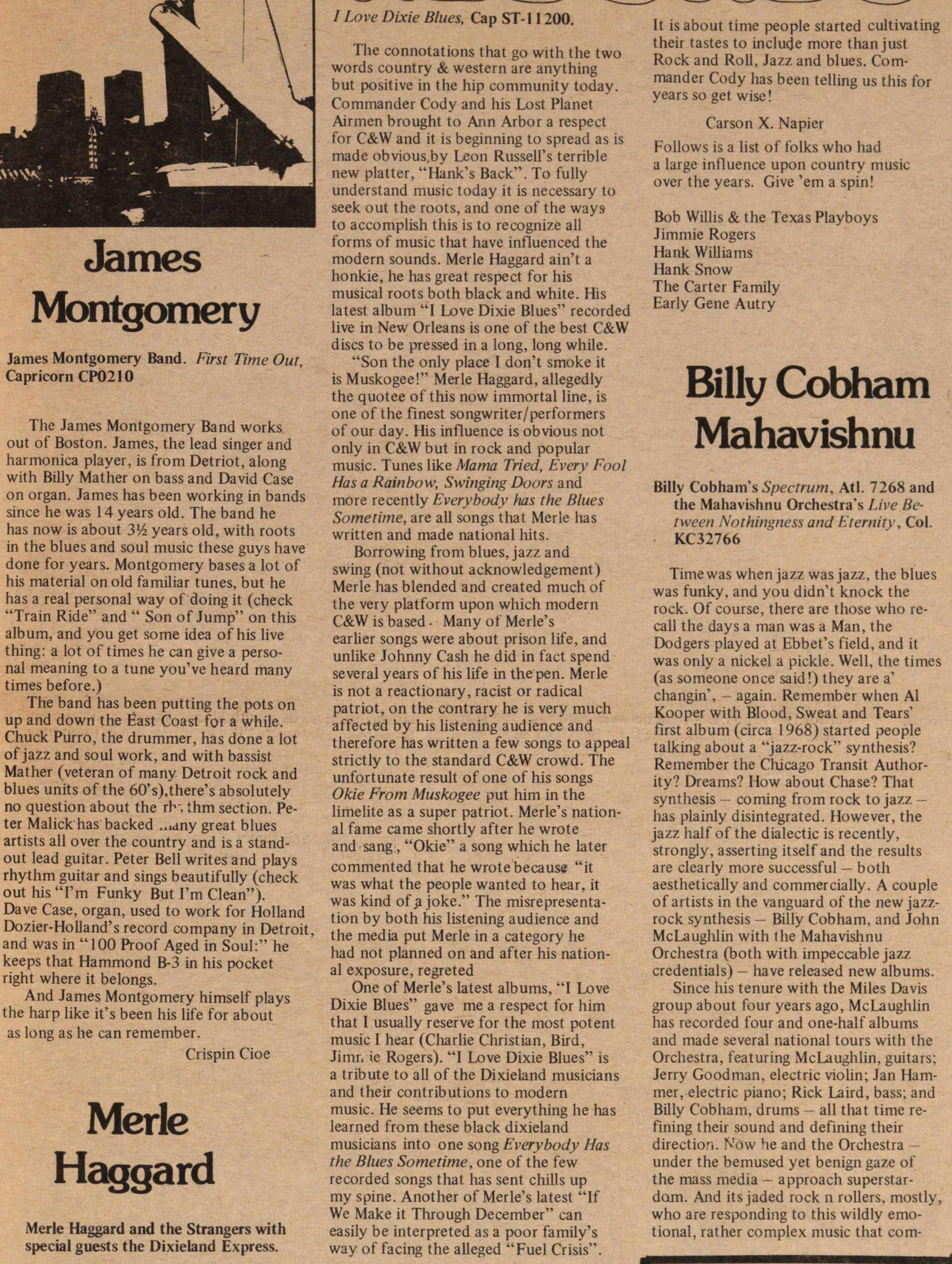 Merle Haggard and the Strangers with special guests the Dixieland Express. Love Dixie Blues, Cap ST-1 1 200. The connotations that go with the two words country & western are anything but positive in the hip community today. Commander Cody and his Lost Planet Airmen brought to Ann Arbor a respect for C&W and it is beginning to spread as is made obvious.by Leon Russell's terrible new platter, "Hank's Back". To fully understand music today it is necessary to seek out the roots, and one of the ways to accomplish this is to recognize all forms of music that have influenced the modern sounds. Merle Haggard ain't a honkie, he has great respect for his musical roots both black and white. His latest album "I Love Dixie Blues" recorded live in New Orleans is one of the best C&W discs to be pressed in a long, long while. "Son the only place I don't smoke it is Muskogee!" Merle Haggard, allegedly the quotee of this now immortal line, is one of the finest songwriter performers of our day. His influence is obvious not only in C&W but in rock and popular music. Tunes like Mama Tried, Everv Fooi Has a Rainbow, Swinging Doors and more recently Everybody has the Blues Sometime, are all songs that Merle lias written and made national hits. Borrowing from blues, jazz and swing (not without acknowledgement) Merle has blended and created much of the very platform upon which modern C&W is based ■ Many of Merle's earlier songs were about prison life, and unlike Johnny Cash he did in fact spend several years of his life in the pen. Merle is not a reactionary, racist or radical patriot, on the contrary he is very much affected by his listening audience and therefore has written a few songs to appeal strictly to the standard C&W crowd. The unfortunate result of one of his songs Okie From Muskogee put him in the limelite as a super patriot. Merle's national fame carne shortly after he wrote and sang, "Okie" a song which he later commented that he wrote because "it was what the people wanted to hear, it was kind of a joke." The misrepresentation by both his listening audience and the media put Merle in a category he liad not planned on and after his national exposure, regreted One of Merle's latest albums, "I Love Dixie Blues" gave me a respect for him that I usually reserve for the most potent music I hear (Charlie Christian, Bird, Jimr. ie Rogers). "I Love Dixie Blues" is a tribute to all of the Dixieland musicians and their contributions to modern music. He seems to put everything he has learned from these black dixieland musicians into one song Everybody Has the Blues Sometime, one of the few recorded songs that has sent chills up my spine. Another of Merle's latest "If We Make it Through December" can easily be interpreted as a poor family's way of facing the alieged "Fuel Crisis". It is about time people started cultivating their tastes to inclucje more than just Rock and Roll, Jazz and blues. Commander Cody has been telling us this for years so get wise! Follows is a list of folks who had a large influence upon country music over the years. Give 'em a spin! Bob Willis & the Texas Playboys Jimmie Rogers Hank WiUiams Hank Snow The Carter Family Early Gene Autry